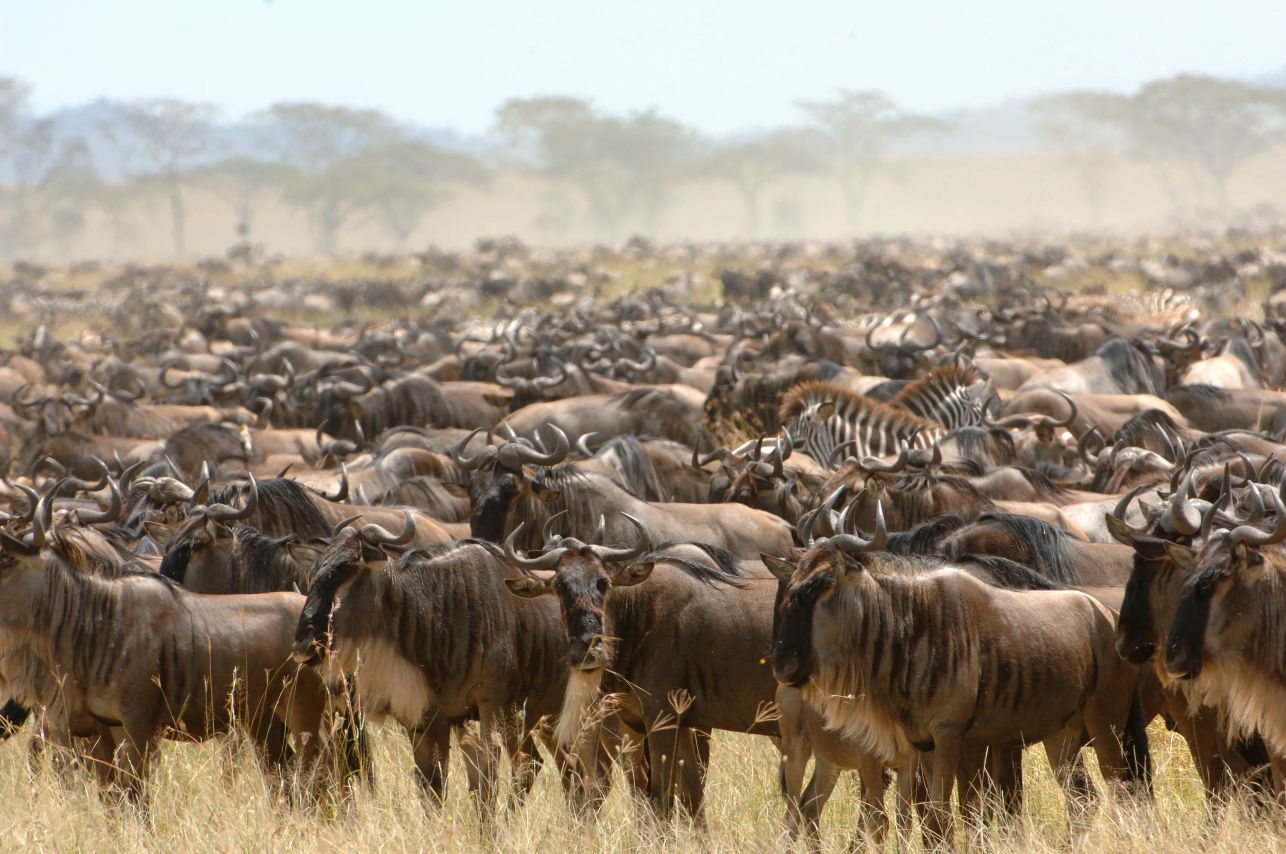 Here is everything you need to know to get the most out of Africa’s Great Migration, a natural phenomenon known as the greatest show on earth.

There is any number of amazing of sights and attractions to see and do on an African safari, but witnessing the Great Migration is usually high on most travelers’ bucket lists. And this is hardly a surprise. The Great Migration is undoubtedly one of nature’s most unforgettable spectacles: 1.5 million wildebeest accompanied by 200,000 or so zebras engaged in a never-ending journey, following the rains in a circular 1,200-mile route, through a wilderness that takes in the Serengeti National Park in Tanzania and Kenya’s Masai Mara Game Reserve.

What is the Great Migration?

First of all, it’s important to understand that the Great Migration is an on-going event, which doesn’t ever really end. Basically, it’s a circular grazing path determined by the availability of food. Literally, hundreds of thousands of wildebeest and zebra start in Tanzania’s Serengeti in January where they give birth to their young. The grass is still short in this part of the Serengeti, making it safer for the new-borns to stay protected from lurking predators. As the rains end, the herds start to move westwards, following the rivers on their way to the Masai Mara in Kenya. In summer they finally arrive, crossing crocodile-infested rivers to get there. And in the late autumn and winter, the herds move back towards the Serengeti, chasing the rainy season, and the process begins again. In essence, it’s a year-long search for food, water, and safety, and there are countless opportunities for safari-goers to witness all the beauty and drama along the way. 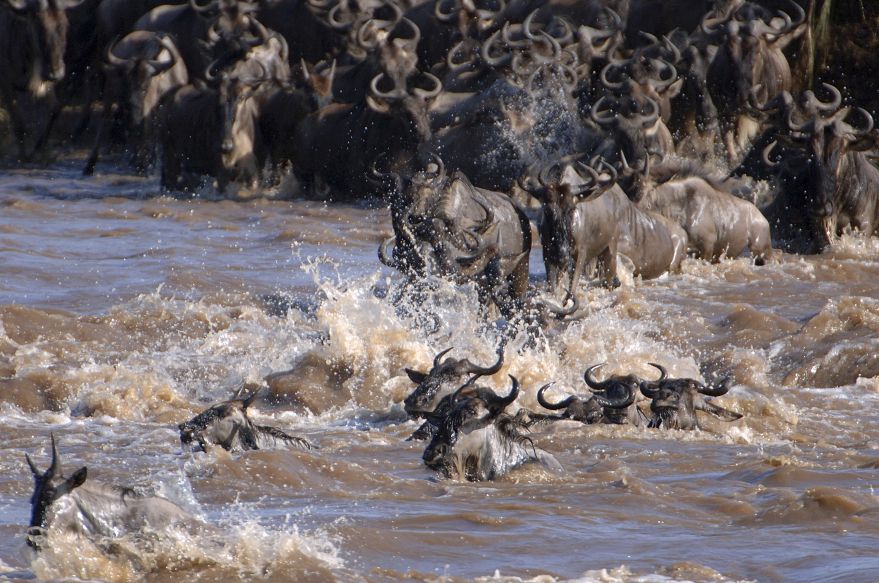 The major players on the Great Migration are undoubtedly the wildebeest, almost 1.5 million of them. And if you head out on safari in the first few months of the year, you’ll be guaranteed to see an awful lot of them. Traveling alongside the wildebeest are hundreds of thousands of zebra. And it turns out there’s a very good reason for this: zebra eat the longer grasses leaving wildebeest the shorter grasses, which they prefer. Zebra are also helpful in remembering the course of the Migration and keep a lookout for hungry river predators. Wildebeest return the favor by employing their incredible sense of smell to locate water sources almost every day of the Migration. But of course, there’s plenty other game to see as well including gazelles, elephants, lions, leopards, and cheetah – all part of the migratory entourage. So, if you go on safari during the Great Migration, as well as witnessing this incredible natural wonder, expect to see all of the animals typical to the African savannah.

The Best Way to See the Great Migration

One commonly held misconception is that all the wildebeests and zebras migrate together at the same time. Clearly given the huge numbers of creatures involved, the reality is quite different.

One of the best ways to see the Great Migration is from the safety of a safari vehicle. And depending on the time of year, expect to stop and watch as hundreds, if not thousands, of animals run across the road, spurred by a primal need to move and eat. But to fully appreciate the immense scale of the Migration it’s hard to beat a hot air balloon ride at dawn across the Serengeti, with endless herds of migratory wildebeest and zebra spread out below as far as the eye can see. 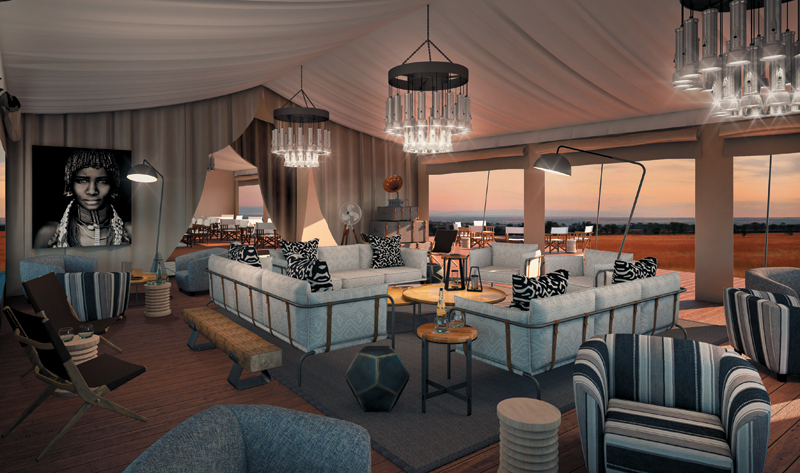 Another important element that can really elevate any safari experience is where you spend the night. So much more than just a place to lay your head, tented camps and lodges are an integral part of a safari. There are many safari camp operators offering spectacular safari experiences in Kenya and Tanzania, including Asilia Africa, AndBeyond, and Sanctuary Retreats, which operates a handful of remarkable properties located in some of the most beautiful and remote parts of Tanzania and Kenya, which make an ideal base from which to explore the local wildlife and to observe the Great Migration at close range.

One of these, Sanctuary Kichakani Migration Camp (above), is a special mobile-tented camp devoted entirely to the Great Migration, which moves as the herds move, transitioning from the Western to the Northern and finally the Southern part of the Serengeti throughout the year. This means that you won’t miss anything, no matter what time of year you choose to travel. Other great mobile camps include Asilia Africa’s Olikira and Kimondo camps, andBeyond’s Grumeti Tented Camp in the Serengeti and Bateleur Camp in Kenya, Singita’s Sabora Tented Camp, and Roving Bushtops, another mobile camp.