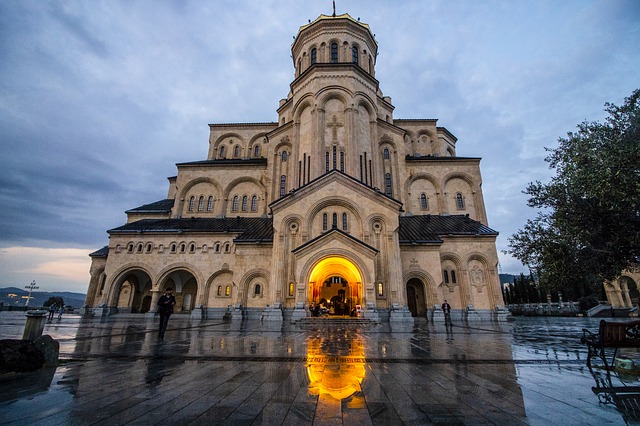 If Tbilisi conjures up thoughts of crumbling Soviet architecture, dilapidated infrastructure, armies of moody babushkas, and a stoic culinary scene, then think again. Georgia’s largest city is the capital of cool for the Caucasus and offers one of the region’s most fascinating and multi-faceted travel experiences.

Reaching Georgia from Asia, Europe or the US has become increasingly easy thanks to great connectivity through Kazakhstan with Air Astana. The award-winning airline connects the destinations of the CIS with the likes of Hong Kong, Bangkok, Beijing and Kuala Lumpur, as well as Frankfurt, and London.

Kick-off at one of the city’s coolest houses of slumber, Stamba Hotel, a member of Design Hotels. Housed in one of the city’s most important 20th-century landmarks, a former printing house, this uber-chic 150-room hotel is packed with nods to Georgia’s often tumultuous past, including Soviet-era propaganda printed within its hallowed halls. Look out for breathtaking freestanding brass bathtubs in suites; leave time for a dip in the spectacular glass-bottom rooftop pool, and have a flutter at the tables of the Art Deco-inspired Aviator Casino.

Time to give your bargaining skills a flex at the Dry Bridge Flea Market. Located near picturesque Dedaena Park, this fascinating bazaar has an eclectic mix of daily household items, intermingled with true gems from the country’s past, from Soviet campaign medals and revolutionary pin-ups to timeless estate jewelry. Increasingly the city’s young creatives are using the flea markets to sell homemade arts and crafts, ensuring an afternoon spent in wonder.

Return to the Stamba for some of the city’s freshest Georgian cuisine, at Café Stamba. A popular spot for both brunch and lunch, Café Stamba’s culinary teamwork with the Georgian Farmers’ Association to ensure all ingredients are sustainable and locally-sourced. The result is an unashamedly contemporary farm-to-table dining experience that’s best enjoyed on the restaurant’s outdoor terrace, which looks onto the hotel’s garden and amphitheater.

READ: These Are Our Favourite Private Island Escapes

Head to Tbilisi’s old quarter and Abanotubani, a district best known for its ancient Sulphur bathhouses – you’ll smell them before you discover their brick domes, which lead underground to the baths proper, each of which is lined with mesmerizing mosaics. While you can opt for a private room, complete with soak tub, the rule is complete nudity, so cast your modesty aside and select an exfoliating scrub or soapy massage using water that’s been at the heart of Georgian healing traditions for centuries. Afterward, cool down with a traditional Lagidze, mineral water spiked with sweet syrups, and dispensed from street-side soda vendors.

Tap into the growing local arts scene at the Zurab Tsereteli Museum of Modern Art, locally known as MoMA Tbilisi. While the majority of the museum is dedicated to local artist Zurab Tsereteli, the third floor showcases other Georgian talents as well as modern artists from across the Caucasus.

For the best views of the city, take the funicular up Mount Mtatsminda, one of several peaks that ring the city center. During the warmer months, this is a popular spot with locals, who visit the amusement park at its top, stroll the fairy light-lit lanes, and dine at some of the city’s top eateries, including Funicular, which offers staggering city views. Be sure to opt for the traditional Georgian menu for palate-pleasing dishes like Kachapuri cheese pastries, Shkmeruli, chicken cooked in a milk and garlic sauce; veal with forest berries, and green adjika, and Khinkhali dumplings, made to order.

For a unique nightcap, head for the Old Cellar wine bar, housed in a 17th-century wine cellar that now showcases one of the city’s best selections of Georgian wine. Georgia is the ancestral home of wine, and both traditional and more contemporary wines – many of which come from the popular Kakheti wine region and are fermented in traditional clay vessels called qvevri – are served either in the sumptuous private rooms upstairs or at the tasting bar in the cellar beneath.

READ: These Earbuds Promise You the Sleep of Your Life

Greet the morning from another great lookout, Narikala Fortress, which overlooks the Old City and Kura River. Established in the 4th century as a Persian citadel, the ancient structure is an icon of the city that’s evolved and expanded below and is accessed via a dramatic gondola that soars across the river from the Rike Park.