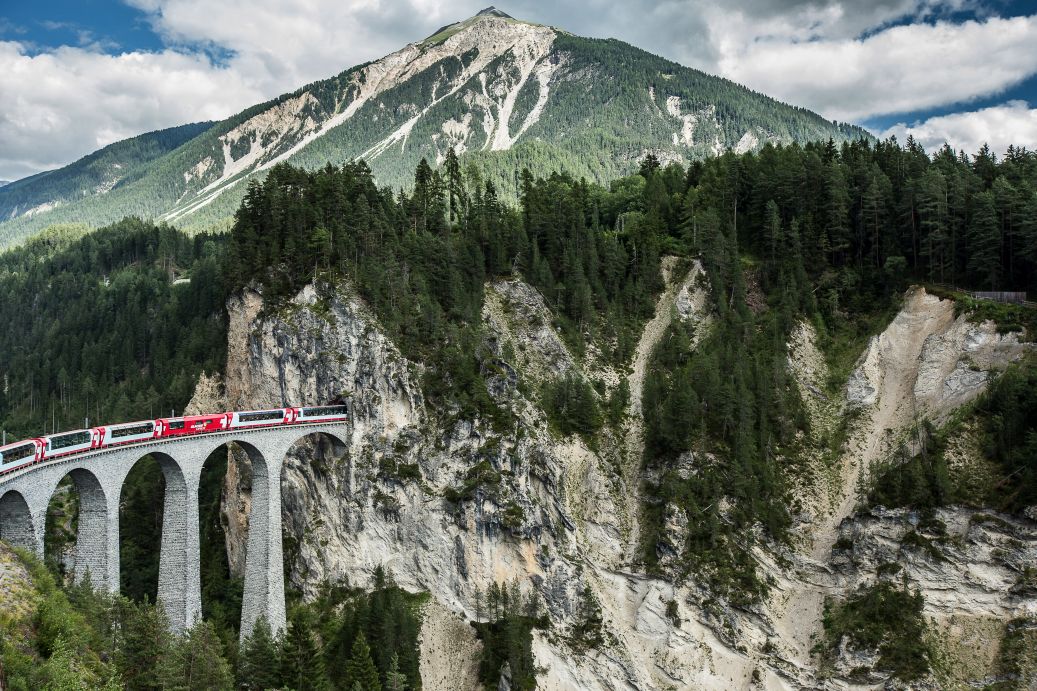 With its dramatic landscapes and world-class rail infrastructure, Switzerland is a must for train buffs and nature lovers alike.

Just as my eyes become accustomed to the absolute darkness of the tunnel, the latest in a string of cavernous jaunts during our two hour train journey from Zurich, we emerge for the last time and are welcomed by spectacular views across Lake Geneva, towering Mont Blanc, kissed with early summer sun, in the distance. Below the ancient, terrifically-steep vineyards of Lavaux roll down to the mirrorlike waters, and the towers of the medieval cathedral of Lausanne come into view.

READ: Explorer Jon Muir is a True Man of the Earth

Locals chuff when tourists marvel at this route between German and French-speaking cantons; for them, it’s the rail equivalent of a puddle jumper. But that’s because Switzerland has such a rich rail history – they’re just a little spoilt. The route between Zurich and Lausanne I’m on was first opened in 1861 and on June 1, 2016, that history welcomed its latest chapter as Switzerland opened the Gotthard Base Tunnel, the world’s longest at 57km. World-class rail infrastructure, combined with mesmerising alpine landscapes, means the land of cuckoo clocks and chocolate is also home to some of the most truly spectacular rail journeys on the planet. Here are our picks of the best.

One of the nation’s most iconic rail journeys is the Glacier Express, a route regularly listed among the best in the world thanks to the spectacular vistas between the Bernina massif and the Matterhorn. Linking the resort of St Moritz in Graubünden with Zermatt in the canton of Valais (with an extension to Davos), this fantastic route is serviced with a state-of-the-art train, complete with airline-style seating and panoramic windows.

While it’s called an ‘express’ this is leisure travel at its best (the train’s nickname is the ‘slowest express in the world’), as you traverse lush valleys, follow rushing mountain streams, duck through no less than 91 tunnels (including a few spirals), and leap across 291 bridges, including the vertiginous Landwasser Viaduct, located at the heart of the Unesco-listed Albula district. The highest point of the 7.5-hour journey is the Oberalp Pass at 2,044 metres and reaching that lofty point means inclines so steep that drinks are served in special tilted glasses so as to avoid spills.

Another crowd-pleaser for lovers of mountain passes and Heidi-esque landscapes is the Bernina Express, which climbs the peaks between St Moritz and Tirano (with a bus extension to Lugano). Built between 1906 and 1910, this unique Unesco-listed rail route passes through different climate zones and cantons where three different languages are spoken. Over four hours, you’ll enjoy the best of Switzerland’s mountainous heart, from rushing alpine rivers and sheer rock faces to lush forests and man-made marvels like the majestic Brusio Circle Viaduct over the Poschiavo Valley.

On one of the steepest adhesion railways in the world, travellers will pass through 55 tunnels and across 196 bridges as they climb to the Bernina Hospiz at 2,253 metres. Operated with modern carriages, this is a truly memorable day trip but true train buffs might like to book ahead for the historic Bernina Pullman train, pulled by the endearing ‘Crocodile’ locomotive.

READ: American Airlines’ Dreamliner Thrills on a Flight to Santiago

For something a little different, the William Tell Express experience combines both boat and rail. Linking Lucerne with Locarno as it crosses the Swiss Alps, the line takes its name from the Swiss folk hero (an archer with a unique approach to childhood nutrition).

If you’re travelling from Lucerne, you’ll travel the length of its namesake lake, a stunning patch of water wreathed on both sides by towering peaks, on a beautifully-preserved paddle steamer, which will stop at quaint waterside villages before arriving at Flüelen after just three hours. From there it’s on to a panoramic SBB train which takes the acclaimed Gotthard line, with its many spirals and tunnels, up the Reuss Valley and through the famed Gotthard Tunnel, emerging in the canton of Ticino.

If heights aren’t your thing, travel on the ultramodern GoldenPass Panoramic Express through the iconic Swiss landscapes of Interkalen and Zweisimmen between Lucerne and Montreux. In addition to some of the best alpine and lake landscapes in Europe, this is especially good for travellers bound for Geneva or Zurich’s international airports.

As well as the cities of Bern and Lausanne, both great for day excursions, the GoldenPass Panoramic Express meanders through the Brünig Pass, around the Giessbach waterfalls, and amongst the ancient villages of Interlaken. While you’ll need to change trains along the way, this is a route that has a little something for everyone and shouldn’t be rushed. For a real perk book one of the coveted seats in GoldenPass Super Panoramic Express, a glass bubble above the driver’s compartment.

READ: This is the Arctic’s Most Anticipated New Vessel

Last but not least, the Voralpen-Express connects Lucerne and St. Gallen, famed for its Unesco-listed abbey precinct. The route skirts Lake Zurich, cruises among the soaring peaks of the Schwyzer Mythen, makes its way through the deep valleys of the Pilatus Mountains, and across the high Rothenthurm moor, before chugging across the Sitter Viaduct, the highest in Switzerland.

Travellers pass through the ‘rose town’ of Rapperswil, steam around the lakes of Zug and Lauerz and over the dam which separates the Obersee from Lake Zurich. The beauty of this route, which takes three hours, is the hourly train schedule, meaning travellers can get on and off as they please, making this one of the most flexible routes in the country.

Belmond to Launch New Luxury Champagne Barge in May

The 7 Best Sites for Penguin Spotting