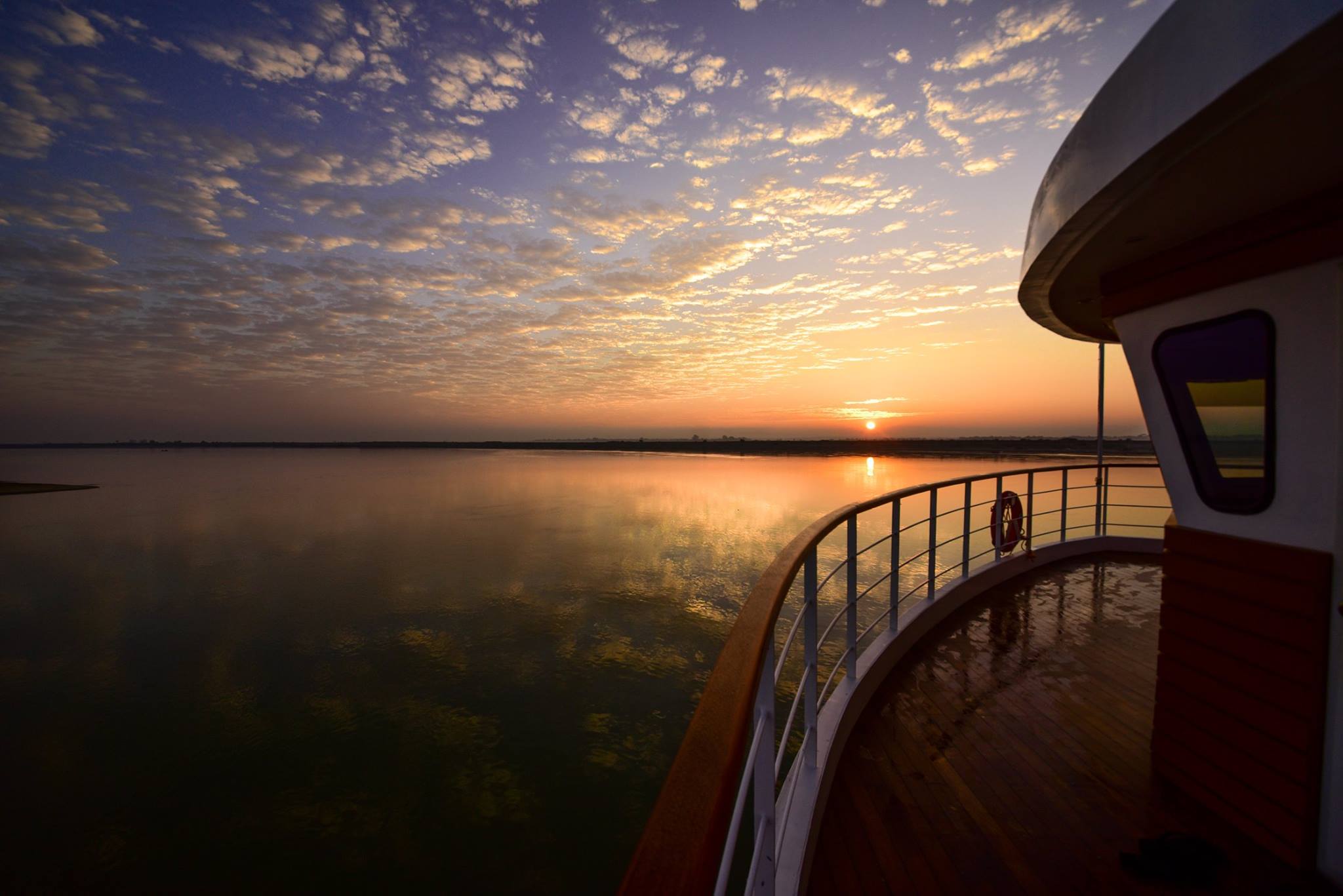 It’s a captivating sight as our grumbling little prop plane descends through wispy cloud cover, catching the first rays of morning just as they bathe Bagan’s thousands of terracotta temples in gold. An armada of hot air balloons in maroon, teal, and mandarin rises above the vibrant landscape to greet the sunrise and the whole mesmerizing scene is captured by camera-toting travelers glued to their Perspex windows as we line up for our final approach.

Myanmar is filled with magical moments like this, when the nation’s rich heritage and its bold future meet like waves lapping at a shoreline. One of the fastest emerging destinations in the world, Myanmar has tried hard to leave its turbulent past behind and now welcomes travelers of every persuasion, from backpackers and pilgrims to well-heeled world wanderers looking to capture the perfect shot of Bagan’s temple plains from a thousand feet up.

However, there is one thing that binds many travelers to Myanmar, and many of the destinations they seek to visit: the Ayeyarwady River. For centuries this mighty waterway (also spelled Irrawaddy) has been the lifeblood of Burma. More recently it has helped travel companies take their first tentative steps into Myanmar, with luxurious river cruisers plying the gentle waters between ancient former capitals like Mandalay, Bagan, and Sagaing. One of the newest arrivals is The Strand Cruise, an aquatic incarnation of Yangon’s luxurious, century-old hotel.

READ: The Slow (But Luxurious) Train to Titicaca

The ship’s crew meet us at Bagan’s pint-sized airport and escort us to breakfast, served in the serene grounds of a local lacquer workshop. As we dine on fresh croissants and fruit, artisans polish and intricately decorate lacquer boxes, alms bowls, and traditional puppets in the shade of a stilted studio, but it’s not long until we’re off to explore this most thrilling of Burmese destinations.

As the sun climbs high in the sky we visit the iconic Shwezigon Pagoda, part of the Bagan Heritage Trail. Its gold-leafed flanks shimmer in the dazzling morning sunshine as tourists mingle with locals and religious pilgrims. At the ancient Ananda Temple nearby, monks wrapped in crimson robes celebrate a religious festival with a feast while chanting echoes through the shrine’s smooth, stone halls. One of the most important temples in the country, we tour Ananda’s corridors and gaze up at its four gilded Buddhas in the company of experienced local guides, who map out the rise and fall of the Pagan Kingdom which once dominated modern-day Myanmar.

We soon arrive at the 54-passenger RV Strand Cruise, meeting her at the edge of a gentle curve in the river, the ship’s bright white façade striking against the earth tones of the rural landscape. Smiling young waiters offer new arrivals cold drinks and moist towels as they guide them to one of 27 staterooms. My main deck deluxe cabin, with its queen-sized bed, teakwood floors, writing desk, and ample sized bathroom faces the riverbank and from its floor-to-ceiling Juliet balcony, I watch children play in the shallows below.

The first thing you notice is how elegantly appointed the ship is; there’s timelessness at play but with a contemporary undertone that makes the décor undeniably luxurious yet refreshing. Black and white photos in black lacquer frames line rich teak bookcases; golden rice bowls cling to the main stairwell forming a shimmering mural, and there’s a faint smell of polish and beeswax mixed with rich coffee and subtle spice in the air. Despite its heritage cues, The Strand Cruise is a modern homage to Burma’s history, rather than a floating mausoleum to the past.

READ: The North Face’s Terra 65 Jacket Will Ensure You Survive in Style

The top deck is the heart of the ship, with its little (and bracingly cold) plunge pool, its wrap-around decks, and its army of sun loungers. As the sun hangs low in the sky, guests gather in the sumptuous bar or at the rattan lounge suites which line the shaded deck and sip cocktails the same color as the clouds above. The light draining from the sky leaves the tops of Bagan’s 2,500 odd temples, stupas, and pagodas in profile against a sky the color of amber.

The next morning the views from Tant Kyi Pagoda, also known as The Glass Monastery, are equally enchanting. Far below the Ayeyarwady meanders through a vast flood plain, the silhouettes of an army of 11th-century stupas stark on the horizon. It’s hard to imagine things as they must have been; each of Bagan’s thousands of stupas and pagodas (researchers believe the river has swallowed up many hundreds more) was built not in isolation but surrounded by family homes, businesses, schools, and monasteries. A thriving civilization once dwelled here beside the river. Centuries later, its crumbling houses of worship would inspire writers like Rudyard Kipling and George Orwell.

READ: These Are Not Your Average Honeymoon Travel Ideas

There’s plenty to be inspired by as we sail north, our course at the whim of the river, and its ever-shifting sandbanks. Despite a raft of sophisticated technology at their disposal, the crew still navigate the river using traditional striped poles, which they dip into the caramel colored waters in long, arching sweeps. At some points, the riverbed rises up to greet us and the first mate is sent ahead in a small boat to poke and prod our way around the obstructions. We pass less prudent vessels, great plumes of exhaust enveloping them as they struggle to pass an unexpected sand bar.

The long afternoon, evening, and following morning spent cruising is a great chance to explore the ship and soak in the lingering landscapes uninterrupted. Beyond the bar, with its Cuban cigar humidor and single malt whisky collection, is an intimate library filled with stories of Southeast Asia, of river life, and of Burma’s colonial era. A tiny spa proves popular in the late afternoon when guests book themselves in for full-body massages, facials, and invigorating scrubs. Many others bask in the afternoon sunshine around the pool or join the captain in the bridge as the ship passes riverside villages and toots to convoys of colorful local ferries.

Dining is a lavish affair onboard RV Strand Cruise. Breakfasts are lingering meals that fuel guests for their daily excursions, whether it’s exploring Ava by traditional horse cart, or walking the length of the famed U Bein Bridge, while sun deck lunch buffets are a great way to enjoy both the cuisine and the landscapes of one of Asia’s most beautiful nations. The traditional afternoon tea served at The Strand Hotel is replicated late one afternoon, with delicate cakes and china pots of locally-sourced tea, while dinners, served in the dark and sexy Strand Restaurant, are a symphony of influences, textures, and traditions.

There’s always something new on offer; after an afternoon exploring the whitewashed terraces of the Paya Hsinbyume pagoda in Mingun, crew construct a bonfire and host an impromptu cocktail party on a remote sandbank, and on the last night we’re treated at a traditional banquet influenced by the cuisine of Myanmar’s remote Shan State.

Of course, every new operation has its teething problems and The Strand Cruise is no different. The itinerary, which traces the most popular tourist route in the country, is quite generic, making it ideal for first-timers to Myanmar or for those looking to relax rather than temple hop, but not for travelers looking to truly delve into the destination. A little miscommunication means elements of that same itinerary never take place, including our own balloon ride over Bagan and an early morning alms ceremony with local monks that many in our group were looking forward to.

However, the ship’s beautiful design, the attention to detail of its décor, and The Strand Cruise’s hard-working crew, who are happy to go above and beyond for every passenger, will ensure it won’t be long until it’s an icon in its own right.

Fly: Cathay Pacific connects Yangon with points across Asia, Europe, and North America.
Cruise: Bagan to Mandalay on The Strand Cruise over four nights from US$1,976 per person.

Seven Seas Explorer to Delve into Oceania in 2023