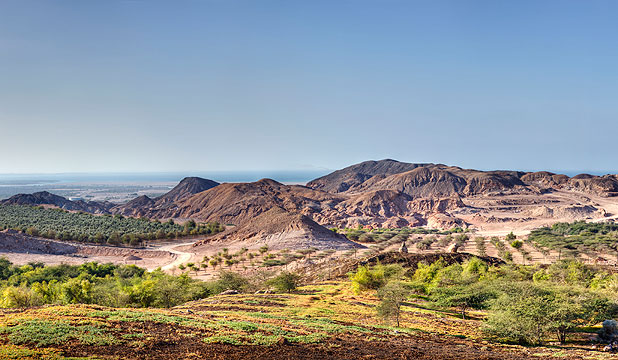 Abu Dhabi’s founding father had a vision for his private royal retreat on Sir Bani Yas Island, and years later, his legacy – and his hopes for the future – are reaching fruition.

The cheetahs of Desert Islands have risen early, the youngest finding a spot on a low sand dune that’s been warmed by the already intense Arabian sun. A light breeze riddled with fine salt crystals washes over the desolately beautiful landscape, scattering dust across the desert and howling through the bone dry wadis. The cheetah, backdropped by a deep blue sky, looks across to me and my Moroccan guide Mustafa with a sense of tranquillity. Perhaps because he is on one side of the fence and we – and his older, rather territorial brothers – are on the other.

This is Sir Bani Yas, a teardrop-shaped island of rock, sand, and salt domes located a few hours west of Abu Dhabi’s towering skyscrapers. Ancient, weathered, and otherworldly, its barren beauty reaches in and touches the nomad in every visitor. It’s a place of whispering winds, of turquoise seas that can erupt into white-capped chaos, a place where it’s hard to judge distance with the eye, and where the nothingness constantly turns into something beautiful. Now a plan first envisioned by Abu Dhabi’s founding father Sheikh Zayed Bin Sultan Al Nahyan is nearing fruition, leaving Sir Bani Yas with one foot in the past and one firmly planted in tomorrow.

Part of the Desert Islands, a group of six rocky cays scattered across the western coastline some 250km from the capital, Sir Bani Yas has long had a place in the hearts of the UAE’s ruling family. From the heights of the mountain-like salt domes which dominate the heart of the island, the ornate towers and fertile gardens of the island’s royal palace can be seen. Although rarely visited by royalty now, for decades the island was Sheikh Zayed’s private reserve, a place to take a reprieve from the demands of nation-building. 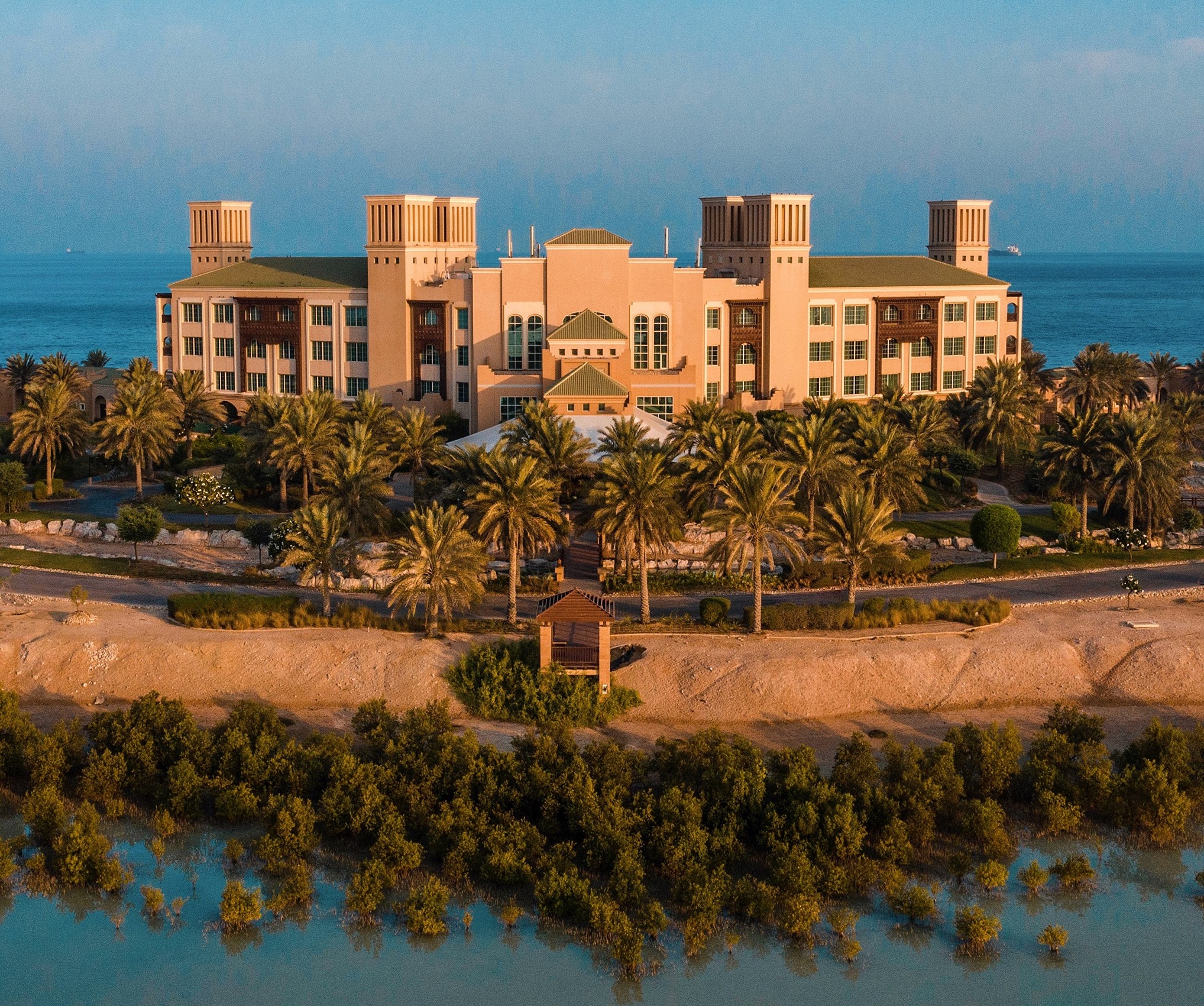 It was during his frequent stays that he envisioned the island’s reincarnation, implementing extensive irrigation as part of a Greening of the Deserts policy, and introducing many species endemic to the Arabian peninsula, including endangered Arabian oryx and dainty, lightning-fast mountain gazelles.

Now Sir Bani Yas plays an integral role as the first of the eight Desert Islands to welcome visitors, many of whom stay at the luxurious 69-room Desert Islands Resort & Spa by Anantara, a hotel that’s as much a safari camp as it is a beach resort. Located on a strip of pristine coast a 15-minute drive from the ferry pier, the resort combines the island’s Bedouin heritage with luxurious surrounds, gourmet cuisine, and a stunning collection of activities and tours that showcase the island’s unique attractions.

My villa at Desert Islands, one of three, is a splendid place to be marooned. An expansive living room opens out onto a private courtyard with a plunge pool, while off the main bedroom, which is the size of an aircraft hanger, a bathroom dressed in honey-hued marble features a deep soak tub and one of the largest showers I’ve ever seen.

The luxury continues at the nearby Anantara Spa, where authentic Thai and Ayurvedic treatments are infused with Bedouin culture and conducted in treatment rooms overlooking the tranquil Persian Gulf. There is nothing quite like finishing a long day exploring the island than with an intimate massage, including the signature Sands of Time, a 135-minute treatment that incorporates a floral foot ritual, a vigorous sports massage, and a compress using fine desert sand. 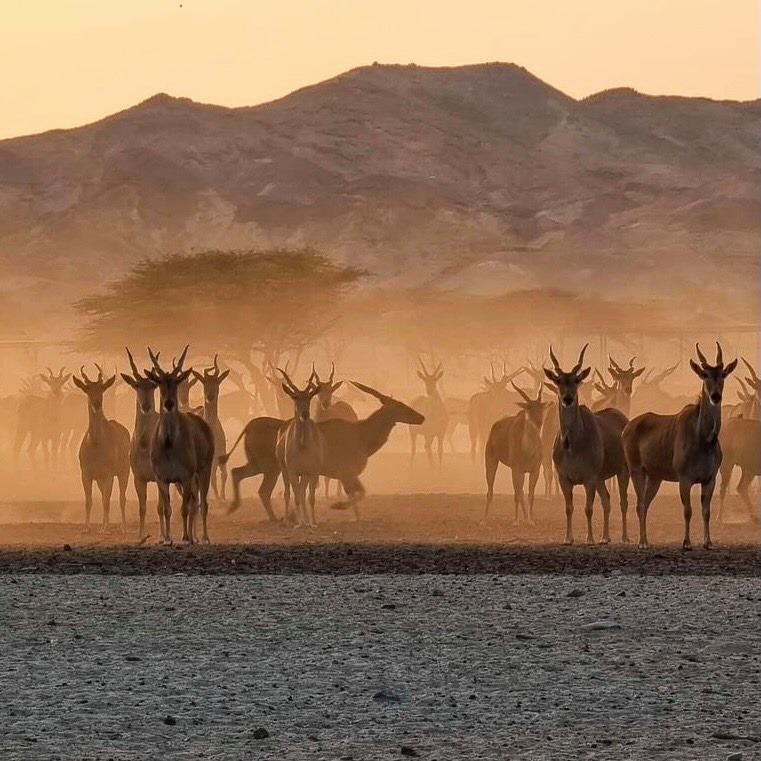 But it’s the activities that an increasing number of locals and international visitors come to Sir Bani Yas to experience. At the center of the island, taking up more than 4,100 hectares is the Arabian Wildlife Park, the conservation and protection program that is home to several thousand roaming animals, including Arabian oryx, once extinct in the wild and now numbering 400 strong.

To create a realistic ecosystem, five cheetahs, as well as families of striped hyenas were introduced and although they are not endemic to the region, they remain some of the biggest drawcards, as do the graceful articulated giraffes and flamingo, ostriches, gemsbok, and more. The island is also home to migratory birds, millions of which stop to rest on their way to or from Asia and Siberia, while the seas around the island are home to sea turtles, dolphins, and dugongs.

After watching the young cheetah, Mustafa and I continue driving, and an early morning breeze scatters dust through ranks of sand gazelles grazing among rows of Frankincense, Arabic gum, and Christ’s Thorn trees. Plump, stout oryx trot down worn paths through the trees, and the heads of giraffe crossing the dunes can be seen above the tree line. 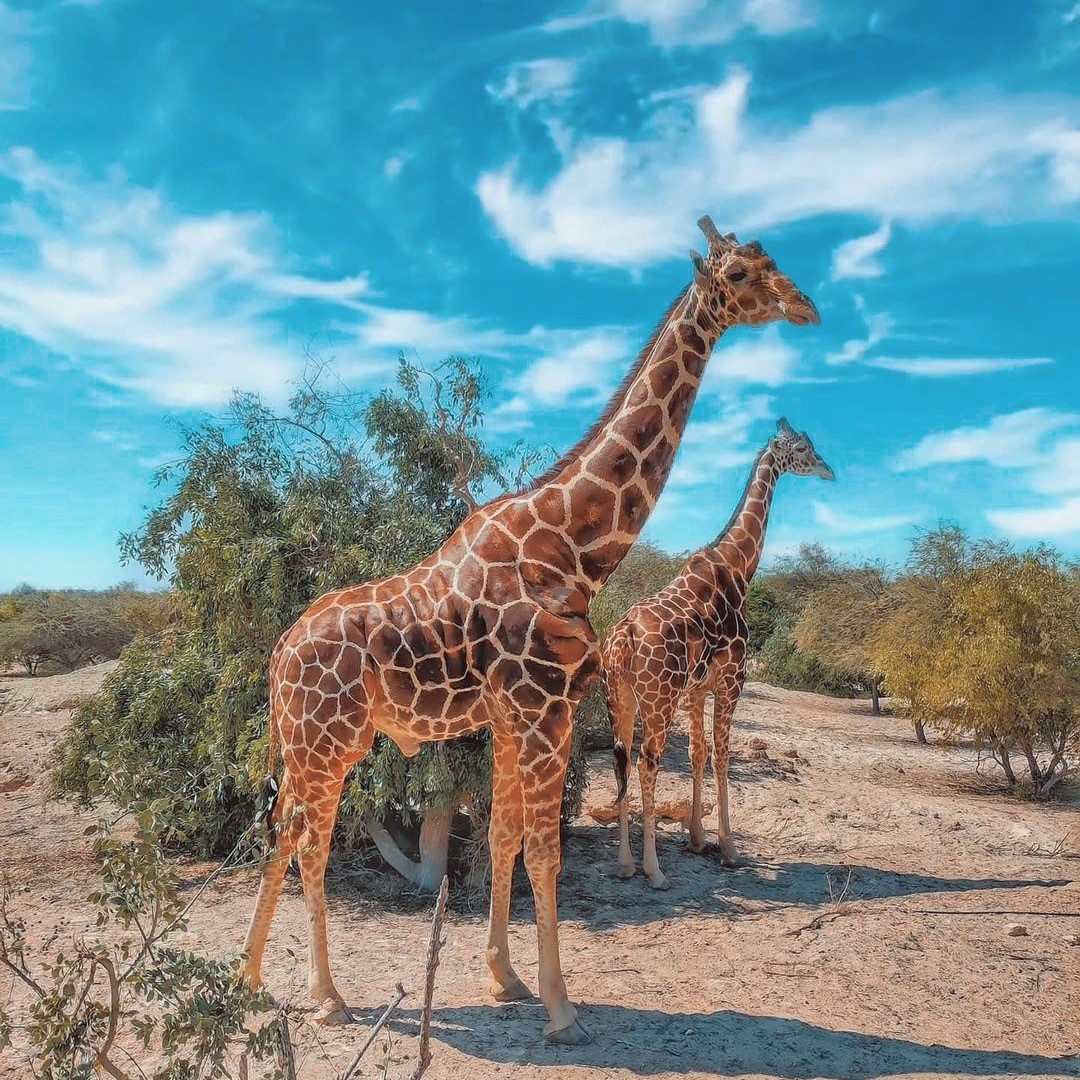 The best way to encounter these animals is with one of Desert Island’s game drives, conducted in extended Land Cruisers with canvas sides. The professional guides, many of whom are from the game parks of South Africa, are extremely knowledgeable about the animals found in the park, and about the program to reinvigorate the island, including the planting of millions of trees and the extensive irrigation systems being installed in the bare mountainsides. There is a sense of passion, of collective vision and fortitude shared by all who live here – from the game guides to the bell boys – and it’s difficult not to be whipped up by the quiet confidence and pride.

There is plenty to do on Sir Bani Yas. The daily game drives are complemented by mountain biking, archery, sailing, snorkeling, and wadi walks down ‘hyena alley’ to learn how the volcanic island was formed. An extensive new water sports complex is about to open at the Resort, offering access to the region’s stunning blue ocean dive spots, while a modern stables facilities is in the final stages of completion, with proud Arabian horses brought from pedigree breeders around the globe to offer everything from beginner rides to horseback safaris.

Despite the move towards tourism, the island’s key policy is one of preservation and restoration. Mustafa and I wind our way up dusty trails to a fenced-off enclosure where teams of archaeologists from the UK and US spend the cooler months preserving and researching the remains of a Nestorian Christian monastery, which dates back to 600AD. The monks who once lived on the island were fishermen and would offer mass to passing traders. The church’s restoration is no easy task; its foundations are covered to protect them from the sun and the wind but it’s obvious that the preservation is painstaking work and for the church to be given such reverence in a Muslim country like the UAE is inspiring. 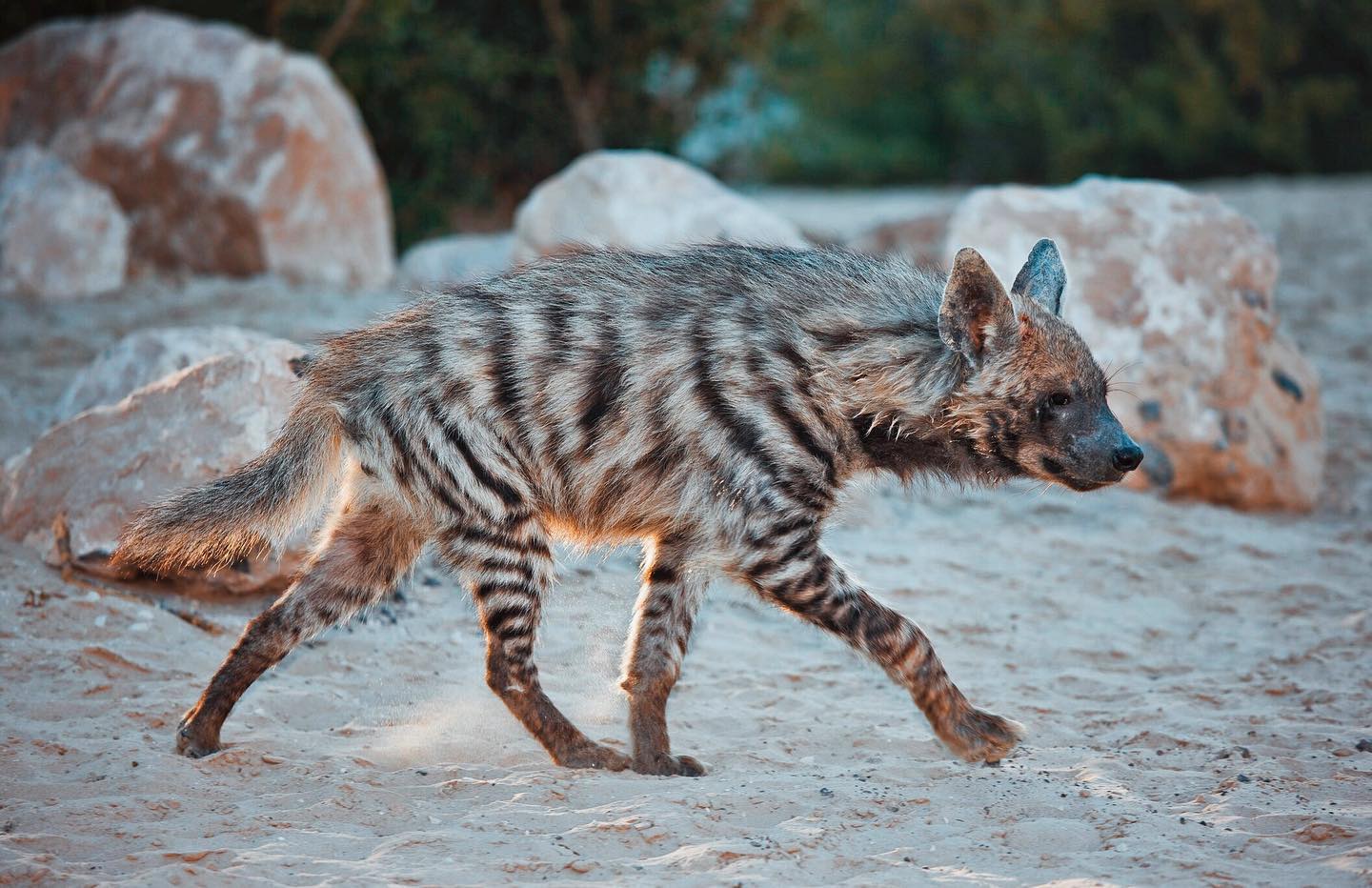 From the height of the desert plateau on which the church site sits, I can see the future of Sir Bani Yas. The sounds of hammering and sawing can be heard from the construction site of a new state-of-the-art convention center at the Desert Islands Resort & Spa. It’s hoped the complex will pick up a wide range of business and incentive events from throughout the Gulf region. I follow the coastline down from the Resort to where Al Yamm Lodge, a new luxury hotel comprising 30 private bungalows, nears completion on one of the island’s best beaches. Another, the 30-villa Al Sahel Lodge, is planned for the heart of the Arabian Wildlife Park, offering the chance for even more guests to rise early and start their day on the dunes with the cheetahs of Sir Bani Yas.

Is This the Future of Luxury Cruising?