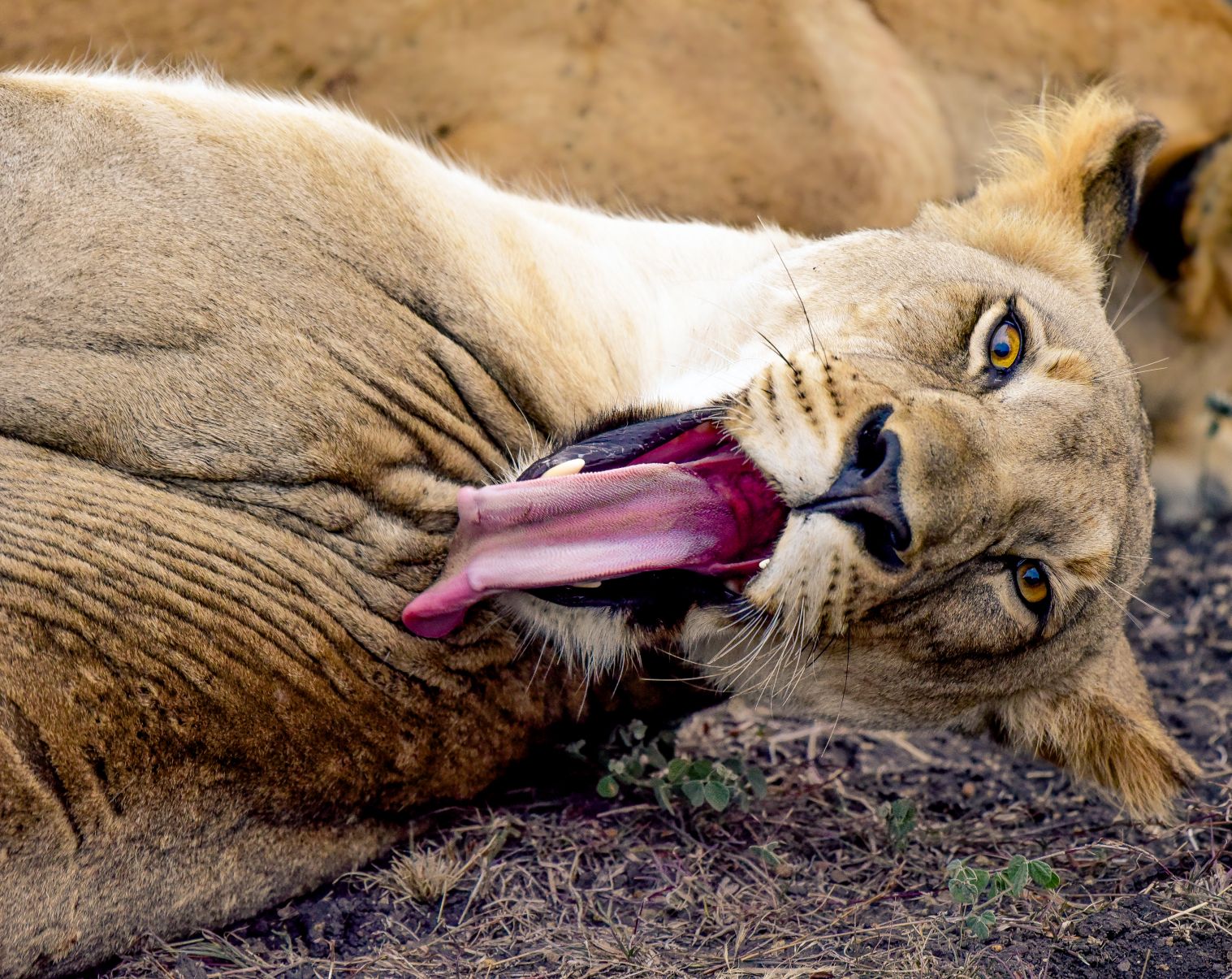 It’s a standoff of sorts. The adolescent white rhino, his buddies backing him up like a Westside Story chorus line, blocks the dirt track before us and studies our group with earnestness. A wave of silence washes over our Land Cruiser, broken only by the buzz of camera shutters. With a gentle snort, a flick of an ear, and a perfectly executed balancé that illustrates the fluid grace bestowed on such a bulky beast, the rhino lets us pass and we all start breathing once again.

Thrilling wildlife experiences like this are par for the course at the 23,000-hectare Phinda Private Game Reserve in South Africa’s northeast province of Kwazulu-Natal. An icon of progressive conservation for the country, Phinda is unique in that it hosts seven distinct ecosystems, offering a magnificent tapestry of woodlands, grasslands, wetlands, and forests, interspersed with mountain ranges, rivers, marshes, and even dramatic stretches of coastline. These ecosystems are, in turn, home to an abundance of protected and sustainably-managed wildlife, from the Big Five, to cheetah, giraffe, crocodiles, zebra, and a who’s who of the antelope world, offering a captivating and sustainable one-stop safari experience.

The expansive reserve is also home to six safari camps operated by andBeyond, each of which offers visitors access to a different stage on which some of South Africa’s best wildlife encounters take place.

My adventure begins at andBeyond Phinda Forest Lodge, a clutch of 16 luxurious glass-and-timber cottages scattered throughout one of Africa’s last remaining dry sand torchwood forests, which offers the perfect camouflage for the shy Livingston’s suni and red duikers which skulk silently past my floor-to-ceiling windows.

READ: This Tented Camp Brings Out Cambodia’s Wild Side

Here, each suite is its own domain, one in which you can disappear from the world amidst refined, contemporary interiors more akin to a chic Long Island beach house than a safari camp. There are plush throw pillows, a fully-stocked minibar, and a deep soak tub, and thanks to picture windows on all sides, a sense of place that’s both cozy and captivating.

Walking from suite to lodge, you’re likely to encounter nimble nyala and impala on the sandy trails, while above, giant kingfishers and melba finches frolic in the canopy. During al fresco meals served on the main lodge’s sundecks, elephants tussle in the nearby reed beds, and troops of vervet monkeys leap from branch to branch above.

The deck and its adjacent lounge is the hub of activity at Phinda Forest; it’s where meals are served and sundowners sipped before mesmerizing African sunsets. It’s also from where we depart on our first game drive with young yet experienced guide James Walker. Mounting one of the camp’s custom Land Cruisers, we rumble along dirt tracks arched by graceful fluted milkwood and brown ironwood trees, leaving the forest behind as we delve into the grasslands.

James has an eagle’s eye and it’s not long until he spots the gang of rhino teens sauntering towards us across a vast plain punctuated by black monkey thorn trees. The rhinos, each weighing over a ton, totter along a risen sandbank, eyeing us the whole time as they approach a watering hole where their kin sniff the air between gulps. They shuffle onto the road in front of us and the standoff ensues.

Of andBeyond’s many conservation initiatives, Rhinos Without Borders, a campaign born from the first donation of rhino from one reserve to another, is perhaps the most important. With a rhino killed by poachers in South Africa every seven hours during 2015, costly relocation, often to Botswana’s sprawling but better secured Okavango Delta, is the only chance South Africa’s rhinos have for survival. Over the coming years andBeyond, in partnership with Great Plains Conservation, will relocate 100 rhinos to undisclosed locations in Southern Africa in order to give the species a fighting chance.

READ: Keep Your Lips Protected From the Elements With These Savvy Solutions

Once you settle into the Phinda landscape you quickly begin to see how busy it is with wildlife. A pair of male zebra wrestle on hind legs, flashes of barcode backdropped by against the grassland’s greens and yellows. A lilac-breasted roller, a beautiful little bird whose vibrant rainbow hues seem at odds with the green patchwork landscape, waits patiently atop a sapling for us to take its photo, before darting away. Nestled in a sandy den, we watch, enthralled, as a spotted hyena feeds her cubs, aware of our presence but not hindered by it.

James takes a turn off the main trail and suddenly we find ourselves face to face with a meandering herd of towering elephants. We back up to give the majestic beasts space, although one calf, barely the height of the Land Cruiser’s bonnet, feels emboldened by his company, his ears outstretched, his little trunk high in the air as he struts, steps from the safety of Dad. After a breathtaking moment during which elephants and humans watch each other intently, the former slip soundlessly into the thick brush.

During a late afternoon drive, we trace a long boundary trail to discover a pride of lions; two young cubs play fight as the adults doze, huge gleaming white teeth revealed as they yawn, their golden tails capturing the fading light as they flick the air. Slowly, one by one, the lions emerge from their afternoon siestas and, as the sun begins to sink towards the horizon and the shadows lengthen, they depart on the night’s hunt.

The light drains quickly from the African sky as we return to the camp, a pair of graceful giraffes, startled by our headlights as we emerge from a dry river bed, galloping towards the setting sun as we’re once again engulfed by the serenity of the torchwood forest.

The next day we head southwest towards sister retreat Phinda Mountain Lodge but on the way, there’s time for an andBeyond Community Tour, a collaboration with development partner The Africa Foundation, which has many initiatives in the villages that wreath Phinda. During the fascinating three-hour tour with guide Bheki we visit the Ubuhlebenkosi creche, a patchwork tent filled with smiling children who sing the national anthem loudly and proudly, before we inspect their new school, presently under construction nearby.

When these same children go to high school it will likely be at Nkomo Full Service School; its principal Nomusa Zikhali once had to ferry children across a rushing river to get them to her open-air classrooms, set beneath a great acacia tree. With help from the Africa Foundation, Nkomo now has 500 students and a series of modern classrooms. On our return to the reserve, we stop in at the Mduku Clinic, where vital accommodation for nurses is being built, while at the Mbhedula Craft Market nearby, another Foundation project, the sales of brilliantly-colored art pieces, crafted by local women, bring much-needed income to the village.

Under a ceiling of brooding clouds that look set to burst, we approach andBeyond Phinda Mountain Lodge. With its panoramic views of the spectacular Ubombo ranges, Phinda Mountain Lodge is as dramatic a safari retreat as you’ll find anywhere in Africa and a true contrast to the torchwood forest. Each of its 24 cathedral-esque suites, clustered on a steep mountain flank, features master bedrooms and bathrooms that lead out on to expansive private verandahs, which, in my case, seems to be part of a vervet monkey highway, making for some interesting eye-to-eye interactions during moonlit outdoor showers.

READ: We Explore Remote Raja Ampat Aboard the Alila Purnama

The next morning we chase the dawn with Andy Macfarlane, an east coast surfer-turned-wildlife guide, and tracker Sibu. After inching our way past a snoring warthog at the lodge entrance, we delve into the mists which cling to the mountains like cotton candy, quickly encountering one of central Phinda’s lion prides. A zebra has been killed in the night and the pride – three cubs, two adolescent females, and two adult females – hunker down as they feed, their chins stained red, their eyes always alert. It’s a raw but fascinating scene; the circle of life in all its untamed splendor.

Bumping our way along undulating tracks of crimson red soil, we spy a coalition of infinitely graceful cheetah lounging beneath a clutch of Tamboti trees, and disturb a solitary black rhino, who grazes, almost hidden, in a sea of new green shoots. Under the watchful gaze of a martial eagle, two young cheetahs clamber over the rocky terrain in a game of tag, taking turns to climb the boughs of low-slung trees before leaping into the honey-hued grass.

Since these elegant cats were reintroduced to the land in 1992, Phinda has earned itself a reputation for its cheetah communities. The cats were released into the reserve before lions were, in Africa’s first successful reintroduction of the two species, and now Phinda’s cheetah population is the fourth largest in South Africa.

Conservation programs like this are at the core of the Phinda Game Reserve. As we traverse the western edge of the reserve in search of two spectacular male lions, Andy tells us about andBeyond’s ongoing initiatives, which include research into the resident leopard population, which is presently stable at 30; contraceptive programs to help maintain a sustainable elephant herd; and the relocation of cheetah cubs to other parks to help foster new coalitions.

It’s been a mesmerizing few days exploring the ever-changing landscapes of Phinda but Andy has one last surprise for us. With the blanket of night settling across Africa we dismount from the Land Cruiser and descend into a corpse of wild fig trees. Here, the culinary team has set up an open-air kitchen, complete with a traditional braai barbeque, a candlelit cocktail bar, and tables lit with fairy lights. As the first stars emerge from indigo skies, we join other Phinda guests in toasting this remarkable corner of the earth and the efforts of andBeyond in preserving it for generations to come.

Experience a Horseback Safari at ol Donyo Lodge in Kenya