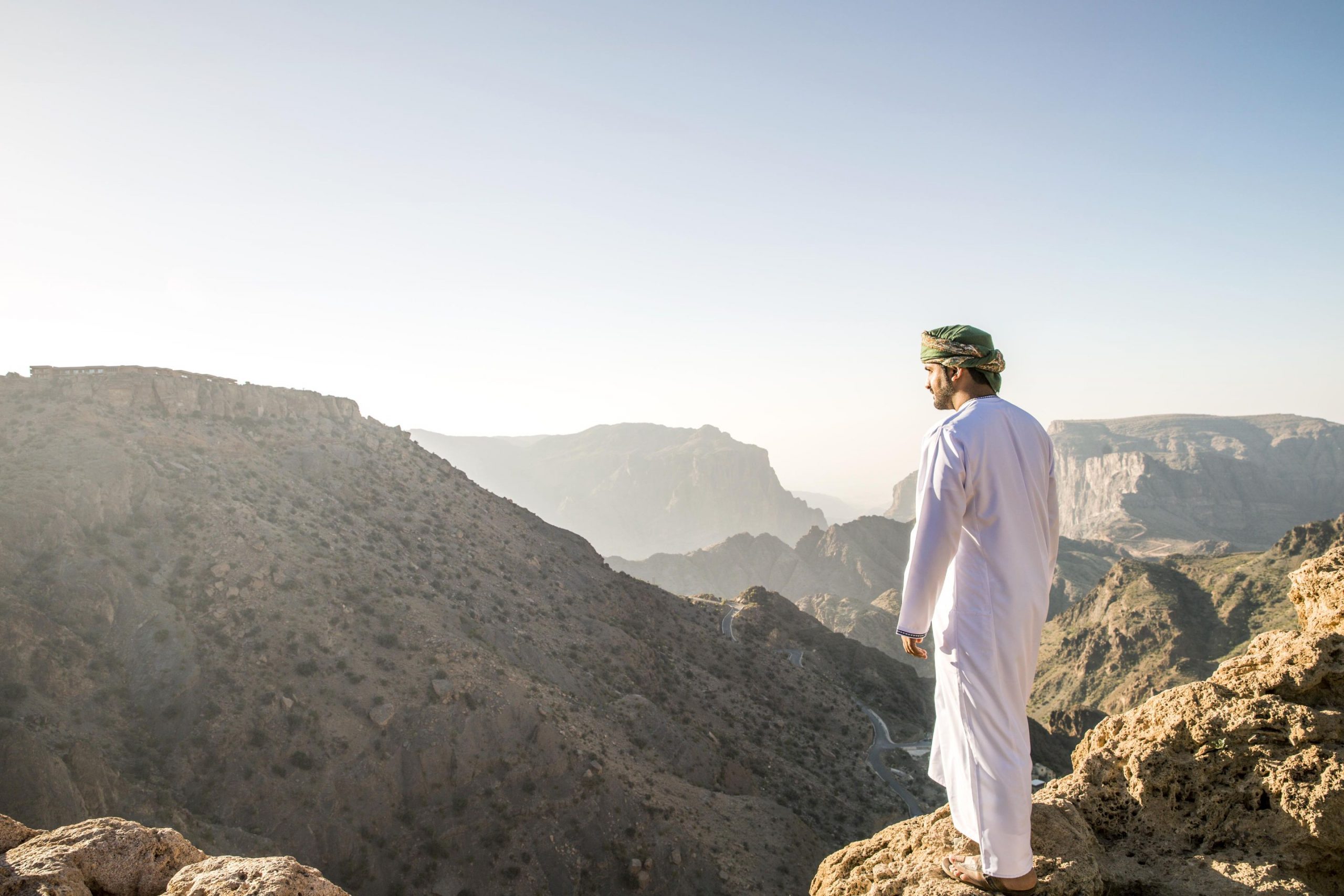 A visit to the two Anantara resorts of Oman and their striking surroundings is a chance to step back in time to the Arabia of old.

Night comes quickly in the mountains of Oman, as if a great blanket has been thrown over the world. The canyons of Arabia’s highest mountain range descend into deep purples as the sun sinks, and then, once that celestial orb passes beyond the highest peak, a darkness swallows up the landscape, punctuated only by a canopy of stars and a halo of yellow light cast from distant Muscat.

I’m watching this dramatic transition from a glass viewing platform at the Anantara Al Jabal Al Akhdar Resort, a luxurious retreat perched high atop Oman’s fabled Green Mountain. The platform juts out above a dizzyingly deep rift in the 6,500ft high Saiq Plateau, the ancient rock walls of the canyon plummeting down to villages of whitewashed stucco homes and date plantations. Nearby, guests do laps of the resort’s infinity pool while waiters prepare a private dining experience at the spot where the late Princess of Wales once found respite during a 1986 visit to the Sultanate. The light isn’t the only thing that drains away rapidly. The temperature plummets with the sun’s departure and guests are quick to wrap themselves in shawls so as not to miss a moment of dreamy twilight. 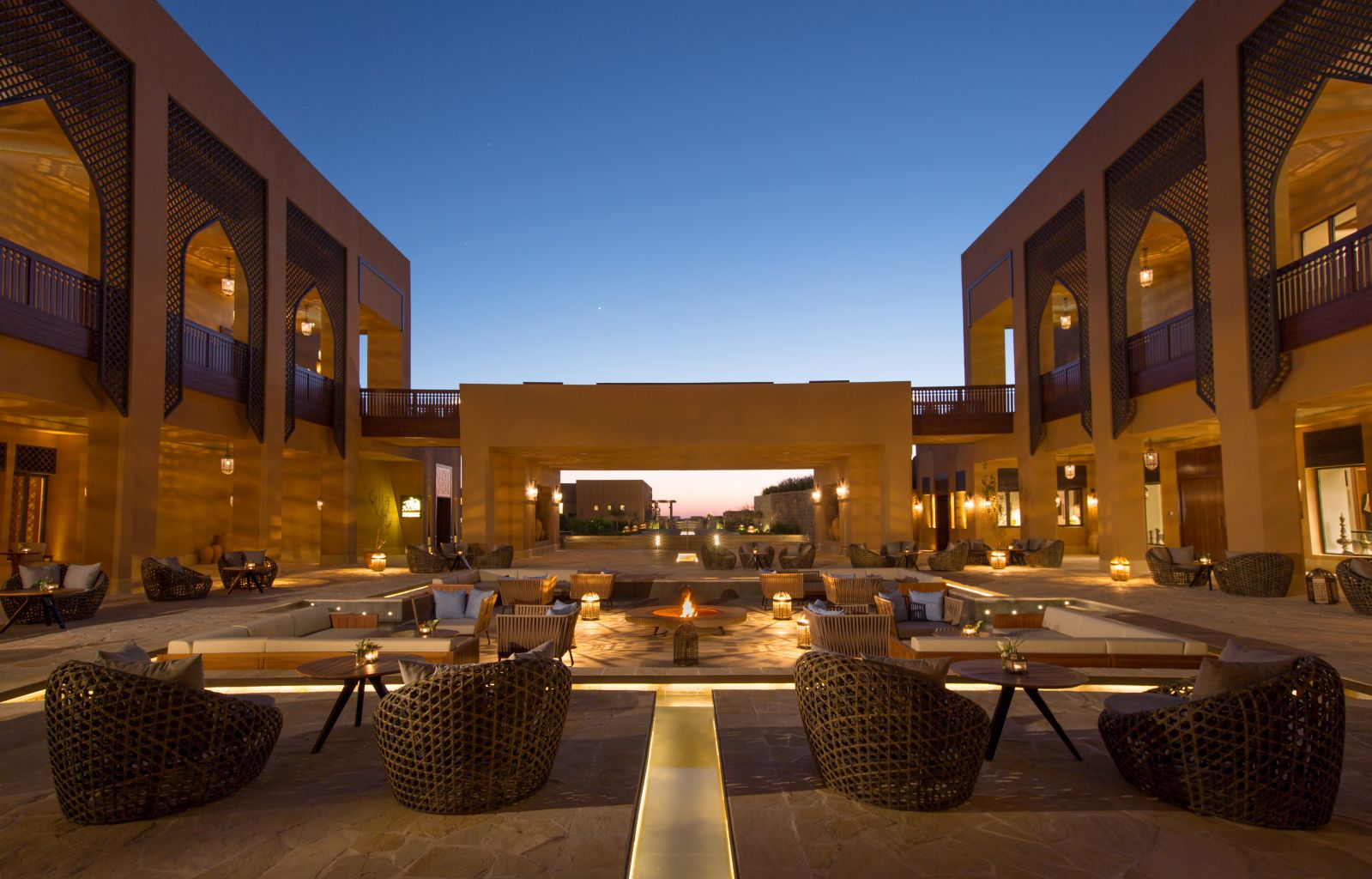 If Oman isn’t already high on your bucket list of destinations, then it really should be. Peaceful, modern, and sophisticated, Oman has maintained the balance between modernity and antiquity that has escaped so many other Gulf destinations. Beyond Muscat, the modern capital, little has changed since the Green Mountain range was ruled over by tribal dynasties, its surrounding valleys the verdant fruit bowl of the southern Arabic Peninsula.

The drive from Muscat to Anantara Al Jabal Al Akhdar takes just over two hours, much of it spent winding and climbing through breathtaking red and brown canyons with wickedly shaped tips that resemble trickle that’s suddenly cooled. Clouds stumble across the summits, while below, the barren cliff faces tell the geological story of the region in bold stripes and streaks of color. The whole range was under the sea before being heaved and folded into shape by the powers of the earth, and the minerality of the rock has made the valleys below surprisingly fertile, giving birth to the date plantations and fruit orchards that ring the nearby city of Nizwa, which has drawn travelers since the fifth century. 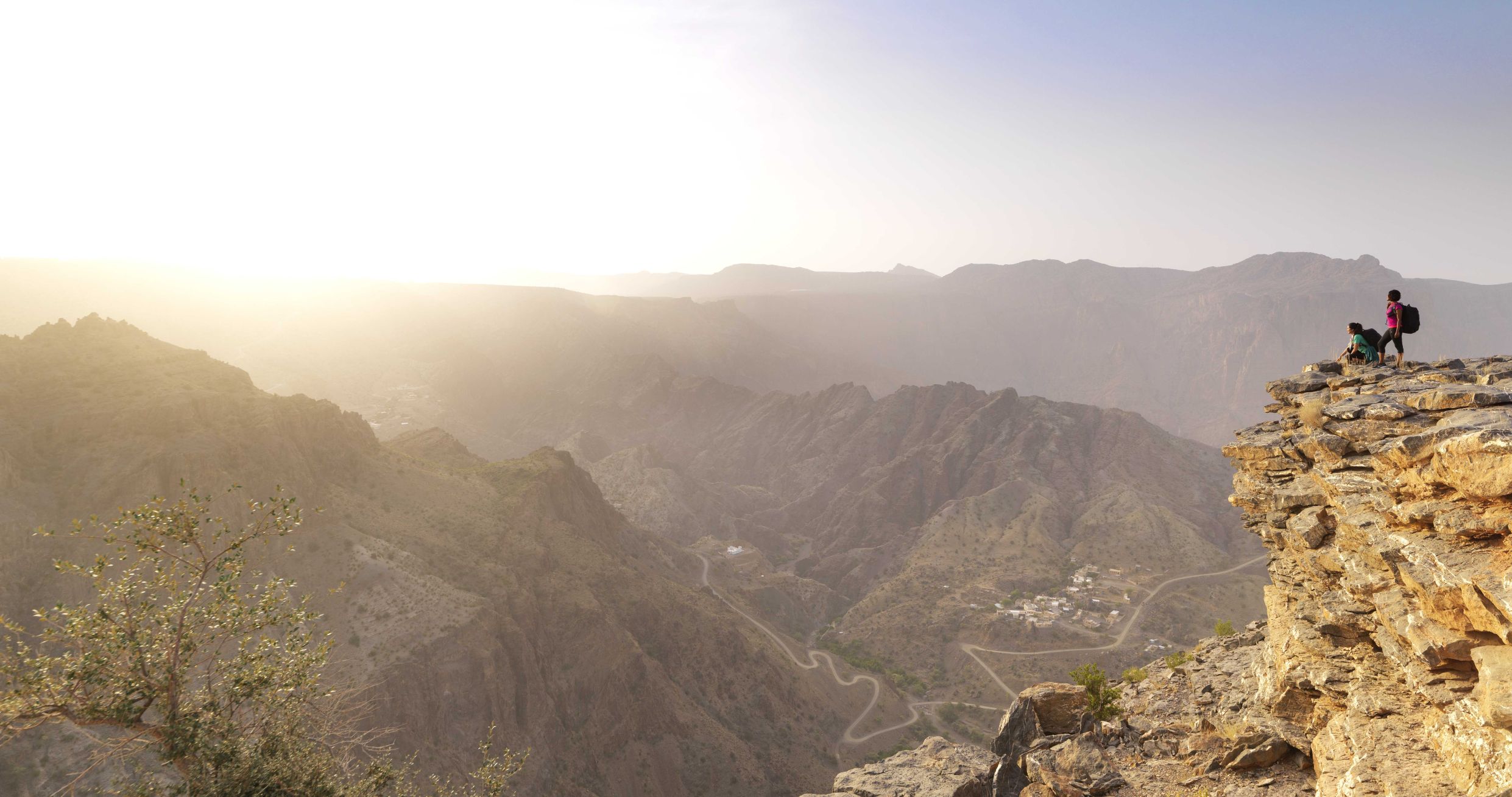 In keeping with the region’s rich heritage, the Anantara is less the lavish, glitzy resorts many associate with the Middle East and a more muted, refined retreat, its architecture taking its cues from the ancient fortress designs that once pockmarked these vital mountain ranges, a water feature running through the property’s manicured gardens a reference to the complex irrigation systems that sustained the terrace orchards of Al Jabal’s many villages.

Once checked into one of the Anantara’s 82 guest rooms and 33 villas, it’s easy to forget the world beyond even exists. My One Bedroom Cliff Pool Villa is perched steps from the canyon edge and features a spacious living room, a cavernous bathroom, and a temperature-controlled swimming pool. Standing on the patio on my first frosty morning, there’s no evidence of another soul on the mountain and apart from the odd amiable goat, I’m left alone to my thoughts. However, there’s much more to do on Oman’s Green Mountain than contemplating one’s own navel. 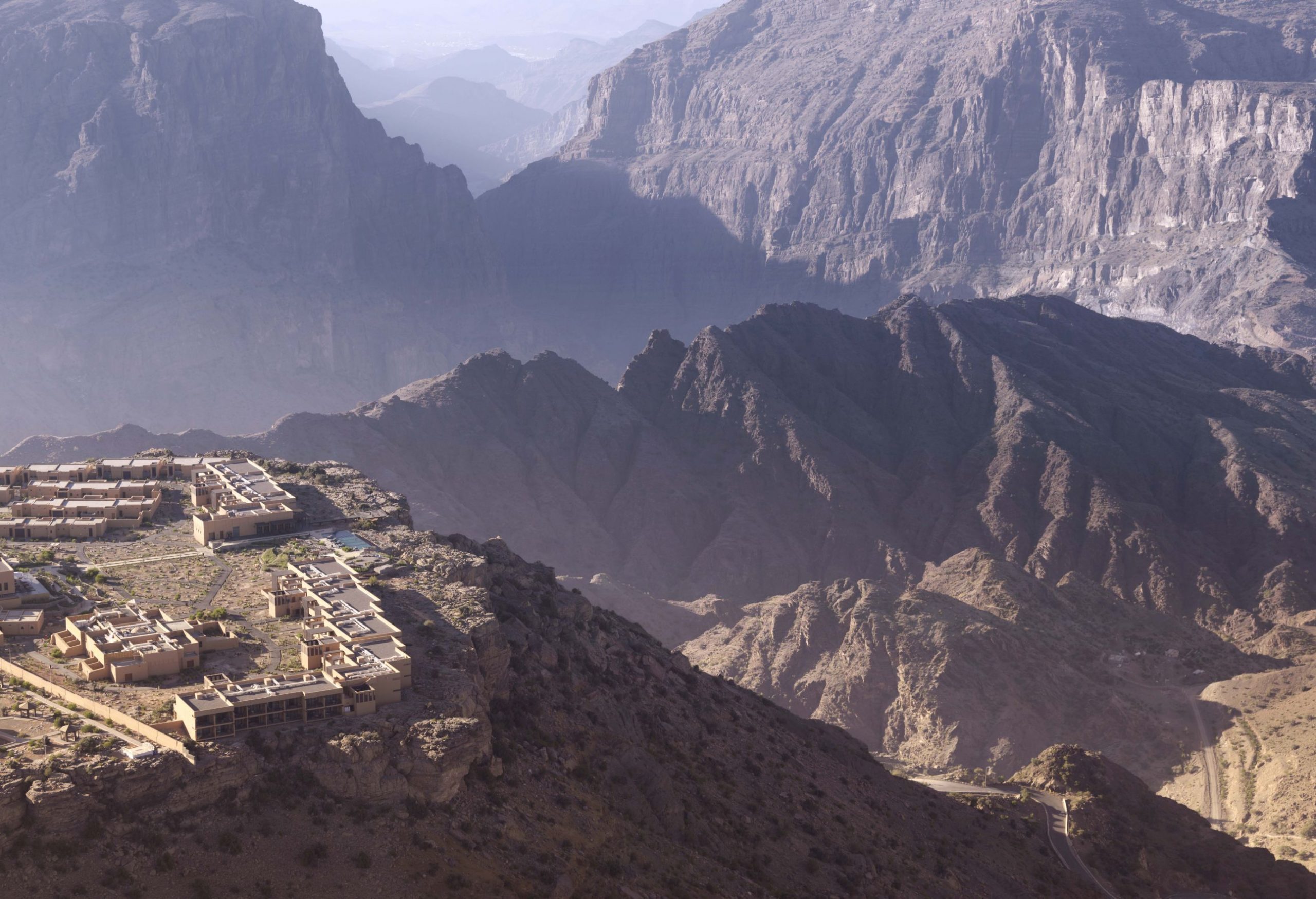 The newest addition to the roster of activities is the Jabal Activity Wall, where intrepid travelers can scale a raw slab of the mountainside using ropes, harnesses or Via Ferrata steep cables, all under the guise of a team of instructors. There’s also archery, mountain biking, and authentic Omani cooking classes to try, but to get a sense of the mountain as it once was I opt to join one of the resort’s cultural excursions.

I venture out with Maher al Riyami, the resort’s resident Mountain Guru, to visit the now deserted village of Birkat Al-Mouz, where he was born. The village, with its white blocklike homes and cascading terraces, is a short walk from the resort, down narrow mountain paths along which farmers would hike on their way to their pomegranate orchards. The natural spring that flowed through Birkat Al-Mouz’s traditional al falaj irrigation system eventually ran dry, forcing the villagers to resettle further up the mountain, but many still return to tend to their crops of garlic, walnuts, and roses, which come into bloom between March and May. Atop his childhood home, where he grew up with nine brothers and sisters, Mahar shares plump dates and points out the ruins of a 700-year old rose water distillery, its juniper beams now exposed to the brilliant sunshine. 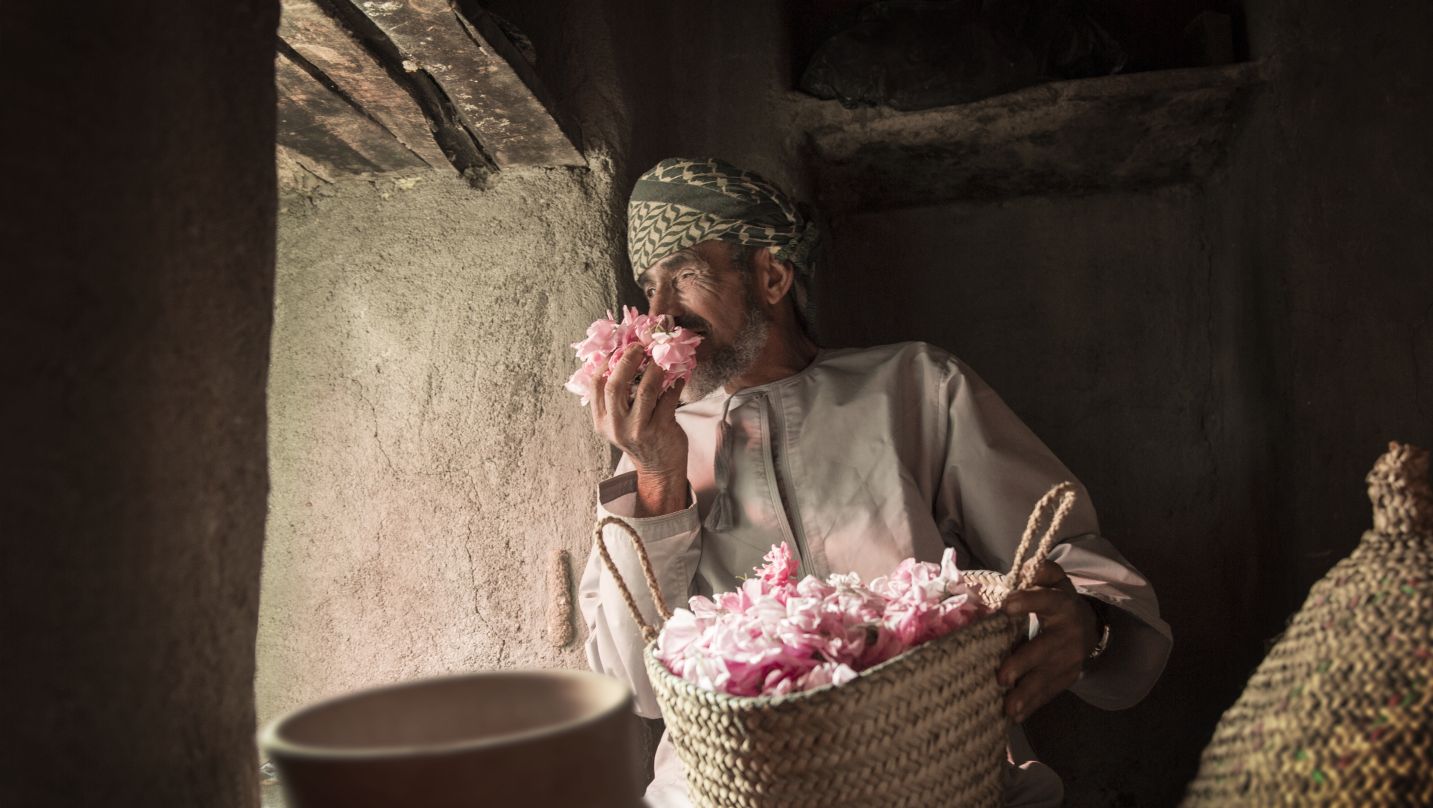 It’s these same vital ingredients – rose and pomegranate – grown in the valley, that are now employed in treatments at the Anantara Spa, where the rich traditions of Oman are maintained in modern wellness rituals. The Revitalising Pomegranate Journey, which uses fresh fruit from nearby orchards, blended with salt, is an indulgent exfoliation that’s followed with an Arabian massage and a milk and Oriental spice foot cleansing, making for the perfect farewell from one resort to the next.

After descending the Hajar Mountains once again, there’s time to explore Nizwa’s towering fort. From the top, the valley is a wedge of green date palms bordered by the pink stone of the towering mountains, and the cries from a nearby cricket pitch echo off the ancient stone.

From the interior, I journey south to Salalah, the capital of Oman’s Dhofar region and a popular destination with Middle Eastern travelers during the Khareef monsoon season, when the winds and rains of the Persian Gulf turn the plains into a lush Eden dotted with tropical fruit farms. I leave cruise ship tour groups jostling for their luggage at the new airport behind and head to Anantara’s breathtaking Al-Baleed Resort (below), a chic hideaway nestled between the splendor of a private beach and the serenity of a freshwater lagoon. Palms line the paths that lead from the main resort building to my one-bedroom Garden View Pool Villa, which has adopted the tall stucco walls of traditional Salalah architecture to create a sublimely private oasis. 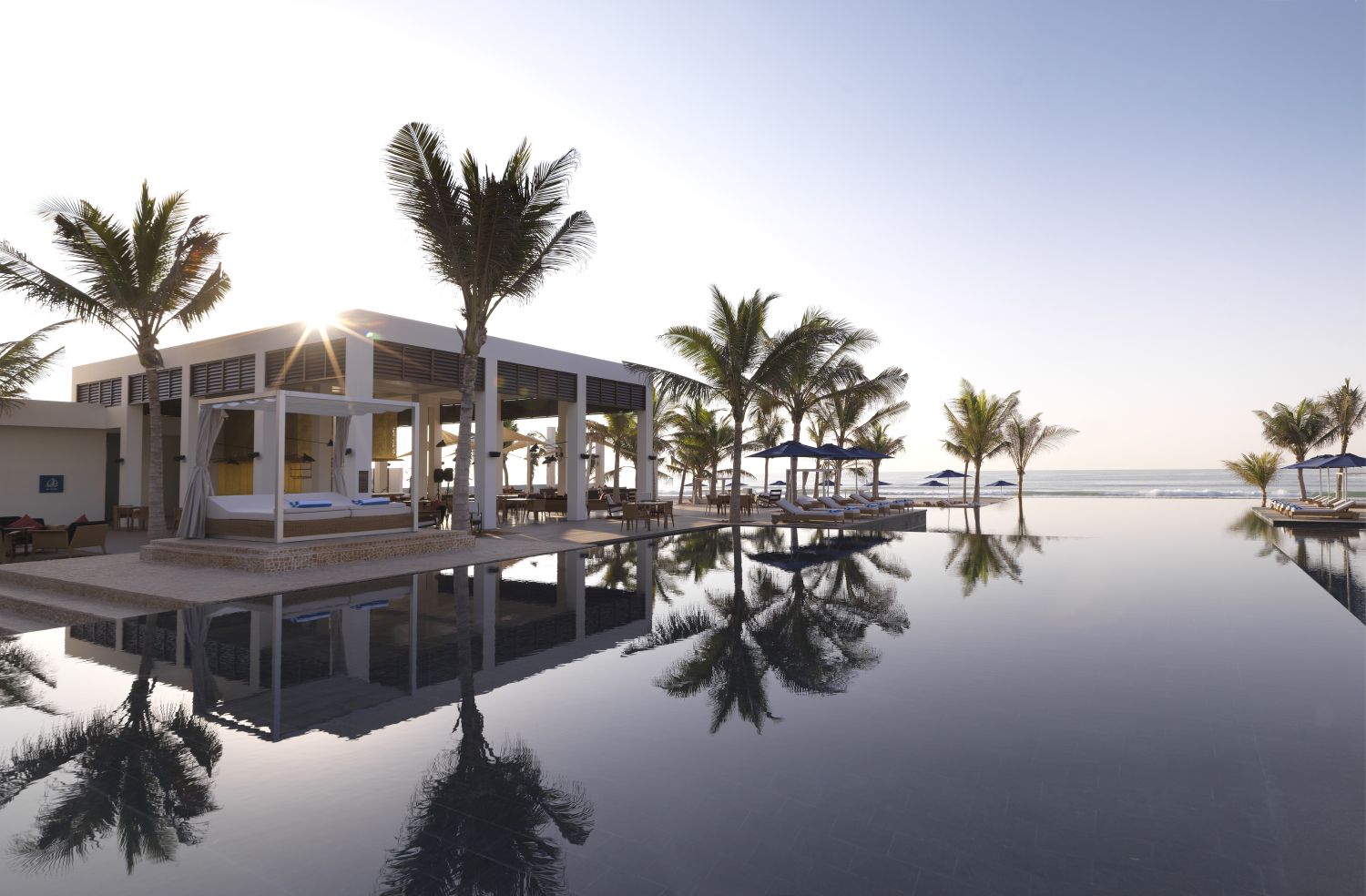 You may come to Salalah to work on your tan or to hike on Jabal Samhan Mountain, but what’s drawn visitors to Salalah since 3,000BC is frankincense. Also known as olibanum, the essential oil of this prized tree resin fueled Salalah’s ancient economy and remains an important commodity that’s thought to reduce pain and inflammation, boost the body’s immune system and potentially even fight cancer.

To learn more, I head out with Anantara Guru Hussain Balhaf, passing the Sultan of Oman’s sprawling palace as we journey west along a postcard-perfect coastline that’s deserted save for the odd somnolent camel. As we skirt the vivid blue waters of the Arabian Sea, Hussain tells me how Salalah has changed over the years.

“When I was a young man in the 1970s, you would not even see a car here in Salalah, only camels. Many things have changed, but then again, many things haven’t, and that is what’s beautiful about the south.”

Dhofar has long been a fishing and trading hub and on a rocky cliffside beside the sea the remains of Khor Rori, once an important city and defensive fortification, dominate the landscape. Established at the end of the first century, BC and said to have been the coastal palace of the Queen of Sheba, Khor Rori was used to control the trade of frankincense, but today the Unesco-listed ruins are little more than weathered stone where picnicking families enjoy stunning coastal views. 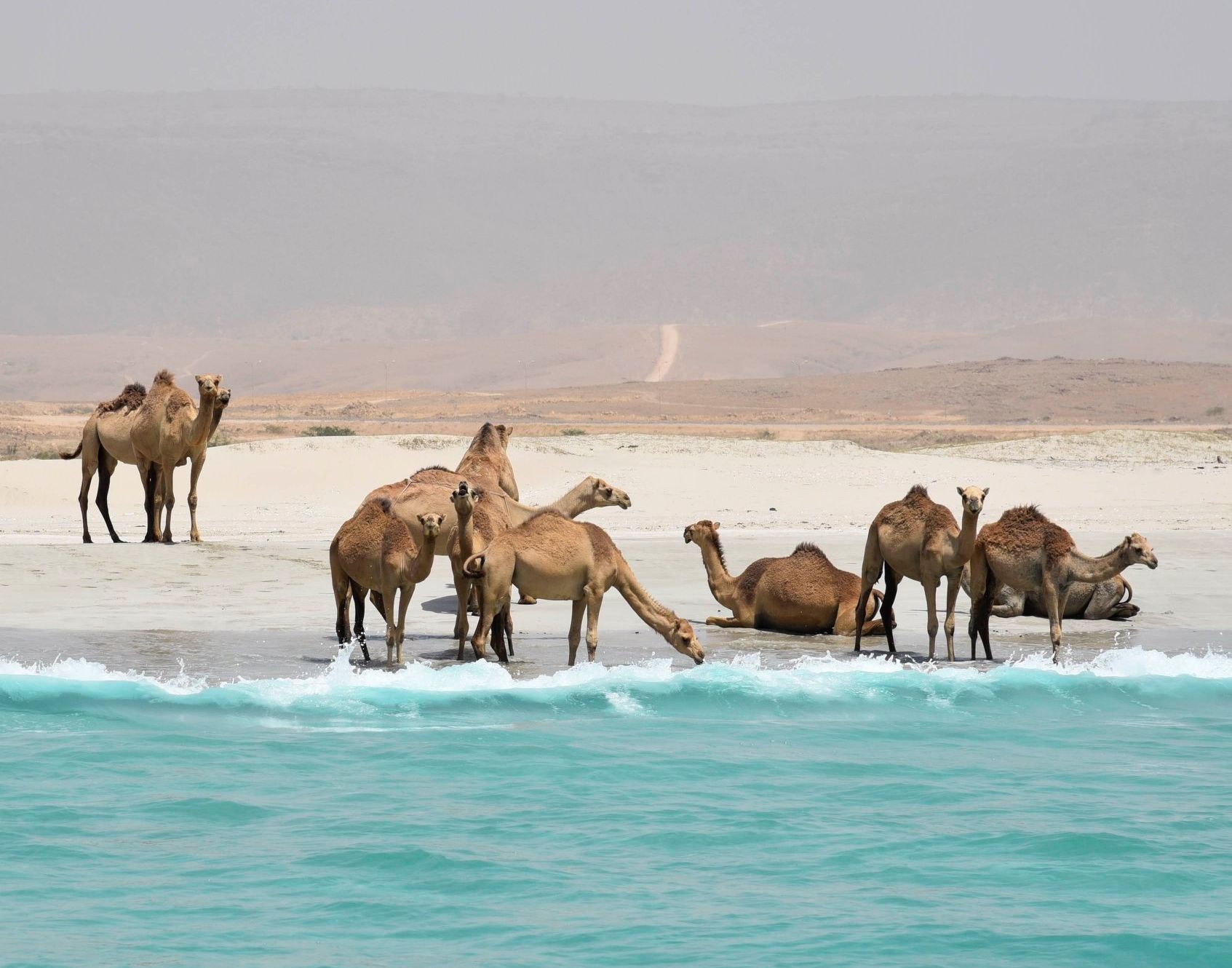 Climbing once again into the foothills, Hussain leads me into a steep wadi at the center of which wizened frankincense trees grow. Frankincense has had many uses over the centuries, from the ketoret ceremonies of the Temple of Jerusalem to a spiritual incense that’s regularly mentioned in the bible, including as one of the gifts given to the infant Jesus. Guests at the Anantara can visit Wadi Dawkah, a Unesco-listed site that’s home to over 5,000 frankincense trees, and have a local farmer show them how the precious honey-hued tree sap is collected.

To learn more, we continue on to Salalah’s Haffah Souq, the oldest in the city, which specializes in hawjari, the finest frankincense in the world, Here, the pebbles of resin are sorted for quality and color by women in jet black burkas in a scene that’s as timeless as the distant mountains, and the air is alive with the intoxicating aroma of burning sap. Despite its ancient heritage, frankincense is increasingly finding its way into modern products, from cosmetics to honey and ice cream, many of which are exported from Salalah. 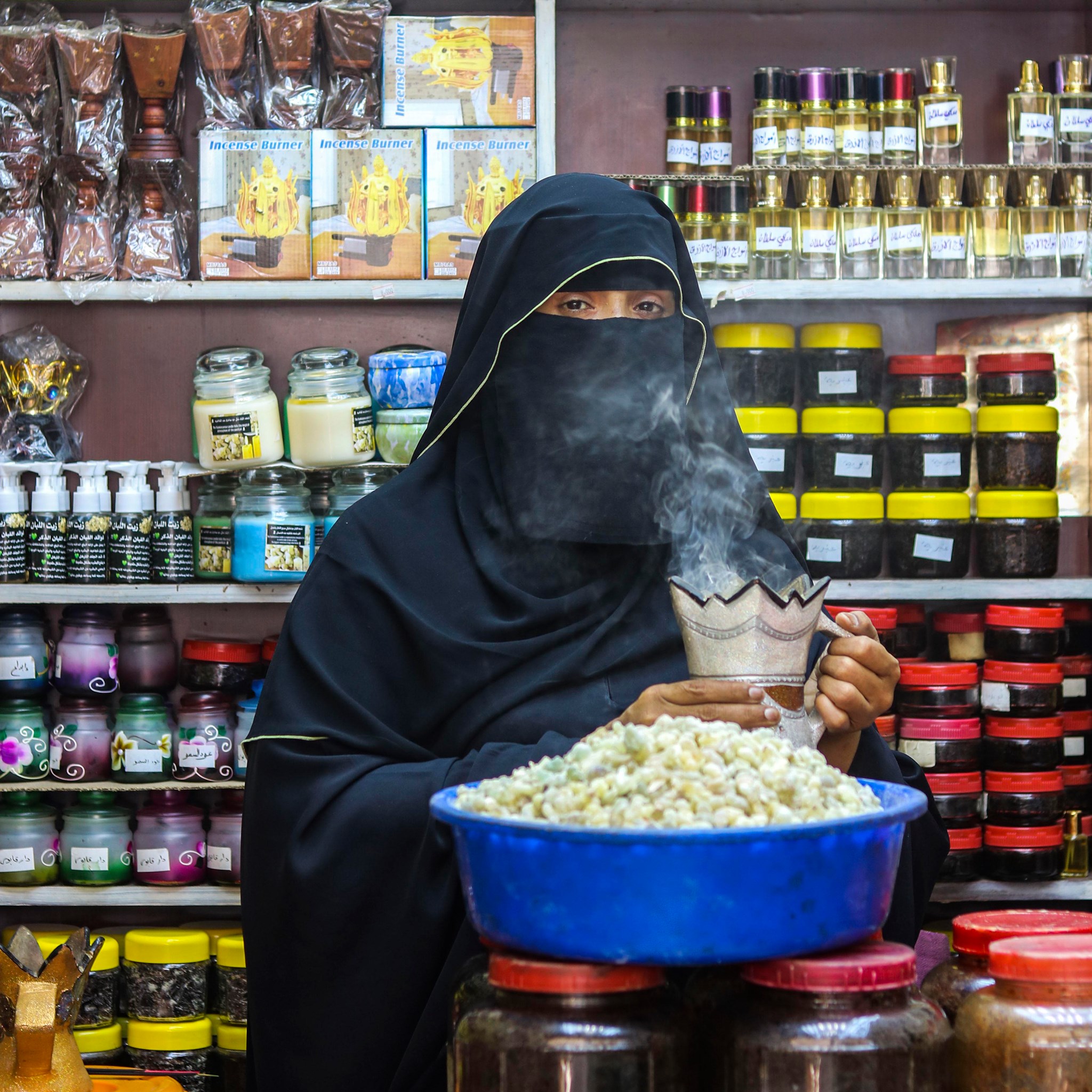 I decide to return to the resort and try something a little more traditional, with the 90-minute Frankincense Ritual at the Anantara Spa, which combines a sap-infused welcome drink with a fourhanded synchronized massage accompanied with warm, aromatic frankincense oil that’s said to promote circulation but instead sends me off to dreams of mountain fortresses, mythical queens and camel trains setting out for distant lands.