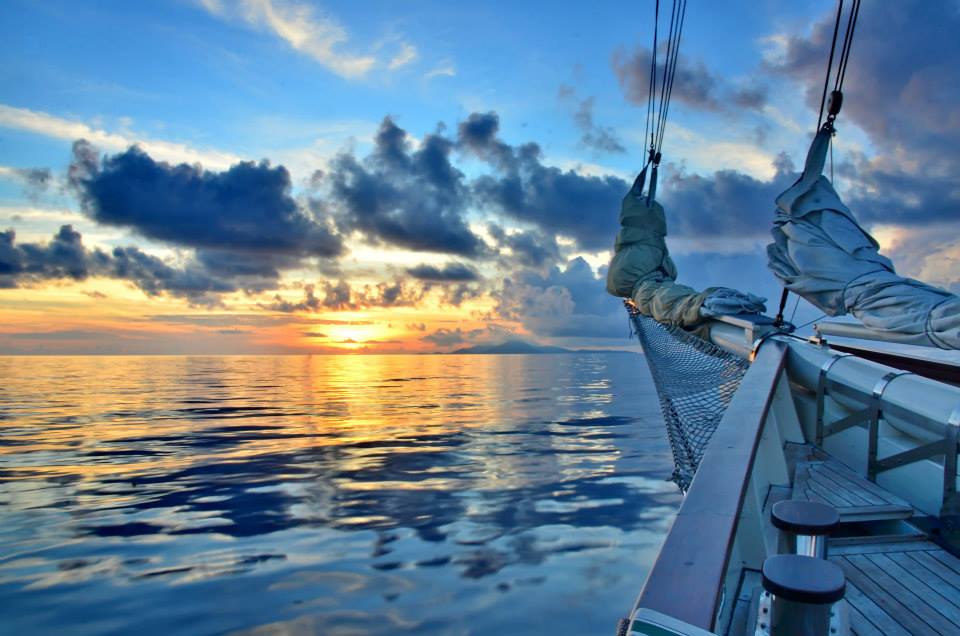 Nick Walton travels to the historic and exotic Banda Islands of Indonesia, once the epicentre of the world’s spice trade, aboard the majestic Mutiara Laut.

It’s just before dawn, a very reasonable time to wake for any sailing crew, and on the horizon the towering volcanic peak of Gunung Api, the Fire Mountain, emerges from the haze, silhouetted against the rising sun as a dark and defiant shadow. Above, the sky changes from the deep blues of night into the red and peach plumes of a spectacular sunrise, rays of golden sunshine penetrating a thick layer of morning mist crowning the peak. The seas below are mirror calm, treacle in their consistency, as pods of bottle-nosed dolphins arrive to guide our vessel, the 96ft schooner Mutiara Laut, towards the tiny port of Bandar Neira.

You’ll be forgiven for having never heard of the Banda chain, a tiny cluster of jade-hued peaks hidden away amongst the 17,000 islands of the Indonesian archipelago, but their history is one that reaches across the globe, into every history book, every museum, and every kitchen, for these are the historic Spice Islands, the origin of mace and nutmeg, spices once literally worth their weight in gold.

The islands’ tiny stature and their isolation belie the impact they once had on world trade; it was the Banda Islands that prompted Columbus to set sail on fateful journeys that ended with his discovery of the New World. Vasco da Gama rounded the Cape of Good Hope in their pursuit, while Ferinand Magellan launched his circumnavigation of the globe secretly in search of their coveted spices. 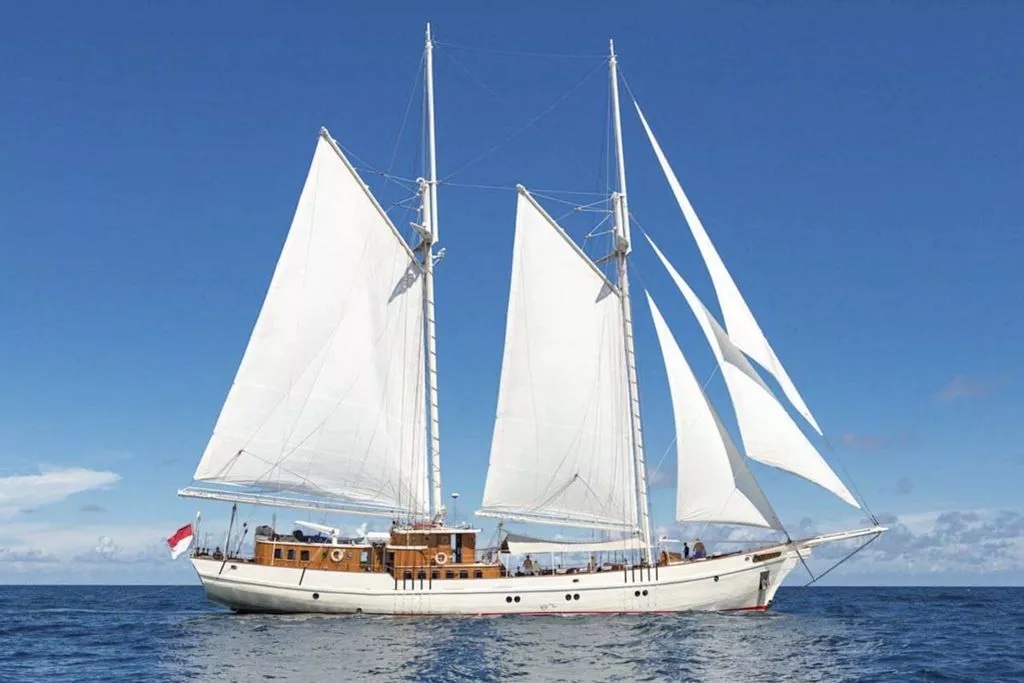 The Mutiara Laut is a fitting way to arrive at such a remote yet historic destination. Based on a 17th-century Dutch schooner, it is a picture of gleaming wood, towering masts and polished brass. Designed by former ship’s captain, yacht racer and Dutch naval architect the late Leo Oostenbrugge, the schooner was constructed of ironwood in Indonesia, where Leo had attempted retirement. Catering to a total of 14 guests in five beautifully-appointed cabins, the yacht now offers a luxurious way to cruise the many remote islands of the Indonesian archipelago, from Komodo, Bali and Flores to Ambon, Sulawesi and as far east as Papua’s stunning Raja Ampat.

We stand, steaming Sumatran coffee in hand, at the bow, enjoying the early morning sun on our faces, and watching as the Indonesian crew prepares for our arrival. Slipping between the volcano, lava fields running down its flanks like wicked black scars, and the curling hook of the main island of Banda Neira, the turrets of an ancient fort become visible on a hill above the sleepy port. Although both the Portuguese and English laid claim to these vital islands at different times – the latter finally relinquishing the Banda Islands in exchange for the tiny Dutch settlement of Manhattan (yes, that one) – it was the Hollanders who had the most influence, and left the heaviest mark, on these idyllic isles.

We make our way to the port, the only real settlement in the chain, in the ship’s zodiac, clambering onto a crumbling pier beside a once grand hotel, its colonial architecture and pastel façade now faded and cracked in the early morning heat. A dive operator, making the most of the region’s spectacular dive sites, now occupies the dusty lobby. There is talk of restoration, of golden years to come, but no one is holding their breath. Despite their vital role in history, the Banda Islands remain among the most secluded of the world’s faraway places, and foreign visitor numbers are low. 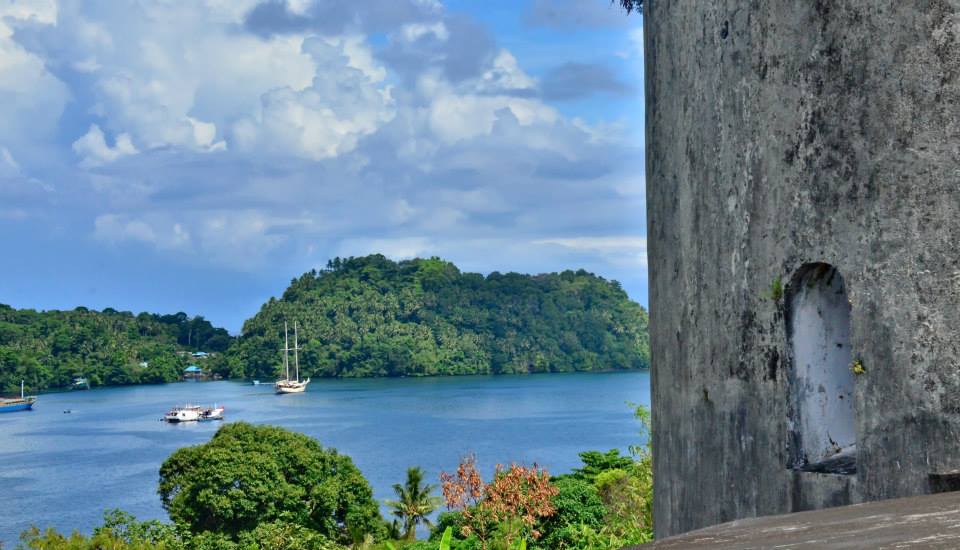 The first thing you notice walking through Banda Neira is how distinctly European the town looks, despite its crowing chickens, gleaming white mosque and bustling street markets. Colonial-era homes in turquoise and pink and baby blue line the narrow lanes that run from the water’s edge towards the fort; some are now guest houses, their interior courtyards filled with overgrown gardens, goldfish ponds and complacent cats. Another painted cream with blue accents has become a museum, where ancient cannonballs, muskets and jewellery boxes lie under glass and the often brutal history of the colonial era is remembered in brightly coloured tapestries on the wall. The museum’s pint-sized curator holds up a handful of coins dating from when Holland’s brutal Vereenigde Oostindische Compagnie (VOC), also known as the Dutch East Indies Company, assumed power over the Spice Islands. They gleam in the morning sun streaming in through louvred windows despite being more than 400 years old.

The Bandanese were no strangers to foreigners when the Dutch arrived in the 1500s. They had traded cinnamon, cloves, nutmeg and mace to Chinese and Arab traders for centuries, and later to the Spanish, British and Portuguese who travelled to the Banda Islands from their colony in Malacca. But island elders never allowed the Portuguese to build a fortification on Banda Neira, essentially making the islands easy picking for the more militant Dutch, who promptly built Fort Belgica in 1611 above the town, forcing the rival English forces to leave neighbouring islands and dominating the spice trade in the process.

At one end of town, where the stone road becomes a dusty track, a church stands white, proud and defiant, its off-white columns grandiose among the tin shed rice shacks and overgrown gardens. Within, between caramel-hued pews, its floor is pockmarked by the names of Dutch seamen, merchants and sailors past, the VOC insignia still clearly etched, as if tattooed, into the stone.

We walk away from the water again, passing tiny guest houses, each with shelves of history books and ships in glass bottles, laid regally beside snorkelling gear for rent and brochures for the region’s stellar diving. Beyond, complacent cats find corners of gardens out of the sun and dragonflies fuss between fist-sized tropical flowers. 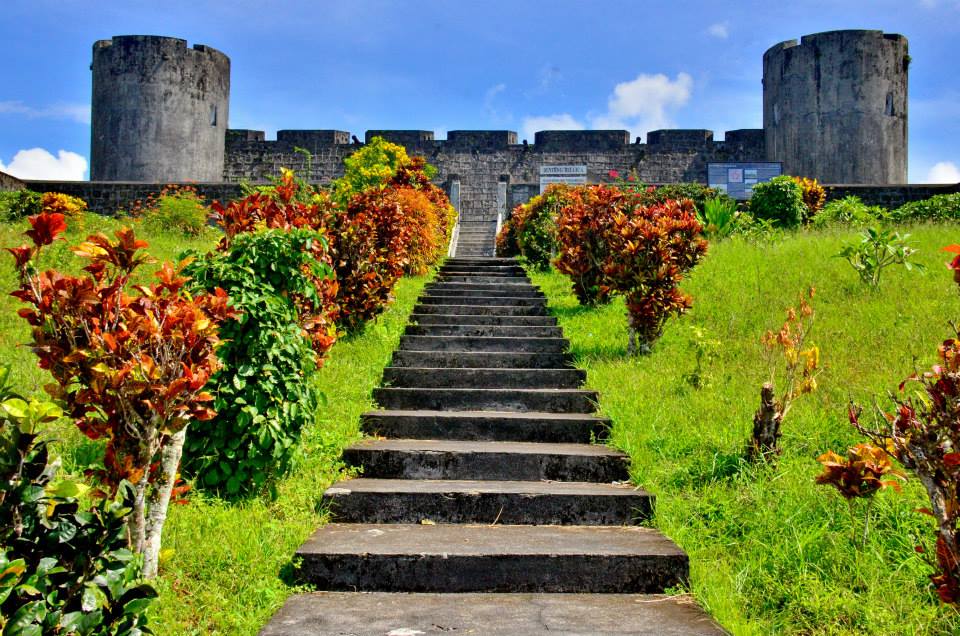 I’m watched as I ascend the stone stairs to Fort Belgica; the wet brown eyes of a caramel-coloured calf never leaving me as I walk up an honour guard of brilliantly red shrubs and shin-high emerald-hued grass. Even after all this time, the walls of the fort are formidable; built by the first Governor-General of the Dutch West Indies, as the Dutch promptly renamed the region, it was rebuilt in 1673 in its present pentagonal shape, with five tall circular towers keeping a watchful eye on the neighbouring islands.

I walk down a white-washed tunnel, my footsteps echoing off the ancient stone, and into the blazing sunlight of the central square, where 400 men were once barracked. There is little left of their presence; swallows roost in the shadows of armouries and bunk rooms but the view from atop the turrets down to the Mutiara Laut, which looks like a toy sailing ship dwarfed by the volcano, is inspiring. As I leave, entrepreneurial locals tempt me with their trade; VOC coins dug up from flower gardens or the fort’s weathered flanks, hefty canon balls the colour of root beer, and in plastic bags ready for the long trip home, cinnamon sticks, toffee-coloured nut meg pods and the bright red mace that once clung to them as so many powerful navies once clung to the tiny spice islands of Banda