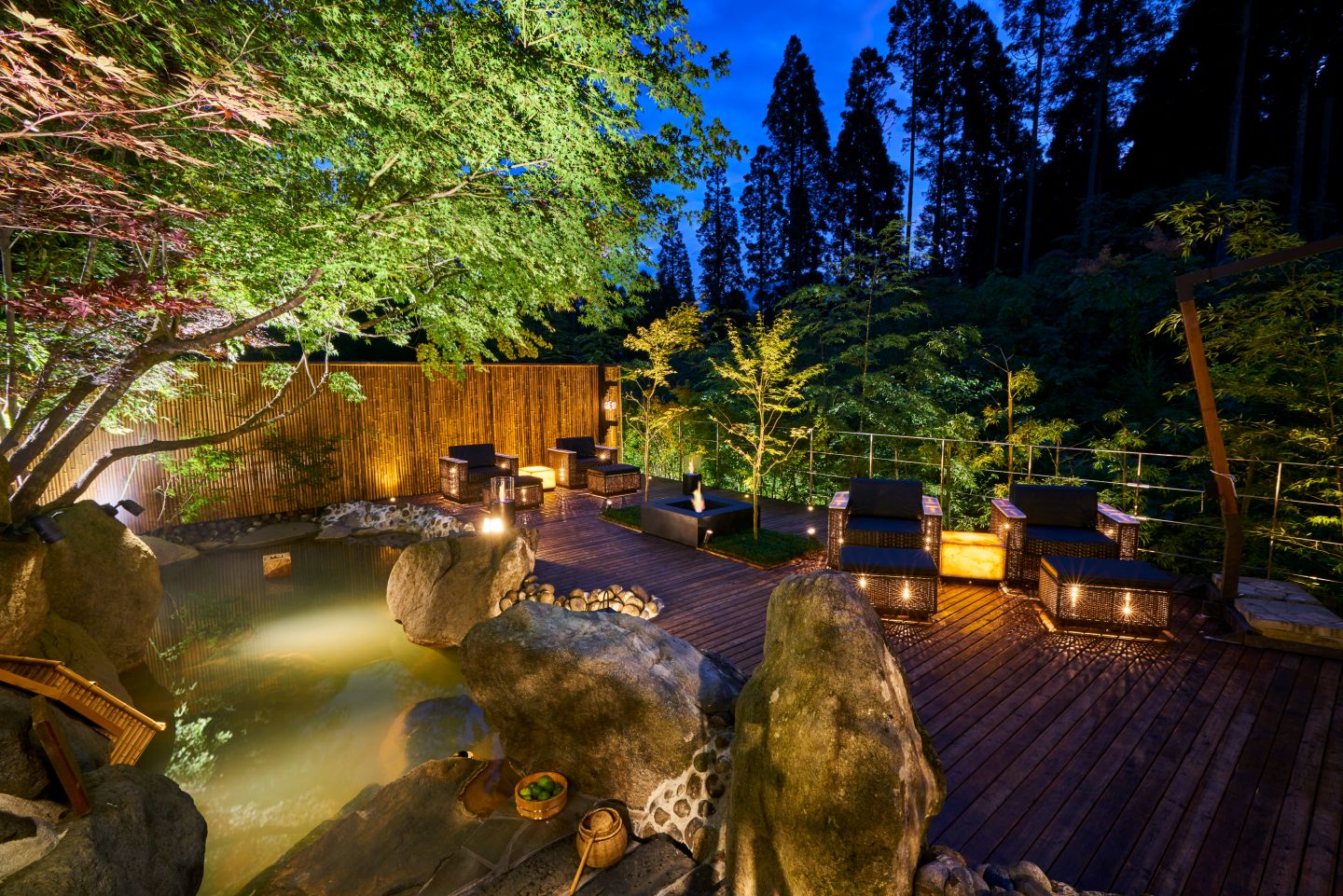 Step onto the sub-tropical island of Kyūshū, Japan’s third-largest, and you’re transported to another world. This is an island where geology makes the rules; its centre and south are dominated by huge active volcanoes, notably Mount Unzen, Mount Aso and Sakurajima. Such volcanic activity has not only produced iconic landscapes, but it’s also carved out a wonderland of some of the finest onsen (hot springs) in all of Japan.

To get to the core of the island’s onsen heritage head for the serene Onyado Chikurintei, a Japanese ryokan inn at Takeo Onsen, acclaimed as a spa destination for over 1,300 years. While some ryokan are modern and more hotel-like, Onyado Chikurintei is where you go to sample traditional Japanese hospitality, unchanged for centuries. 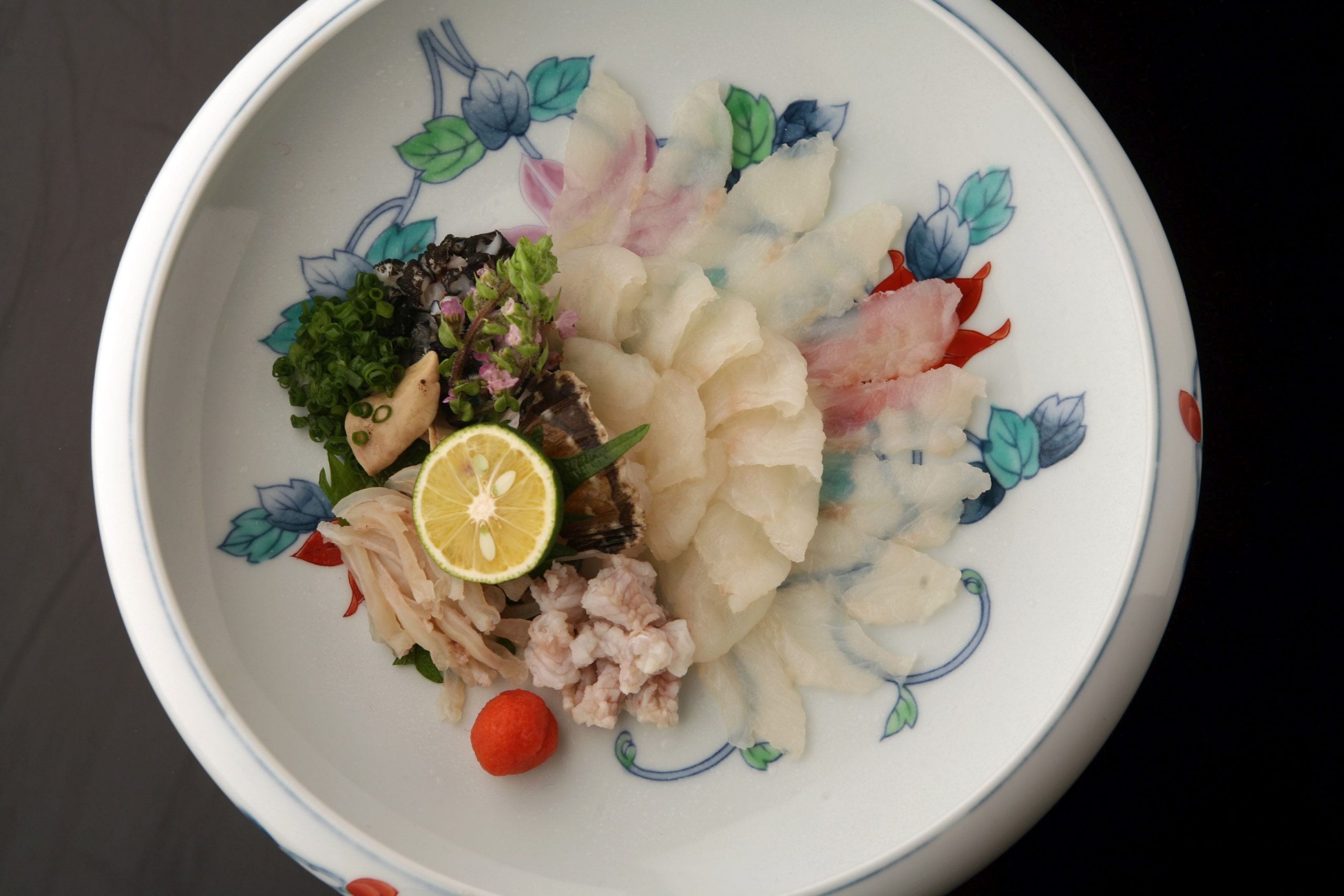 The inn’s 11 exclusive and unique rooms all boast scenic views over the property’s exquisite and extensive Mifuneyama Rakuen garden, with its large pond wreathing the base of Mt. Mifune. Onyado Chikurintei has a beautiful public bath hewed from hinoki cypress and granite, but for the ultimate indulgence, book one of the rooms with a private outdoor bath. Amid the aroma of delicate cedarwood incense, the Chikurin restaurant’s seasonal kaiseki meal – served in an ultra-traditional manner befitting your surroundings – can only be topped by post-dinner drinks by the lake, or on your very own a moon-viewing deck. It’s no wonder that the inn counts members of the Japanese royal family among its esteemed guests.

Rested and relaxed, your journey through Kyūshū continues in Nagasaki, a city most commonly remembered for the atomic bomb dropped here in 1945. However, this vibrant city is so much more than just that memory, as you’ll be instantly convinced after a ropeway trip up Mt Inasayama. The ‘$10 million views’ from its observation platform is said to rival even The Peak in Hong Kong. The Urakami River valley and narrow Nagasaki harbour are laid-out below, the city centre becoming a sea of flickering coloured lights as night falls. 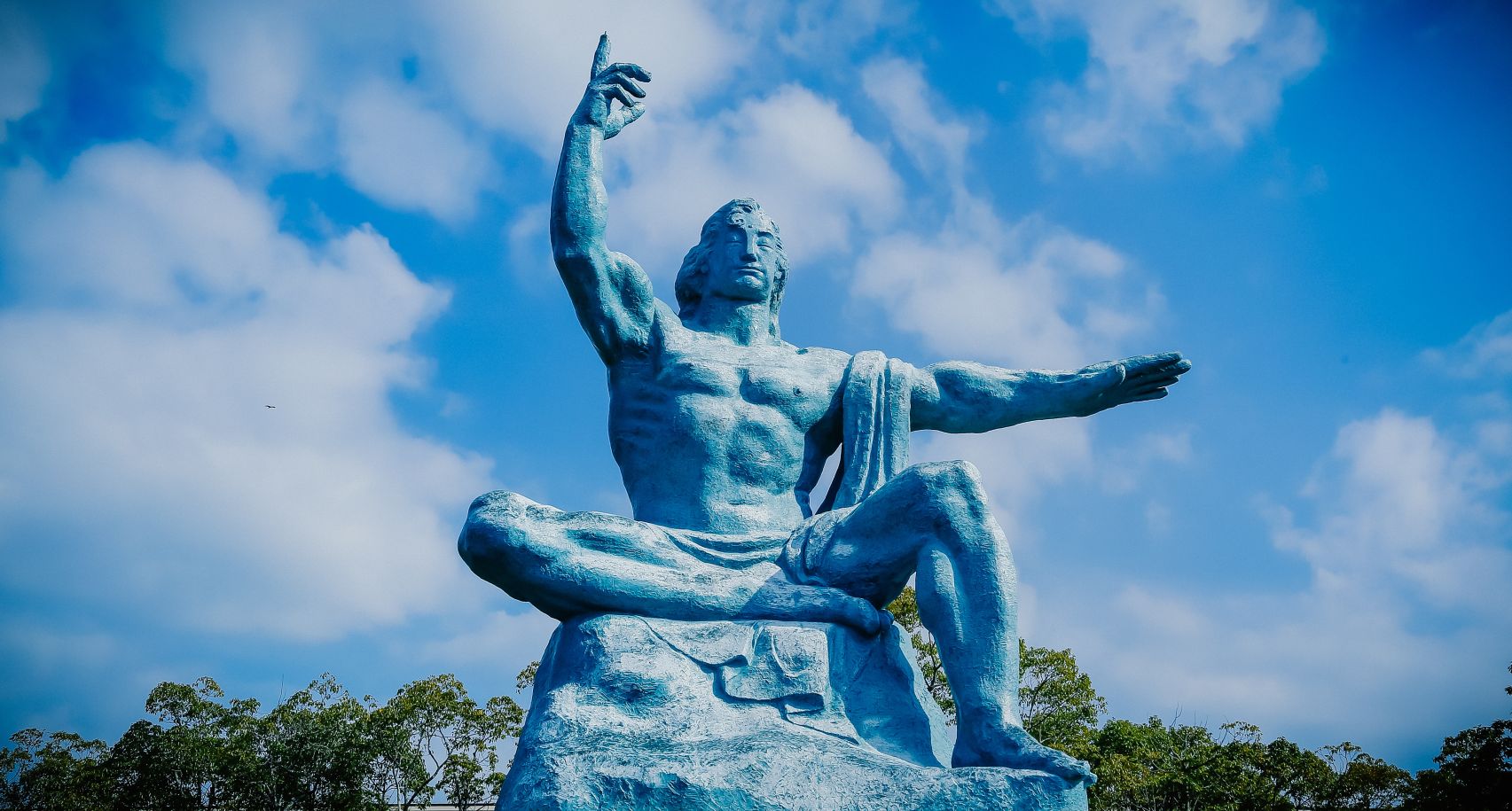 Nagasaki Peace Park and Ground Zero, on high ground in the city’s Urakami district, is built near the atomic bomb’s hypocentre. The right hand of the 9.7-metre-high Peace Statue points to the sky, and its eyes are closed in prayer. It’s quiet and evocative; garlands of origami paper cranes decorate the site, while more can be found in the nearby Bomb Museum, symbolising a young girl’s fight with leukaemia a full decade after the blast.

A short trip east is Kumamoto and its wonderful castle, but on the way don’t miss the sprawling, steaming and bubbling hot spring fields of Unzen Onsen, a resort town located in Japan’s oldest national park. Here you can experience another timeless soak at Takefue, an onsen ryokan with a unique take on the genre.

Just 12 rooms nestle in a bamboo forest, each different, but equally exquisite. Some rooms have private baths complementing three public baths, one beside a waterfall, another in a cave, and a third alongside a lush bamboo grove. Guests can take a massage in their rooms, or in the Zen Spa, while the seasonal dishes that form the local Kumamoto cuisine – both for dinner and breakfast – are served in the confines of guest rooms. 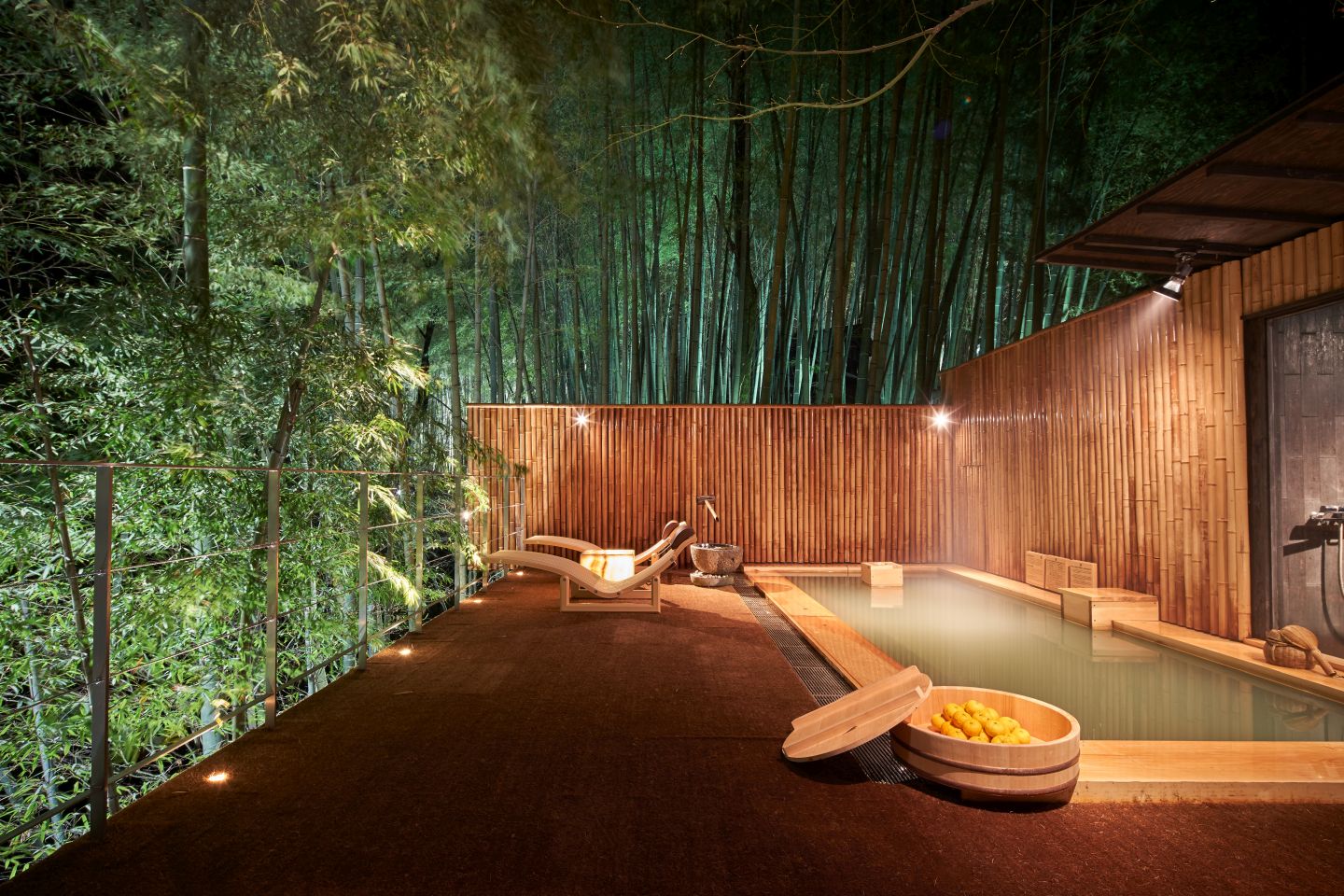 Though fastidiously Japanese, there are some nods to modernity at Takefue that foreign visitors might find enhances their ryokan experience. Unlike in most onsen inns, here, all rooms have coffee machines, filtered water, and WiFi, while wine is available, and a Western breakfast is optional. Room attendants all speak English.

If you can tear yourself away from these delectable onsen ryokans, Kyūshū has much more to offer. Nearby is the huge Mount Aso active volcano, whose crater can be visited by ropeway. Take a walk across the dramatic Kokonoe ‘Yume’ Ootsuribashi suspension footbridge in the Oita wilderness, then visit the Takachiho Shrine, followed by a rowboat trip down Takachiho Gorge. After a visit to the city of Kagoshima, including its fascinating Chiran samurai district, and the ominous-looking Mount Sakurajima volcano that looms over the city, consider a side-trip to the offshore island of Yakushima. 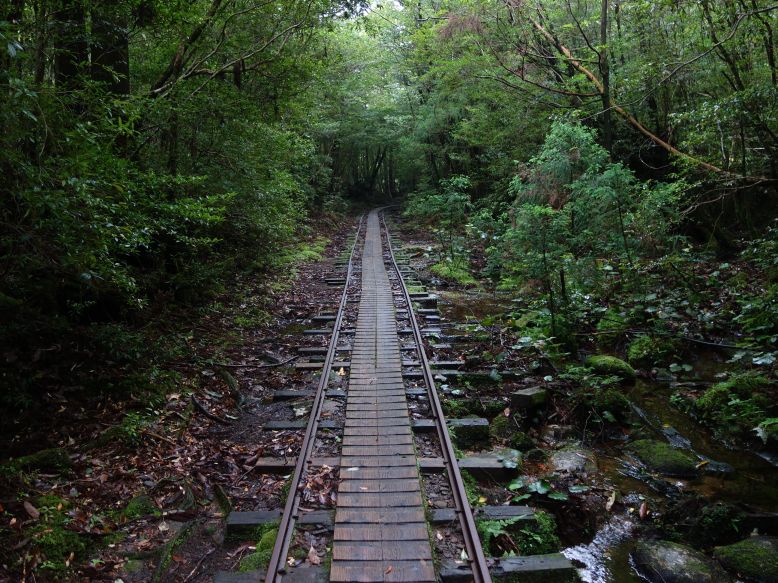 The entire island is a UNESCO World Heritage Site revered for its ancient yakusugi cedar forests. Here reside macaques and deer, while loggerhead turtles return to Yakushima’s beaches in summer to lay their eggs. With excellent hiking and many more hot springs, Yakushima is the ideal way to round-off a journey through Kyūshū, an intensely relaxing take on your next Japan sojourn. 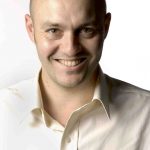 Jamie Carter is a freelance science, technology and travel journalist and author who writes for TechRadar.com, the South China Morning Post, BBC Sky at Night and Travel + Leisure.

Aman Set to Open in Manhattan