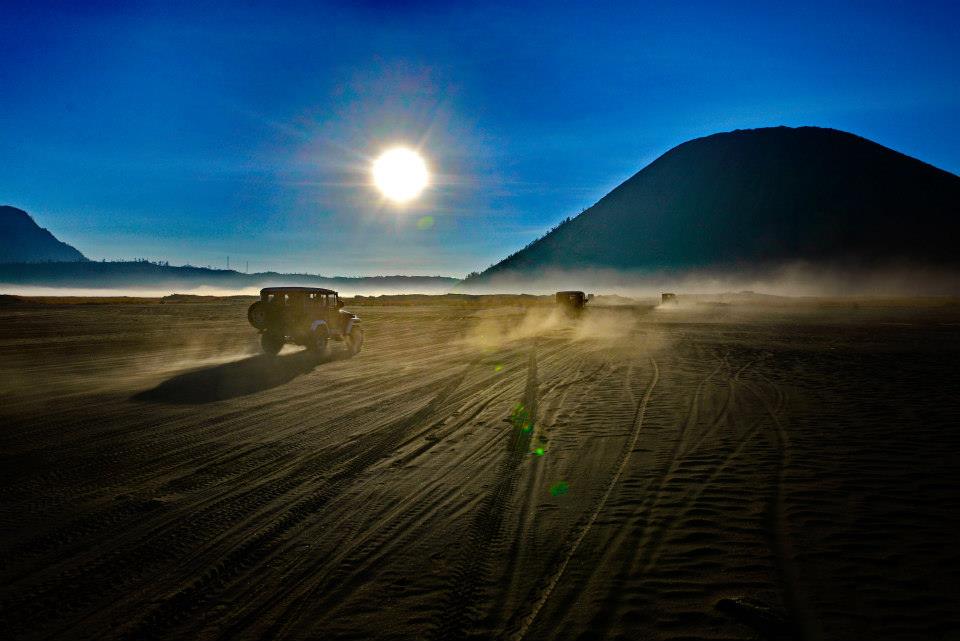 It’s one thing to drink organic, single-origin tea from some far-off exotic land. But it’s another to drink the brew of freshly-plucked leaves only feet from the plantation in which they grew. But this is one of the little perks of exploring the volcanic peaks of central Java on a truly unique motorbike adventure.

We’ve stopped for a cuppa on the long road up the steep flanks of Mt Lawu, one of three volcanic peaks that our seven-day, five-night itinerary includes. The climb has been refreshing after the busy highways that connect Java’s chaotic cities far below.

The air up in the highlands is fresh and clear, the view across the fertile tea plantations a mesmerizing patchwork of greens and earthy browns, the hills undulating like a rippling quilt. The tea shack is perched on the edge of paradise.

Our little group of five met in the university town of Yogyakarta two days earlier, after arriving from both sides of the Pacific. For my friends Marco Cortesi, Ben Smith, Will Theirbach, and my father Rob Walton, it had been a while since they’d ridden a motorcycle, but the idea of exploring Java on two wheels was seduction enough to draw them all the way to autumn in Indonesia.

There was excitement and trepidation as we mounted our fleet of 200cc bikes and followed our ever-smiling, chain-smoking guide, Sugiat (another guide, Andy, drove a support vehicle with our luggage on board), out of the city towards our first stop, the Dieng Plateau. After an hour, the heavy city traffic gave way to narrow, winding mountain roads as we climbed through valley villages, abundant with fruit crops and rice terraces, towards the heavens.

The Dieng Plateau is the floor of a volcanic crater that sits some 2,000 meters above sea level. In fact, its name comes from Di Hyang, which means ‘Above the Gods,’ which seemed fitting as the road steepened and we climbed ever higher towards the clouds. At a viewpoint near the top of the peak, we paused to gauge our progress and gazed across terraced tobacco and tea plantations that tumble down the mountainside into Sumbing Valley, the summit above lost in cloud cover.

It’s easy to see why this volcanic plateau, wreathed by cloud-covered peaks and bubbling sulfur-infused lakes, was once considered religiously auspicious. Of the more than 400 Hindu temples that thrived here between the 7th and 8th centuries, only eight are left, but those that remain have been beautifully preserved. After a lunch of fried chicken and freshly ground sambal at a tiny hole-in-the-wall restaurant, we explored the temple ruins, running our fingers across the ancient faces that stared out from the stone reliefs.

And then we lost our guide – or more correctly, our guide lost us. Sugiat, on his zippy little white motorbike, isn’t the most attentive guide in the world, and after our group was slowly split apart between trucks and buses on the narrow road down the mountain, we turned off the highway onto quieter roads for a chance to regroup. Sugiat, despite our calls and horn-tooting, rode off into the sunset, oblivious that he had lost his charges.

Of course, what do five foreigners in a strange land, without direction, do in such a situation? We decided to navigate our own way to Borobudur, which Sugiat had hinted was close by (throughout the trip, his estimates of the distance to our next destination would vary wildly, until it became an ongoing joke). With a little help from some sympathetic locals and a refreshed sense of adventure in the air, we set off in the direction of Borobudur and our hotel at its base.

However, night comes quickly in the mountains of central Java, and with it, disorientation; the roads are bumpy at the best of times and the traffic copious, but under the veil of night, it became even harder to stay the course and we were forced to pull over, make some calls, and finally direct Sugiat to us. It was a valuable early lesson that we needed to keep an eye on both each other and our guide.

It was an early start the next morning, a little after 4 am, when we rose to explore Borobudur by first light. We carried torches and cameras up the dark, tree-lined path from the little Hotel Borobudur at the Unesco-listed temple’s base, and climbed the steep steps towards the summit.

A 9th century Mahayana Buddhist temple in central Java, Borobudur had been an important place of pilgrimage during the reign of the Sailendra dynasty before being mysteriously abandoned and buried with volcanic ash, only to be ‘rediscovered’ and unearthed again in the early 1800s. The complex consists of six square platforms topped with three circular platforms, home to a total of 2,672 relief panels and 504 Buddha statues. The story goes that if you read the reliefs, in order, from the base to the top, you’ll reach Nirvana.

We did things in reverse, starting at the top as the sun cast the sky a dark indigo, followed by rose, and finally a ripe tangerine hue. There were more than 50 travelers watching the dawn, and the arrival of the sun was mesmerizing. Once the day had begun, we wound our way down, fascinated by the ancient faces that peered out from the stonework, as the sun sprinted into the sky and the temperature climbed.

We spent the afternoon at Yogjakarta’s expansive palace, before touring the 9th century Hindu Prambanan Temple in fetching sarongs, and then braving the heavy highway traffic to dusty and rather run-down Solo City. We’re back on the road again early the next morning, climbing up into the tea plantations in time for our fresh brew.

Our young brewmaster can’t stop staring and giggling; they don’t get many tourists up here, let alone five dusty and sunburnt motorcyclists, but she makes the strong tea for us in stout glass cups, the brew steaming in the shade of the simple bamboo shack. Below, we spy the conical hats of the tea pickers as they harvest leaves in a neighboring plot, and across the road, the dark silhouette of Lawu rises out of the morning haze.

It’s a long, steep climb up to the Ceto Temple, a 15th century Javanese Hindu shrine hidden away high on the flanks of Mt Lawu. With bikes straining in first gear, we climb the potholed road into the tiny village that wreaths the ancient temple, before climbing up the stairs to the gates. The view down across Java is spectacular and well worth the journey up the mountainside.

We slowly make our way down the mountain again, stopping in at a local restaurant for chicken roasted with wild bumblebee honey gathered by local farmers, before arriving at the impressive 81-meter high Tawangmangu Falls, where we pretend not to be intimidated by the wild monkeys that reign supreme at its base.

By dusk, we’ve crossed the plains and made good time up modern, quiet highways into another mountain range, to the border between Central Java and East Java. At a trucker’s coffee shack we take a break and sip thick, black Javanese coffee and watch clouds roll down the mountainside, a troop of crab-eating macaques calling to each other across the valley, a weathered Chinese gateway the only sign that we’re passing from one province to another.

Within an hour, we’re checked in at the beautifully maintained, 1950s Thunderbird-esque Sarangan Lake Hotel, sipping chilled Bintang beer on a terrace overlooking the water and waited on by two old gents in impeccable traditional Javanese suits and peaked caps.

After a day’s ride across a plateau dusted with fresh volcanic ash from Mt Kelud’s latest tantrum, we reach Mt Bromo, climbing to the rim of the Tengger massif before crossing the Sea of Sand, a vast, protected sea of volcanic ash that curls around the base of the active volcano, up to the band of small hotels that cater to Bromo-bound travelers.

At 2,329 meters Mt Bromo isn’t Java’s tallest active volcano, but it’s certainly its best known and most visited. It’s pitch dark and remarkably cool at 3.30 am the next morning when we mount up again, temporarily exchanging bikes for seats in a long convoy of boxy, short wheelbase Land Cruisers that wind their way through the night, around the crater’s edge, to a viewing point on the higher Mt Penanjakan in time for sunrise.

After a chilly wait, the sun finally kisses the volcano’s slope with golden light, casting its rocky ravines in shadow, a steady plume of smoke at its summit a warning that the peak is still very much active, having erupted last in 2012.

For five sometime riders, this has been a challenge that we’ve faced head-on; a test of resilience, rewarded with superb landscapes and welcoming people

Is This the Future of Luxury Cruising?