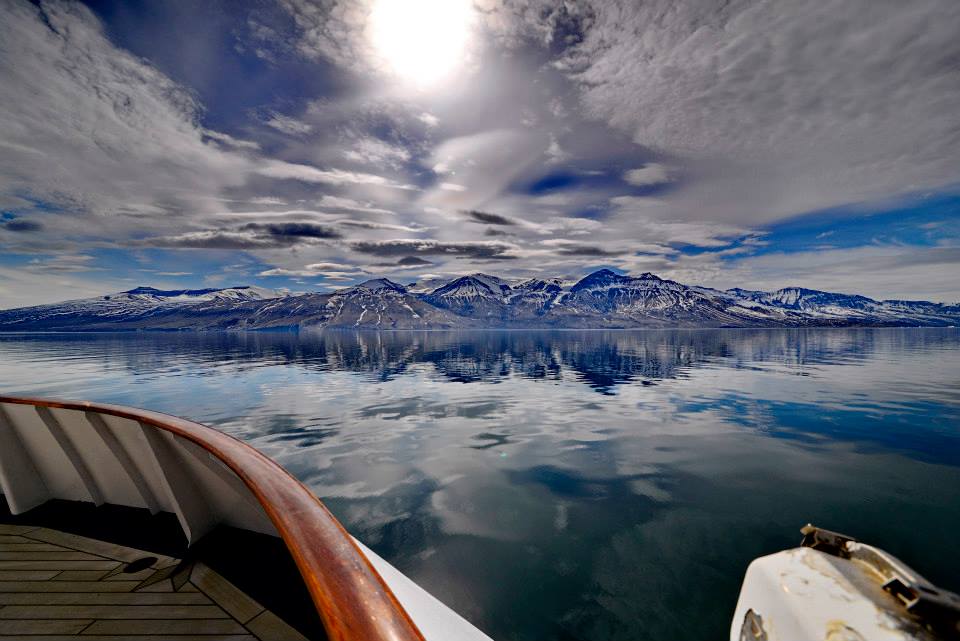 “Now that’s one view I never tired of,” says our Danish captain as the first wicked black peaks of Greenland come into sight far below. In a rare opportunity in post 9-11 aviation, I’ve been invited to the cockpit of our Atlantic Airways charter flight midway between Copenhagen and Kangerlussuaq on Greenland’s west coast, and arrive in time to see the ice floes that mark Greenland’s southeastern territory drift past, replaced by the three-kilometer thick icepack that cakes the vast interior. It’s an awe-inspiring view that has all 53 guests on the flight glued to the windows as we descend towards the former US airbase of Kangerlussuaq.

I’ve always wanted to explore Greenland. As a child gazing up at a world map pinned to my bedroom wall, I’d marvel at the vastness of Kalaallit Nunaat, as it’s known in Greenlandic, and would try to curl my tongue around place names like Kangilinnguit, Eqalugaarsuit, and Ittoqqortoormiit. Decades later and we touch down at tiny, dusty Kangerlussuaq, a WWII bomber town that’s home to Greenland’s largest airport. In the distance, the ice pack can be seen, defiant against the mid-20s temperature and the fleeting summer season, when an increasing number of adventure tourists make the journey to this far-off land.

At the end of the runway, packs of impatient Greenlandic sled dogs howl at a US Air Force transport as it lumbers into the sky. Behind fences for the summer, the wolf-like dogs pine for the great open spaces of their homeland and yap as our special offroad minibusses pass. After soaking in the view of the icepack from a nearby peak, we lunch on whale carpaccio, whale blubber sashimi, cured musk ox, and nips of fiery local cloudberry schnapps at Restaurant Roklubben, a local institution on the banks of mirror-like Lake Ferguson. With wildflowers blooming in the heather surrounding the pure lake waters, and a robin’s egg sky above, crisscrossed with trans-Atlantic contrails, it’s certainly not the icy desolation I was expecting.

We catch sight of the Sea Explorer, the daring little adventure cruise ship chartered by Greenland travel experts Albatross Travel, from high up on a bluff, the ship a tiny speck of blue dwarfed by high, ancient valley walls on either side (Greenland is a destination that regularly humbles travelers by its sheer scale). The Sea Explorer is the perfect vessel for navigating this unique landscape. With an ice-strengthened hull that comes in handy when shuffling through the ice at the base of glaciers and room for 114 passengers, Sea Explorer’s staterooms are spacious and elegantly appointed. Panoramic windows welcome the summer nights’ lingering twilight and timber accents and spacious ensuites make cabins more than comfortable. Homely touches can be found throughout the bar, lounge, library, and main dining room below, and are complemented by a well-trained international crew.

I greet the dawn early the next morning as we arrive at Sisimiut, our first port of call as we cruise north towards Disko Bay. The second-largest town in Greenland, Sisimiut is perched on steep hills overlooking a bustling harbor lined with vibrant red, blue, and green stilted homes, a stunted timber church from 1775 watching over the entrance to the port. A family, their youngest children enjoying the warmth of a summer morning, mends traditional kayaks at a harbourside workshop while a boutique nearby sells clothing made from qiviut, the soft inner wool of the musk ox. Closer to town, at an artisan’s workshop, whalebone is used to make traditional Greenlandic jewelry, and nearby, a local supermarket has specials on seal, whale, walrus, and musk ox meat, fresh from the hunt.

I spy my first icebergs the next morning. Rising at 5 am to glorious blue skies, I take in the stunning landscapes of Disko Island’s thousand-meter-high mountains in the distance as jagged chunks of ice, some the size of suburban homes, others the size of SUVs, drift past, brilliant in the intense sunshine. We anchor outside tiny Qeqertarsuaq, a town of 800, and make our way up towards the former whaling hamlet’s unusual eight-sided church, known locally as “Our Lord’s Inkwell”. Across the tiny settlement of brightly colored cottages perched on bare rock slopes, massive chunks of ice bob in the shallows, caught on the sand until the winter comes. 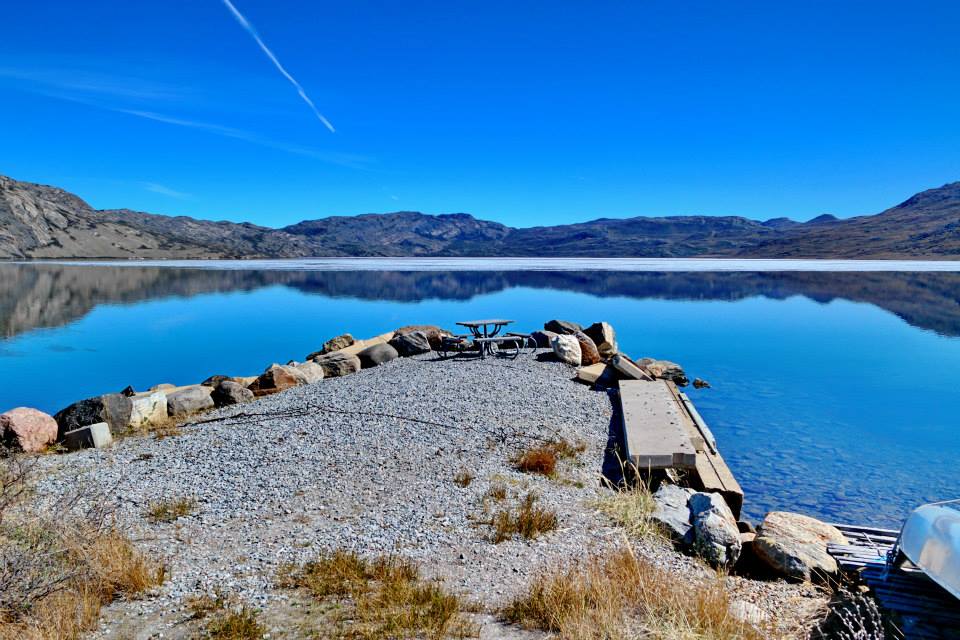 I follow a village elder named Akku to his home overlooking the harbor. Dressed in white fur with black boots and with a jolly face behind a tiny mustache, Akku shows me polar bear skulls from a hunt when he was a teenager, and his collection of traditional harpoons, before serenading our group with Greenlandic love songs.

“Tourism is all we have now that the young people have left,” sighs Akku as he absent-mindedly strums his guitar and sips from a steaming mug of coffee. “The winters are hard in this place but we still find beauty in all the seasons. Being this remote you have to.” He reminds me of a pint-sized Elvis with his guitar and soft, crooning voice, and the visit is nothing short of magical.

Like opening a set of Russian nesting dolls, we visit Niaqornat, a community of only 60 people, perched on the tip of a finger-like peninsula. The ship’s zodiacs crush their way up onto a beach of tangerine-sized stones worn smooth by the sea. In the distance, Greenlandic dogs on chains bark and wrestle beside an inlet lake that reflects the village’s vibrant homes in its chill waters. We walk down dirt paths and past stacks of faded sleds and drying seal pelts, beneath the village’s whale and fish drying racks, to a narrow beach, where elders have caught a seal. It’s my first time seeing a seal up close, and certainly my first time seeing one butchered as the men of the village skillfully dance knives between skin and meat.

Every part of the animal is used, the dogs howling in anticipation of their portion. Blood soaks the beach stones red but is quickly washed away by the sea. It’s an awakening for the passengers of the Sea Explorer but a part of the circle of life in many remote Greenlandic communities where traditional living continues untested. 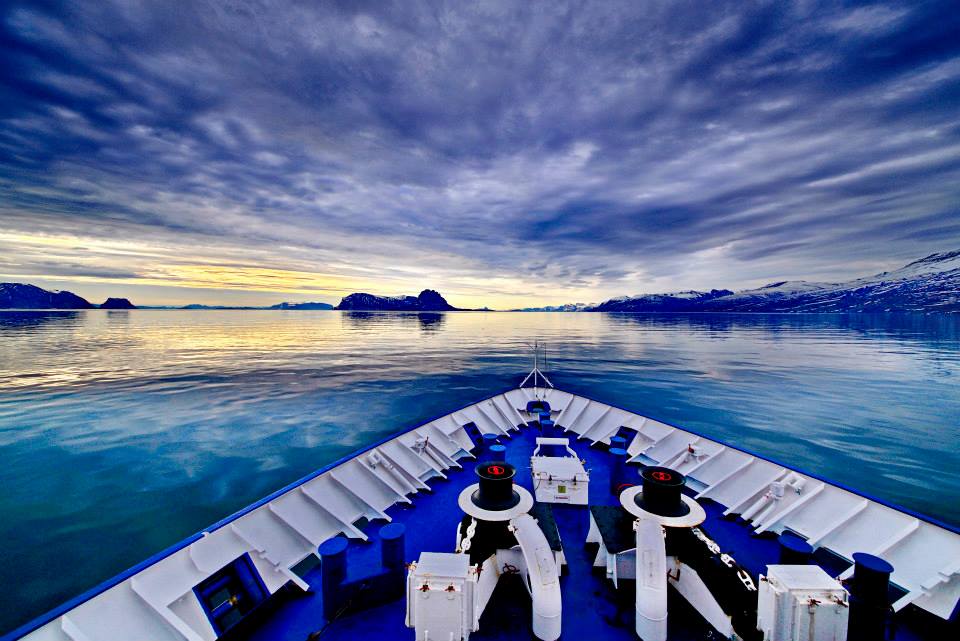 It’s late morning the next day as we nudge and grind our way towards the dramatic face of the Equip Sermia glacier in northwest Disko Bay. Throughout the morning, the presence of icebergs in our path has increased until the ship is forced to slow and maneuverer through a patchwork of blazing white and turquoise blue that reaches to the icy cliffs of the glacier in the distance. We travel as far as the captain dares before lunching on the outside deck surrounded by an expansive sea of pristine floes. In the afternoon we follow the bergs, some as large as the ship, south into the bay.

It’s almost midnight when the Sea Explorer berths in Ilulissat, the iceberg capital of the world. It’s been slow going; the entrance to the harbor was tightly packed with complacent ice, and the captain needed to wait for a departing ferry to chart a path through the everchanging obstacle course. The fire engine red ferry steams past us, gaining speed on its way to the next remote berth and the Sea Explorer eases into a port populated by fishing boats and tiny whaling vessels. Thrusters clear smaller bergs from beside the pier as passengers wrap up warmly for a guided midnight hike.

The sky is bright as we depart, the air crisp and beautifully clear. Children play football on a community pitch as their mothers watch from the sidelines as we walk through sleepy 4,000-strong Ilulissat towards its Unesco-listed Ice Fjord. The sea mouth of the Kujalleq Glacier, one of the few places where Greenland’s icecap reaches the coast, the 95-kilometer long fjord is so clogged with icebergs that have failed to navigate the shallows at the mouth of the waterway that it looks like a glacier itself, an expansive white landscape of gullies, chasms, and fractures. 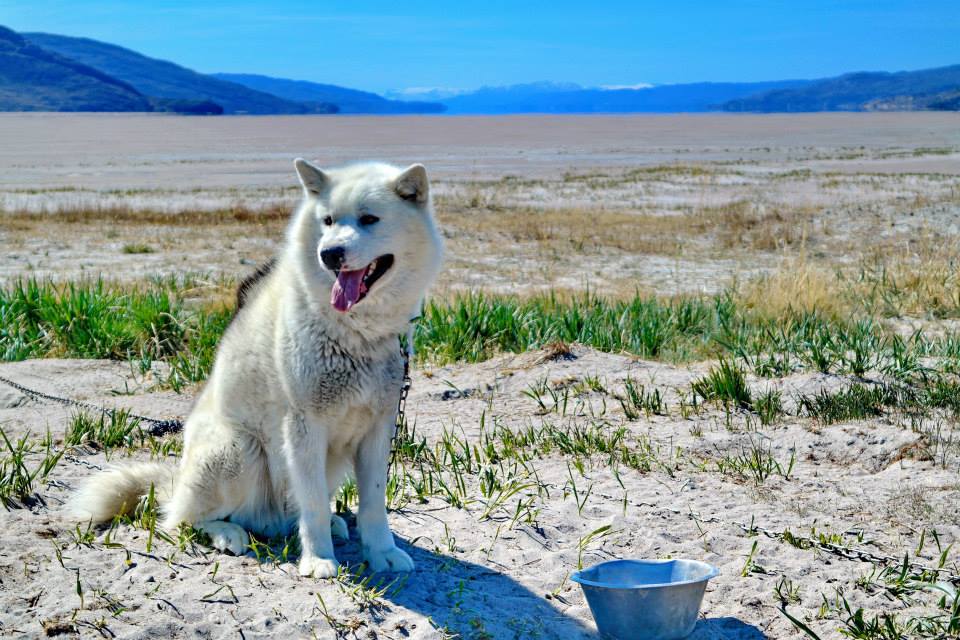 We enter the Unesco site following a boardwalk to the coast where signs warn of tsunami waves generated by iceberg calving – the glacier produces more ice, approximately 20 billion tons a year, than any glacier outside of Antarctica. The view across the ice is mesmerizing, the midnight sun painting the world a golden yellow twilight as we laze in the wild grass and sip champagne.

The air is thick with the scent of salt and ice the next morning as we navigate the ice fjord in a tiny converted fishing boat. Trawlers toot their horns as they pass between us and icebergs the size of shopping malls, their white faces reflecting off the seas as they creak and roll. It’s like we’re cruising through the world’s largest gin and tonic, the silence only split by a red tourist helicopter periodically cruising overhead.

Our final stop on the journey back to Kangerlussuaq is Sarfannguit, a tiny settlement nestled at the base of mist-shrouded mountains. Sarfannguit is immediately my favorite outpost; a beautiful, colorful clutch of weather-worn cottages on steep cliffs overlooking a protected bay in which falcons and kites glide silently in the thermals. At the village school, we’re a thing of fascination to the local kids, Greenlander pups nipping at their tails as they try to keep up with their young masters. The ship far below looks like a toy in the shadow of the mountains, a chilly wind reaching up the valley telling of the winter months to come as our group descends to the pier and our waiting zodiacs. 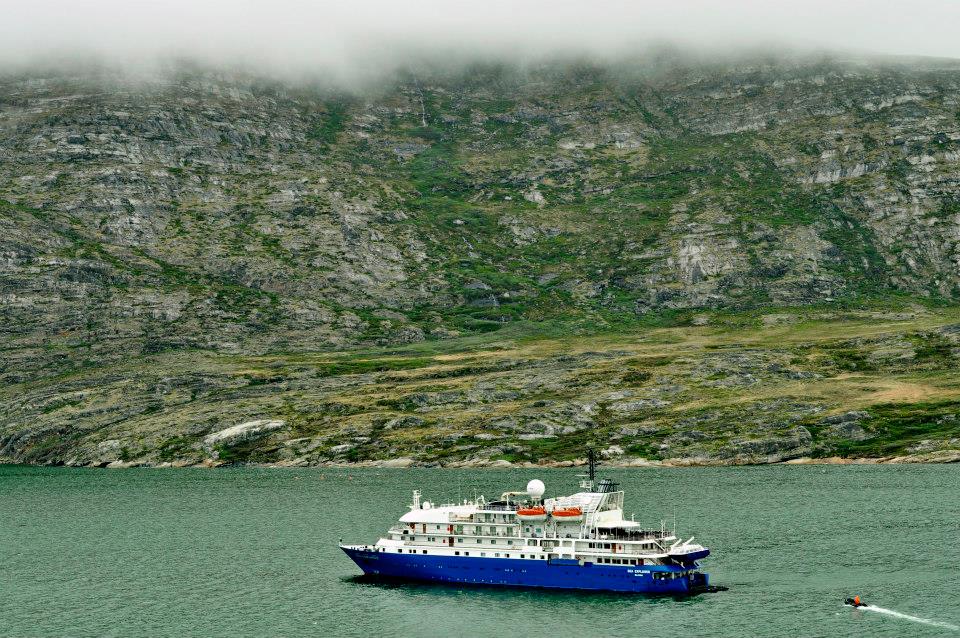 Greenland is a place of welcoming locals, of rich traditions, and of stunning, otherworldly scenery, and after ten days exploring this formidable locale, as the ship sails away down the valley and Sarfannquit is swallowed up by the sea mists, I join the Greenlandic dogs of Kangerlussuaq in pining for her vast, unexplored expanses.