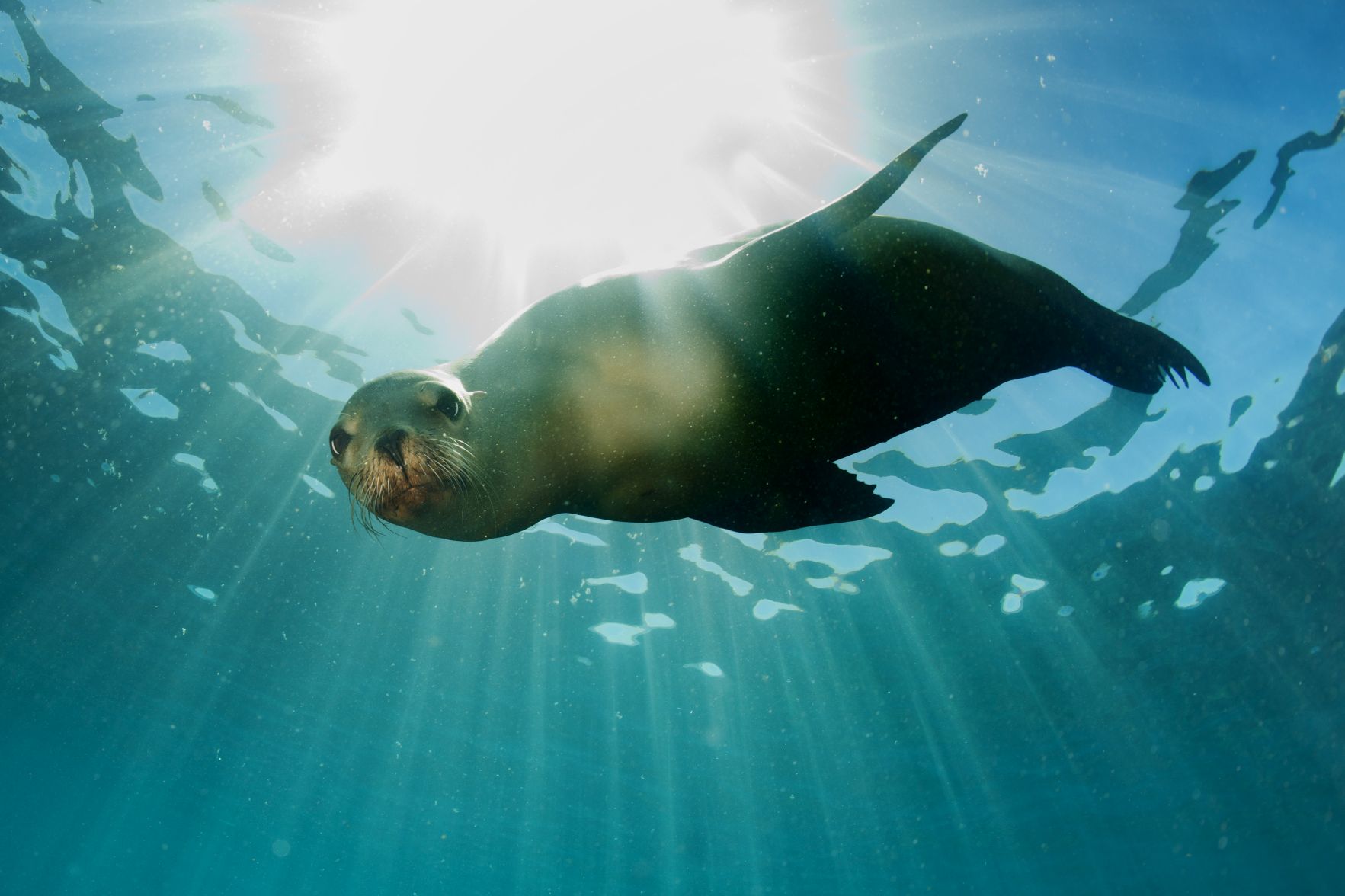 Despite boasting some of the planet’s youngest islands, there is an ancientness about the Galapagos Islands, a remote and fragile chain that’s home to some of the world’s strangest yet most endearing inhabitants.

I learned a long time ago it’s important to connect with the locals when arriving in a new destination, but I’ve not faced this kind of welcome before; there are lizards – ancient, grimacing lizards – literally everywhere I look, and I’m struggling to put my foot down without making one of those locals extremely grumpy. In a scene reminiscent of low-budget 50s sci-fis, ash-hued iguanas, some the size of housecats, with Godzilla-like profiles and long, slender claws, are stacked three deep on the jagged lava coastline, making climbing from our zodiac a very delicate maneuver. I finally take the leap, landing in their ranks, not to be devoured by tiny mouths but to be completely ignored. This is the beauty of the Galapagos Islands, barren volcanic peaks that jut from the ocean 1,000 kilometers off the Ecuadorean coast; everywhere you turn, nature abounds.

It’s our second day exploring this blissfully remote frontier with Lindblad Expeditions-National Geographic, a unique collaboration between the world’s oldest expedition company and the acclaimed natural sciences magazine. One on dry land, our PhD-wielding naturalist Carlos Romero, part of a team of guides aboard the stout expedition ship National Geographic Endeavour, greets our little band of camera-toting travelers and leads our hike along the coast of Fernandina, the youngest (in geological terms just a baby) of the archipelago’s 18 odd islands 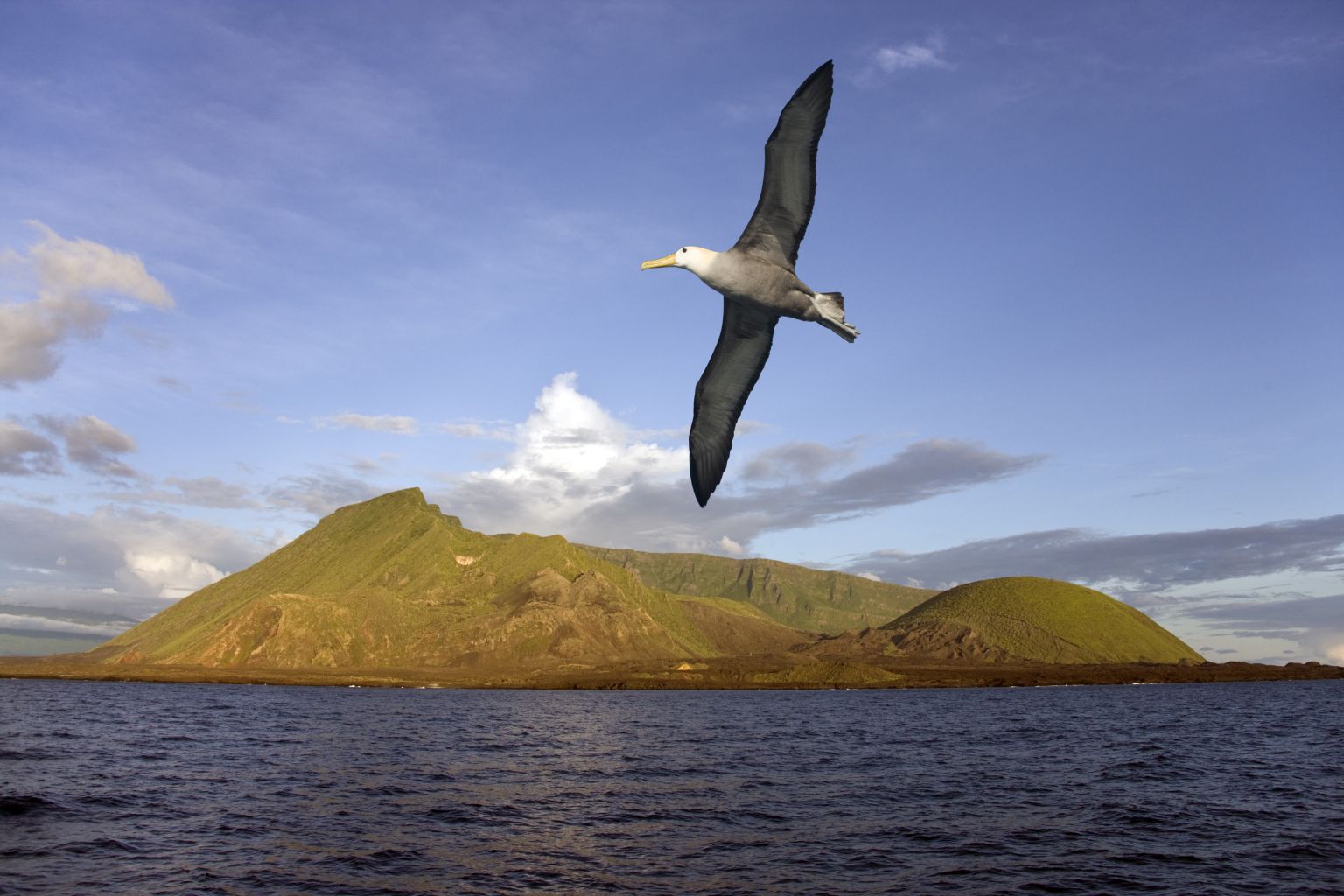 In many ways, Fernandina sums up the Galapagos Islands to a tee. At its center is a towering shield volcano crowned by a cantankerous caldera that’s been in a foul mood since it last began erupting in April 2009. Yet, despite its barren and bleak flanks, the island’s coastline is thriving with life, from somnolent iguanas, who take turns to crawl into the sea in search of their favorite snack, red algae, before rushing back to the lava to warm up; to a myriad of birdlife, some residents, some just passing through. Flightless cormorants, far happier diving deep into the sea than soaring above it, watch us from a rocky outcrop with vivid blue eyes, the saltwater beading off their waterproof feathers. Two seal lion pups play fight in a rock pool before braving a tentative sniff at our hiking boots. In a lagoon wreathed by ancient rock that’s layered like cream cake, a green turtle bobs in the tide searching for lunch.

If towering volcanic peaks, birds that swim like fish, and moody (but at the same timer quite adorable) lizards are the ancient face of Galapagos, then Lindblad Expedition is its modern persona. The company has been operating in the islands for half a century (they pioneered travel here in 1967), long before any other operators saw the potential of this remote locale. With two ships permanently based in the islands, and a crew of experienced guides, many of whom were born in the Galapagos, the cruise line is also the largest single contributor to the efforts of the Charles Darwin Research Station at Santa Cruz, a bastion of conservation policy that has focused its effort on education and preservation since opening in 1959. 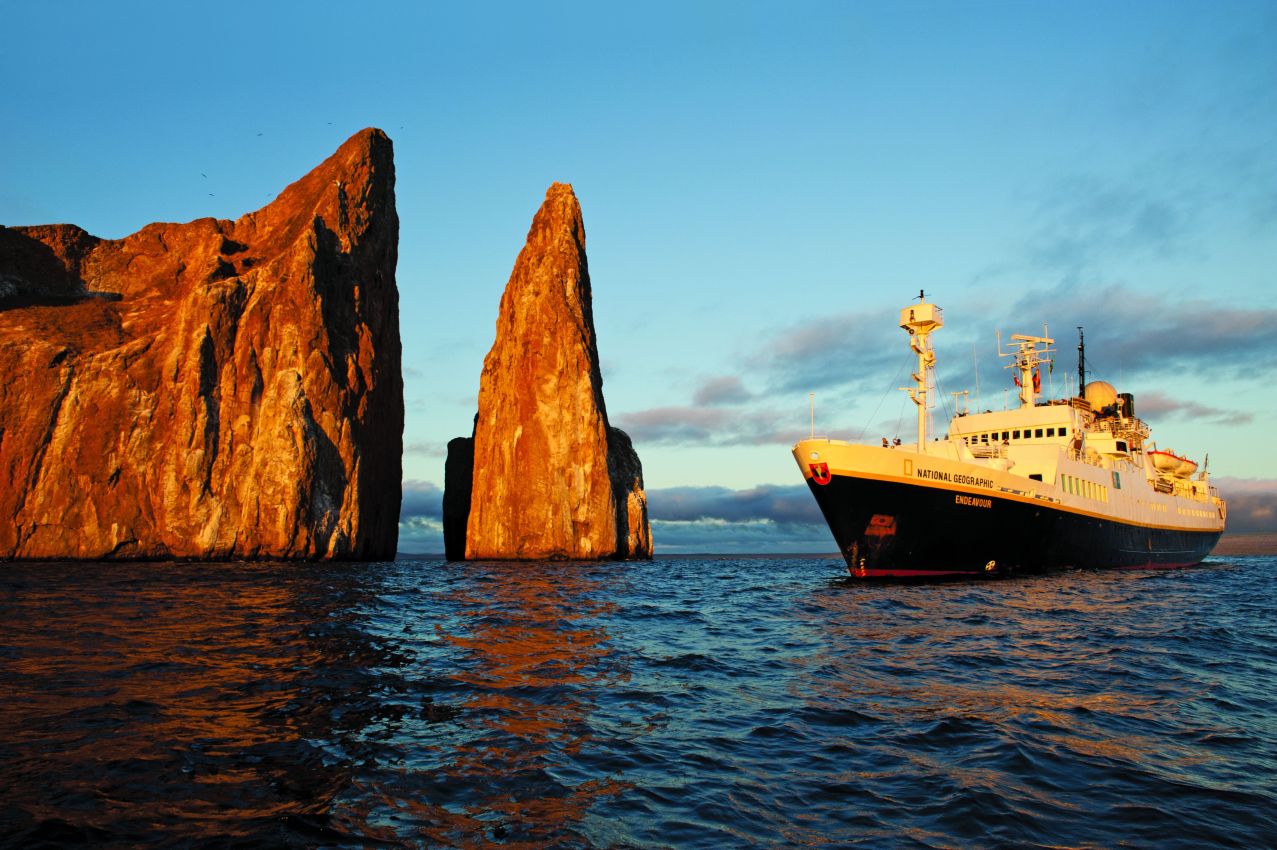 We had met the National Geographic Endeavour, a North Sea trawler turned hardy, 96-passenger adventure cruiser, the day before, after arriving from the Ecuadorian city of Guayaquil. Onboard, our cabin is spacious, clean, and comfortable, with plenty of room to stow luggage, a well-appointed bathroom, and two single bunks. The ship also boasts a small boutique, a spacious lounge where guests meet for daily lectures and evening cocktail debriefs, and an intimate dining room where chefs present South American-influenced comfort food.

Timeless, rather unforgiving landscapes that have changed little since Darwin arrived, the islands of the Galapagos are exactly as nature intended, in balance, ebbing and flowing with the movement of the sea currents which first delivered life to their ancient shores. But this isn’t by chance. Conservation is at the core of the Galapagos experience. A total of 97 percent of the island chain is protected, and inhabitation in the remaining space is carefully controlled by the Ecuadorean government. Tourist numbers have tripled in 20 years, making biosecurity and conservation efforts even more important; Lindblad, like other Galapagos operators, must follow a strict expedition timeline that’s designed to minimize the impact of tourism on wildlife while ensuring every guest gets a chance to enjoy this remote Eden without a flotilla of crowded vessels anchored nearby.

Education is a big part of those conservation efforts and is at the heart of the Lindblad Expeditions-National Geographic experience. Each day we’re briefed on where the ship will sail, what we might see, and how to best prepare for it. At some islands, like seahorse-shaped Isabela, formed by the merger of no less than six shield volcanos, we ride the ship’s military-grade zodiacs in for a wet landing, stepping into the shallows on a deserted beachhead. On others, like North Seymore, home to the world’s largest populations of frigates and blue-footed boobies, we enjoy a dry landing but usually finish off our explorations with a welcomed dip in the warm equatorial waters.

There is always something new to discover and thanks to our guides, plenty to learn. On North Seymore Island we trace the rugged coastline in search of male frigates puffing out their red gular pouches and stretching out their ink-black wings in elaborate mating rituals. Further inland we discover vibrantly-hued land iguanas in every shade of yellow, orange, and red imaginable, and watch blue-footed boobies, fresh from deep seat fishing, feeding new hatchlings.

Snorkeling near Isabela Island with naturalist native Paul Vergara, we’re joined by an inquisitive sea lion, his eyes rarely leaving us as he dives, swoops, and tumbles through the depths, a silver string of bubbles trailing towards the surface. He is quickly dubbed the ‘little showoff’ although he’s bigger than most guests. Beyond, solitary white-tipped sharks and a pair of spotted eagle rays glide by unhindered by our clumsy splashing above. During regular photographic expeditions with National Geographic-certified photographer Christian Saa, we brush up on our use of light and ISO to get the perfect picture of vibrant pink flamingos, flightless cormorants, proud Galapagos hawks, and even the islands’ own tiny penguin species.

There’s also plenty on offer aboard the ship. One afternoon, as the National Geographic Endeavour steams south, Galapagos’ first Fulbright scholar Jonathan Aguas leads us through the history of his island home, from the arrival of the first explorers and the observations of Darwin, through to the land scuffles between eccentric German utopianists and a larger-than-life Baroness and her two flunkies. As we cross the equator for the 6th time guests gather on the bow for a cheese and wine-laced sunset soiree.

We finish our exploration of the Galapagos in the lush highlands of Santa Cruz, one of the few inhabited islands in the chain. There’s time to visit a primary school that Lindblad supports, its classrooms wreathed by brightly colored hand-painted giant tortoises, before we climb the island’s peaks in search of the real thing. We come across these huge, ancient animals in a swampy paddock, one of their favorite spots during their seasonal migration.

The iconic giant tortoises, certainly one of the Galapagos’ biggest drawcards, have a lot in common with their remote island home. On the outside, they seem hardy and built to last forever, but the reality is that, like the vibrant ecosystems we’ve explored over the past week, they’re surprisingly fragile and will only survive our ever-changing world with a sustainable balance of awareness and conservation. Fortunately, companies like Lindblad Expeditions and its partner National Geographic are paving the way for responsible tourism that will ensure these remarkable islands and their other-worldly inhabitants will be safeguarded for generations to enjoy.

Getting There: Oneworld carriers Cathay Pacific and American Airlines can connect guests from most points on the compass with Guayaquil in Ecuador, where charter flights depart for the Galapogas.

When Two’s A Crowd