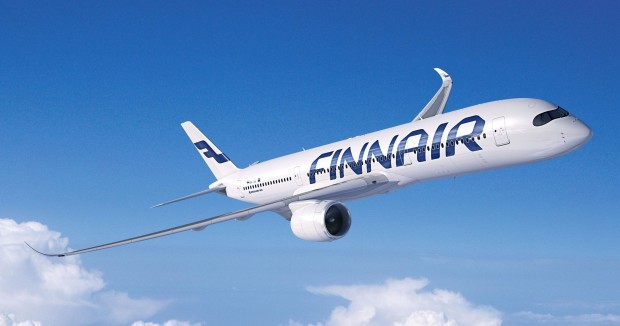 Finnair offers the fastest route between Hong Kong and Europe and does so using a state-of-the-art Airbus A350 aircraft, ensuring a truly luxurious encounter.

Finnair was the first airline to operate the Airbus A350 from Hong Kong to Europe and the new aircraft has allowed the Finish national carrier to cement its position as a significant European player in the competitive Asia aviation scene.

I received approximately 20 emails from Finnair in the months leading up to my trip between Hong Kong and Prague via Helsinki, each offering me the opportunity to purchase aspects of the flight that were already included in Business Class. When the travel date did come, I also found the Finnair app froze repeatedly and seats selected months before for the long-haul flights had been forgotten, although the short-haul selections had been retained. Fortunately, a call to customer service quickly fixed the problem.

Twenty minutes before check-in, I received another message informing us that the Helsinki-Prague flight would be “exceptionally” operated by Danish airline Jet Time rather than Finnair. The same happened on our return journey. However, the flights were short and the service on the alternative airlines was perfectly adequate. 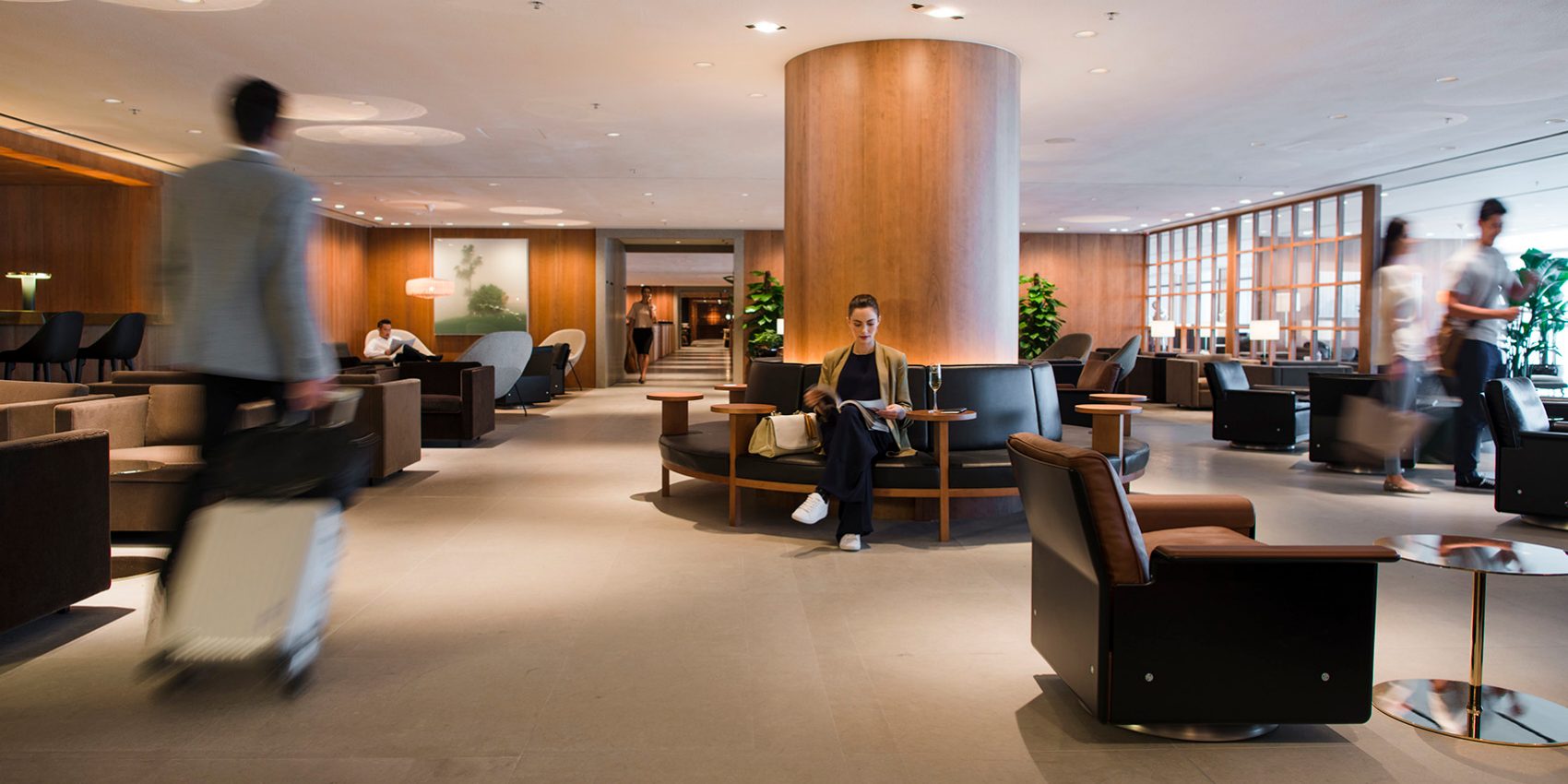 After a relatively painless check-in process at a dedicated business class counter, we made our way through security and immigration. Although Finnair has a deal with Plaza Premium Lounge at HKIA, their lounges in Hong Kong are usually extremely crowded, so we opted instead to go with one of the airline’s oneworld partners. The Cathay Pacific lounge The Pier, located near our departure gate, was recently renovated and is among the best airline lounges in Asia, with a great dining selection, plenty of seating options, and a great cocktail bar.

The boarding process at gate 62 was smooth and efficient and we quickly found our seats on the A350, which boasts 46 business class seats in two cabins. A bottle of water and a menu was already in place at my window seat, as well as a pair of Bose QuietComfort 25s, arguably the best noise-reduction headphones on the market (at the time). We departed on time, for a ten-hour ten-minute journey to Helsinki Vantaa.

The Finnair A350’s business class cabin is minimalist and contemporary, as are the lie-flat seats, which are laid out in a 1-2-1 configuration allowing all passengers direct aisle access. You’d think this would be the norm by now but many major carriers, including Emirates (on the 777) and Korean Air still want you to clamber over your sleeping seatmate mid-flight. The Finnair seats are angled away from the aisle, offering a little additional privacy, and each features a handy shelf for writing, a reading light, easy to operate seat controls and USB and AC power ports. 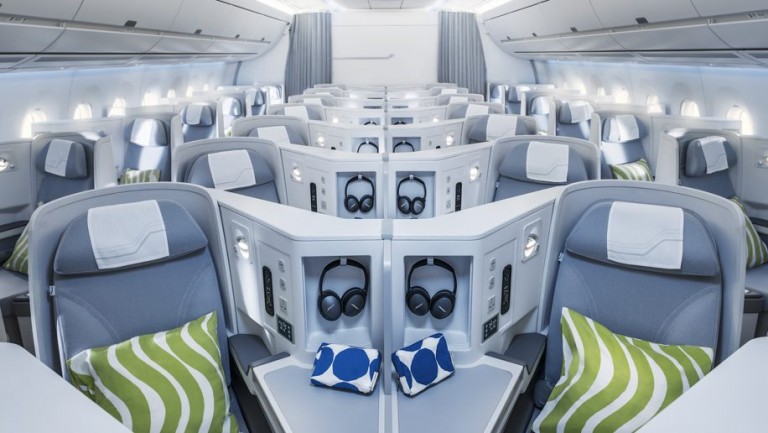 While the seat is very comfortable, it lacks storage spaces (even in areas where Cathay Pacific and American Airlines, who have a very similar product, have storage nooks), although there is a handy little cubby hole that’s accessed under a padded lid. When the seat is in bed mode it converts into a 78-inch-long slice of heaven (the bulkhead seats offer an extra 1.3-inches of length), especially when coupled with oversized pillows and warm blankets and a great night’s sleep was all but assured.

The crew was quick to commence the dinner service due to the late hour of our evening flight. The majority of the crew are Asian, showing the importance the airline places on the region, and soon after reaching cruising altitude they served glasses of Nicolas Feuillatte Brut Crande Réserve Champagne in striking glasses by Tapio Wirkkala, although there’s also an option to try one of the airline’s innovative signature cocktails, which include the Golden or Blue Sky, with Lapponia cloud and blueberry liquor topped with Joseph Perrier Cuvee Royal Brut; a gin and tonic made with Kyro Napue gin and Indian Fever Tree tonic, garnished with cranberries; and the Salmarikossu, an interesting blend of Koskenkorva vodka and Salmiakki, a salty licorice extract.

Dinner started with a choice of prawns with a dried bean curd salad; or roast beef and potato salad with mushrooms, a creation of Hong Kong restaurant FINDS’ executive chef Jaakko Sorsa. This was followed by a choice of salmon with leek cream sauce, boiled potatoes and vegetables; braised duck with chestnut, shiitake mushrooms, and pak choi; a salad of beef pastrami or feta; and a Finish creamy salmon soup. The beef appetizer was earthy and delicious and was paired with the hearty soup and a glass of Abeille de Fieuzal Pessac-Leognac 2014, an elegant blend of Sauvignon and Semillon grapes.

After dinner, we were offered a choice of Swiss Emmental and Blue d’Auvergne cheese, and ice cream, but I instead opted for a glass of 1997 Barão de Vilar Colheita Port before getting some sleep. 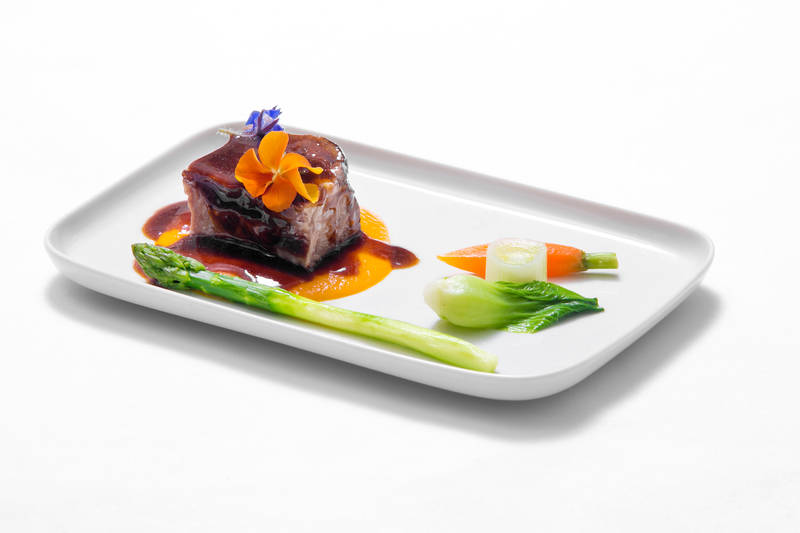 Before arrival in Helsinki, we were offered the choice of a frittata with spinach, pork sausage, Lyonnaise potatoes, and mushrooms; crepes with apricot jam and blueberry compote; porridge or granola. However, it was very early, and many passengers decided to skip the meal and sleep a little longer.

Due to the late hour of Finnair flights departing Hong Kong, a Midnight Menu is also available that combines a salad, a main and a cheese plate on one tray for quicker service.

The young and enthusiastic crew made dinner service look like a breeze and were attentive throughout the night flight, which is always refreshing when so many cabin crews hide behind those magical galley curtains. When my entertainment system froze, they patiently reset it three times until it worked as intended. Throughout the flight, the crew were diligent, attentive and charming, which is also refreshing given slipping service standards in Asia. The breakfast service was also performed quietly, and we slept right through.

The Finnair business class seat features a 16-inch HD personal screen and when coupled with the aforementioned Bose headphones offers a great entertainment experience. Initially, I was surprised to see a total of only seven films available, but the crew quickly fixed the glitch, offering access to an impressive range of movies, television shows and audio tracks. The system is intuitive and responsive. I especially liked the channels that accessed the A350’s cameras. 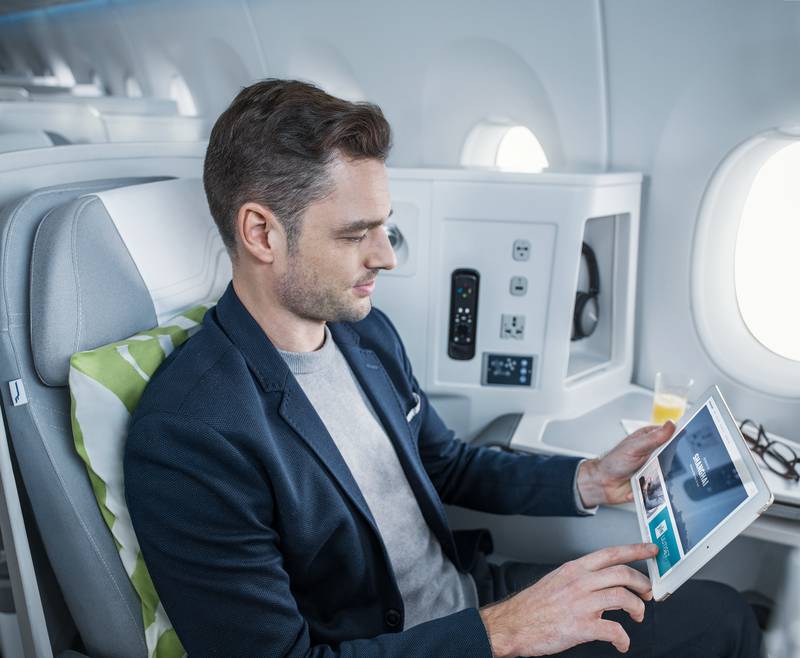 The dining options really reflected the destination – especially with the input from Chef Sorsa – and the service throughout the journey was top notch.

The constant sales pitches for the Finnair shop (pre-flight, in-flight announcements and crew roaming the cabin with catalogues) was a little painful.