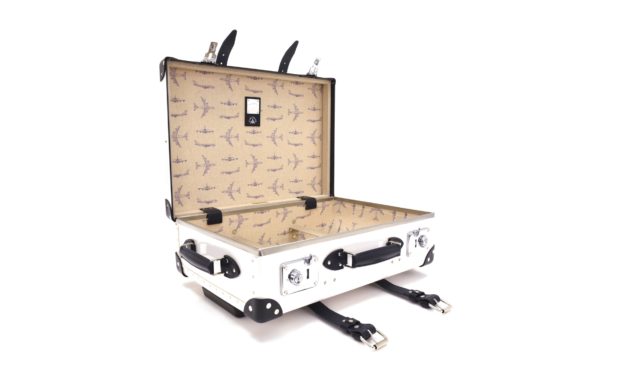 In the market for luggage that instills a timeless design and also captures a slice of history? British Airways and Globe-Trotter’s new 747-inspired carry-on might be perfect.

Everyone (of an age at least) remembers their first trip on a Boeing 747. The original jumbo enchanted the flying public from its first take-off on February 9, 1969, and of the many carriers that were to fly the aircraft type in the years since, it was British Airways that always had a very special relationship with the Queen of the Skies.

So it’s fitting that only months after the airline announced that it had brought the retirement date of its 747 fleet forward, due to the impact on the aviation industry of Covid-19, it should collaborate with fellow British brand Globe-Trotter to create a very special luggage line celebrating the carrier’s jumbo jets.

The new carry on case, limited to just 150 units, is marked with the unmistakable Speedbird insignia of British Airways (called BOAC at the time of receiving its first 747) and takes its inspiration from the airline’s 747’s original livery of dark blue and white, a look that epitomizes the glamorous age of luxury air travel to this day.

Constructed from Globe-Trotter’s popular vulcanized fibreboard body, which ensures it’s both durable and feather-light, each case is expected to take on an eye-catching pearlescent shine that contrasts with its navy blue leather corners and handles. The gold Speedbird insignia takes center stage, but travelers will also appreciate that each case also boasts a precious fragment of an actual 747 aircraft, set into its interior lid, creating a mark of history that is truly one of a kind.

Nick Walton travels back in time with a visit to r

After spending a year at home, in 2021 adventurers

Nestled on the banks of Lake Geneva, in the French

Planning for wind-whipped destinations ahead? Cana

Has Saudi Arabia been on your list ever since the

Eager to hit the open road? There’s nothing like

Located on a beautiful plot of coastal boardwalk i

Joining the Oceania Cruises fleet in 2023, the Vis

Fresh from his winning row across the Atlantic we

Looking for a holiday destination that's more than

These Are Your New Travel Headphones

The City on the Lake

Rugged as the Road