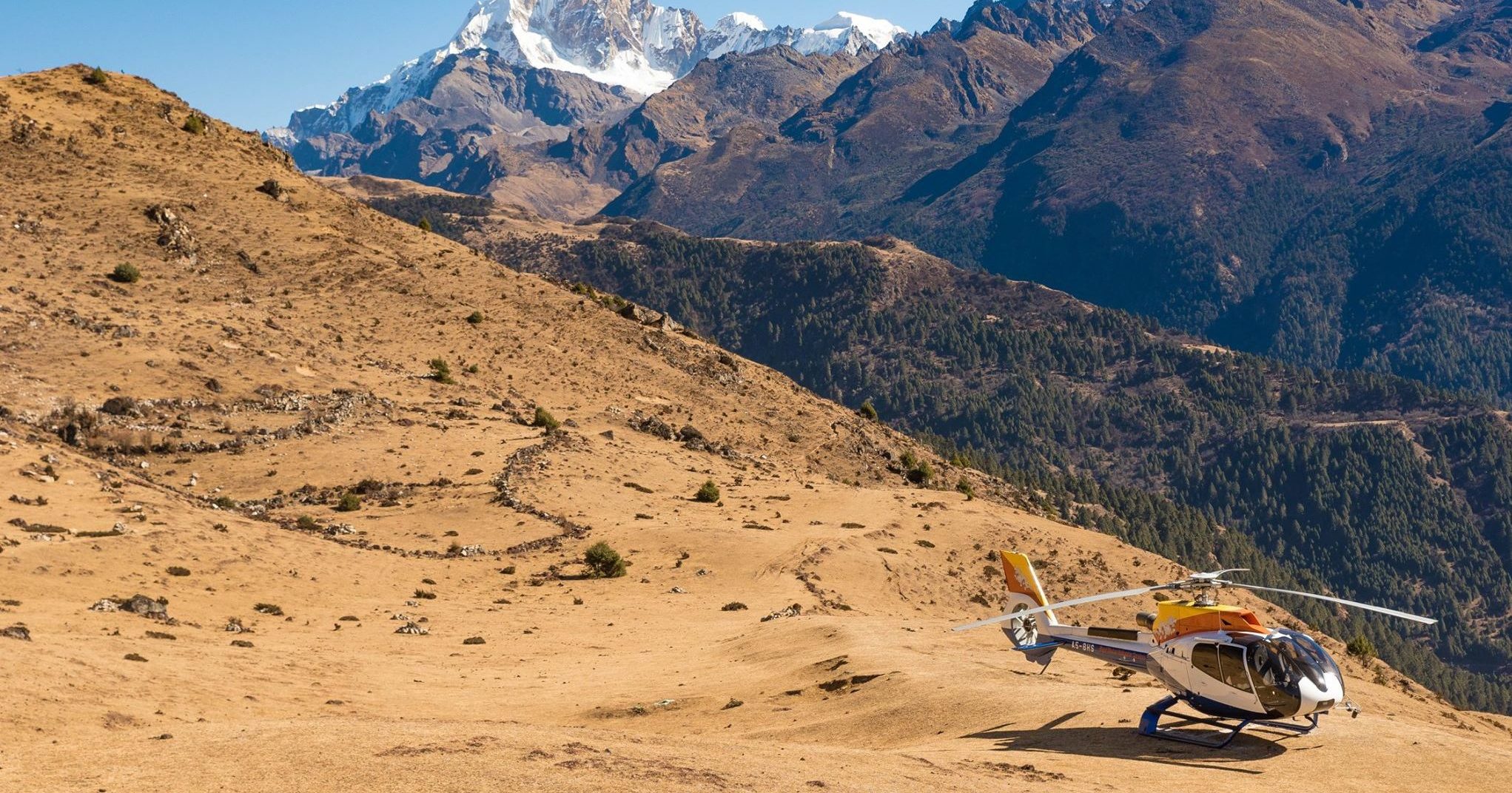 Nestled between two gigantic neighbors, the tiny kingdom of Bhutan is a majestic, serene, and breathtakingly beautiful hideaway high in the Himalayas.

Emerging from the pint-sized terminal at Paro, Bhutan’s sole international airport, new arrivals are greeted by dazzling sun, crisp mountain air, and most invitingly, a bevy of genuine smiles. The warm welcome from assembled guides dressed, as many Bhutanese still do, in pristine national robes, brings color back to the faces of air travelers who have just experienced one of the most nail-biting landings on the planet. Only 12 pilots in the world are certified to land in Bhutan as it requires a series of hair-raising turns as aircraft fly the length of the Paro Valley before landing in the lining up with the runway, brightly-painted houses perched on steep mountain flanks whip past on either side.

It’s my first visit to Bhutan, although the remote Himalayan Buddhist kingdom has been on my personal bucket list for a decade. I’ve always been intrigued by a destination that has remained so well fortified against the onslaught of modernity, that has retained an ancient (and well-loved) monarchy, and which measures its progress, not in dollar signs or market points, but in happiness, literally. Bhutan’s Gross National Happiness (GNH) index, a measurement of the collective contentment of the Kingdom’s 740,000 citizens, is a remarkably progressive approach for a country named after an ancient thunder dragon. Coined in 1972 by Bhutan’s fourth king, HM Jigme Singye Wangchuck, the idea has evolved into a socioeconomic development model recognized by the UN. 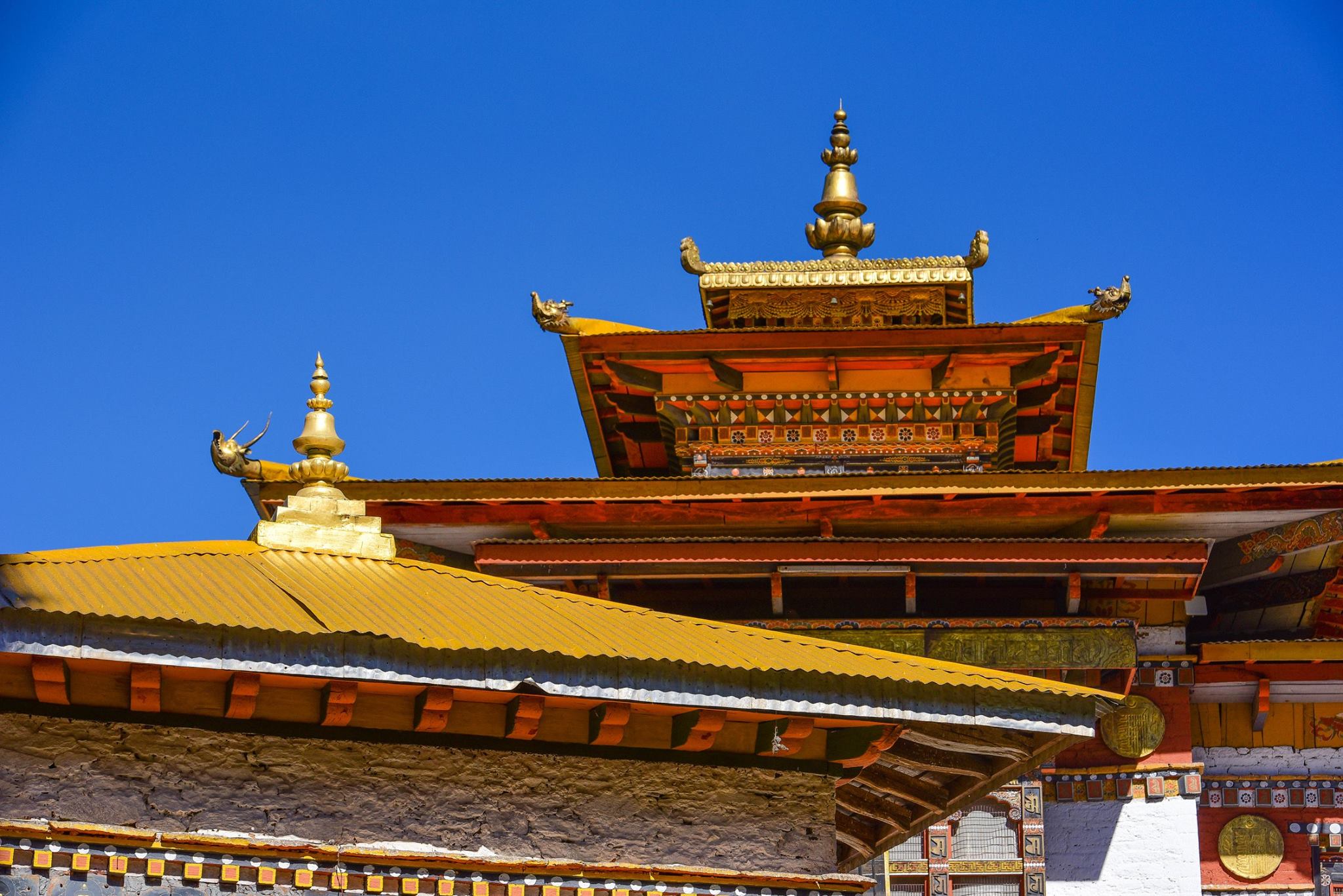 There’s no doubt Bhutan is a land of happiness and peace, and that has translated to an increasing number of well-heeled visitors. Despite a complicated visa application process, mandatory guides, and a daily per diem of US$250 per person, which has traditionally keep visitor numbers low (in 2014 Bhutan welcomed 134,000 travelers, compared to North Korea which welcomed more than 250,000 in 2014) more and more intrepid souls find themselves clinging to their airplane armrests in pursuit of their own little slice of Himalayan harmony.

My own trip begins at Como Uma Paro (below), an intimate 29-room hideaway that, like virtually everything in this vertiginous nation, is perched on the side of a steep hill. Here, the first stop of Como’s groundbreaking Scenic Heli-Adventure, it’s very easy to be happy; there are roaring fires, comfy beds, and shy but attentive staff dressed in elegant, silken kira dresses. There’s the Como Shambala Retreat, home to Bhutanese-inspired massages and an indoor pool, and Bukhari, a restaurant serving healthy, hand-ground buckwheat noodles, yak dumplings, and Como’s iconic juice blends. 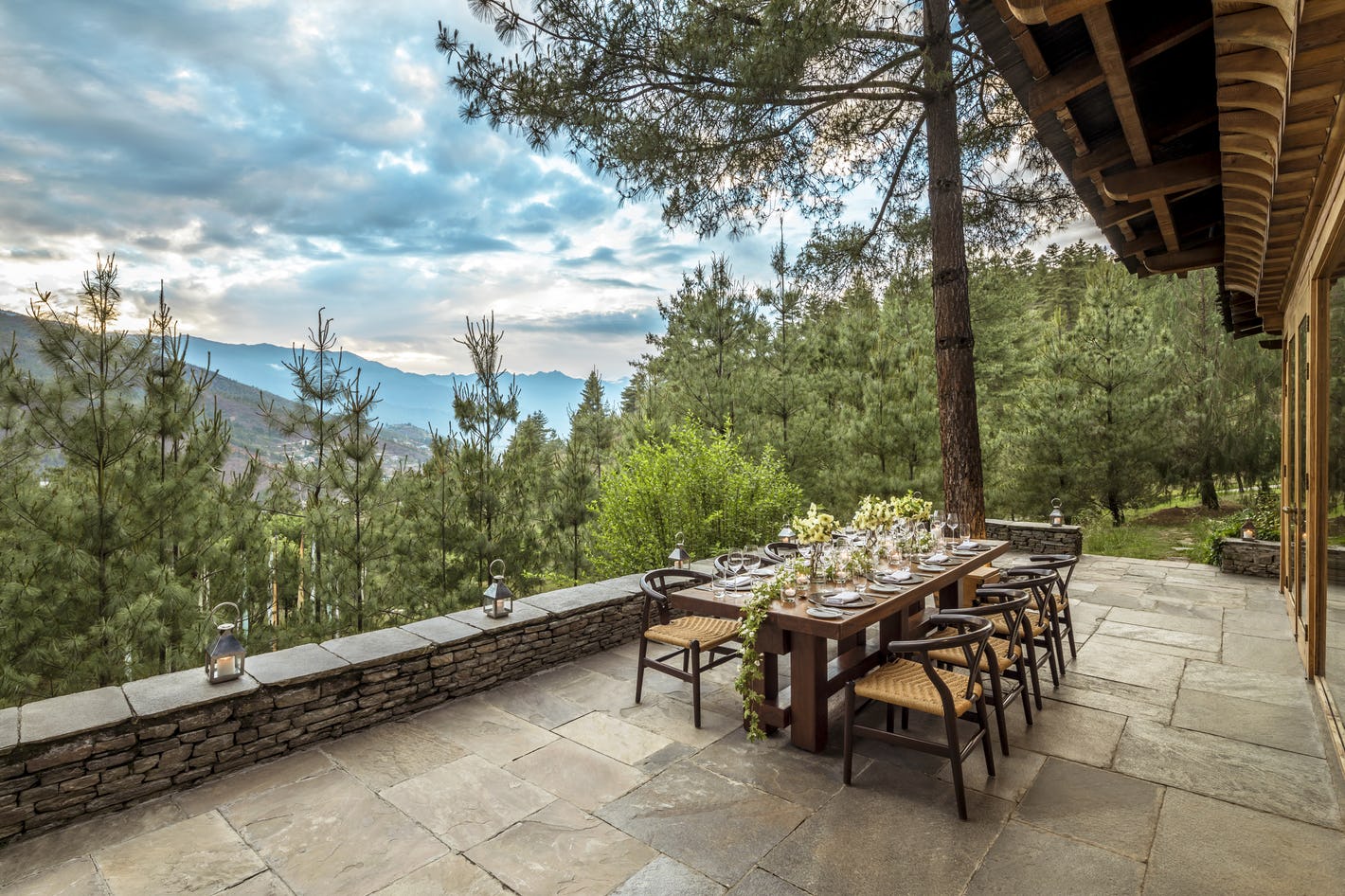 The next morning I’m off to Bhutan’s capital, Thimpu, a serene little city nestled on the west bank of the Thimphu Chuu, making it the world’s third-highest capital. At its center, a police officer, resplendent in his immaculate uniform and white gloves, directs traffic from a tiny hut decorated in bold reds and yellows. Bhutan has worked hard to improve its infrastructure, but when the country’s first traffic light was hoisted at the same intersection, so many accidents occurred that it was quietly lowered again that very evening. I guess happiness is sometimes found in not fixing something that isn’t broken.

The quiet of the capital is only interrupted by the cries from the khuru field, where the national sport of archery is the biggest ticket in town most weekends. Players adorned in national dress aim for a tiny bullseye from some 150 meters downfield. Teams jostle and challenge each other across the length of the field in an artful tradition called kha shed, which involves verbal teasing adorned in rich literary language that’s meant to distract the competing archer. 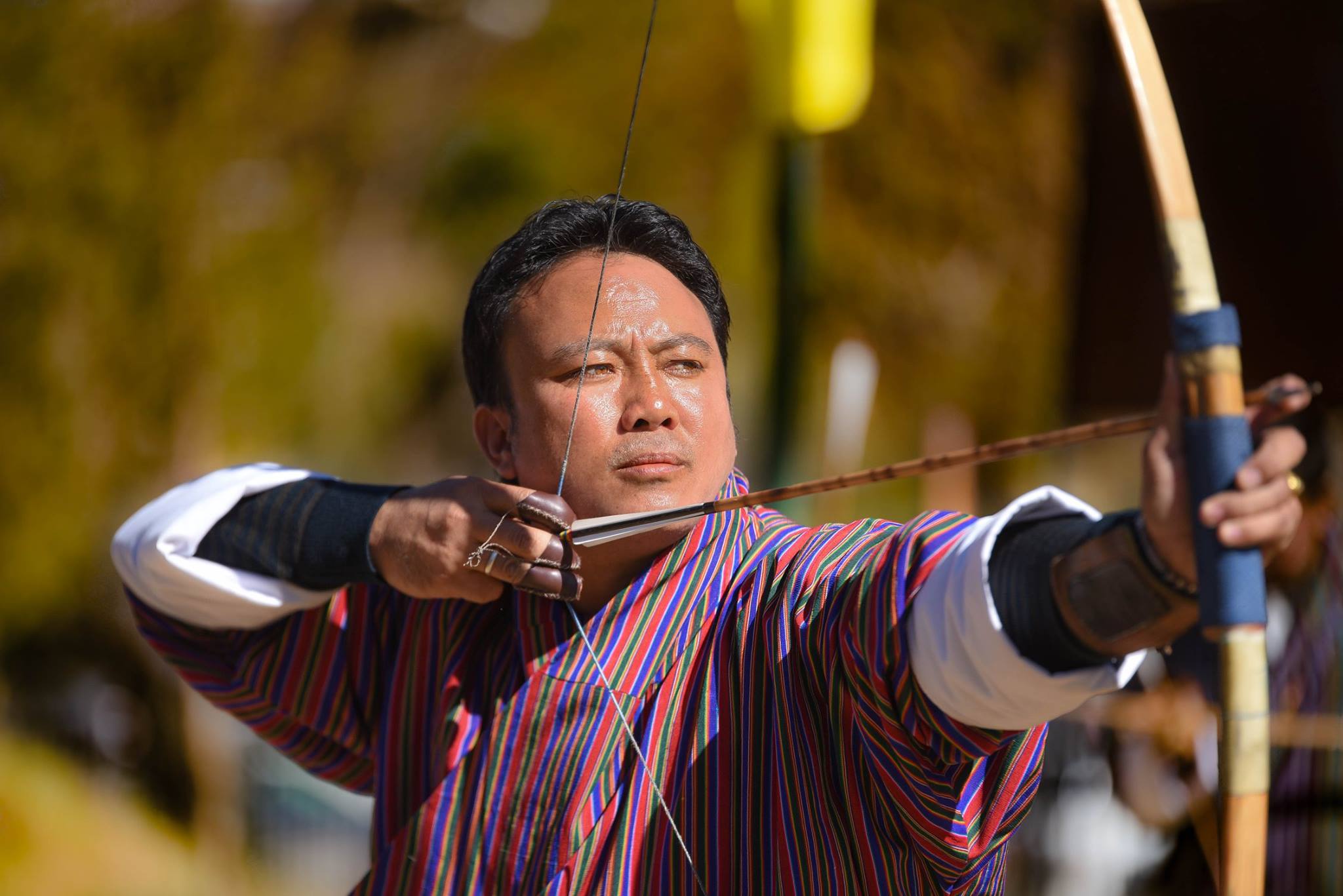 When the bow is finally loosened, all eyes turn to the sky, the bolt streaking through the sunshine and landing steps from leaping opponents. A missed shot is met with more polite taunts, but a successful strike leads to a respectful, traditional dance that blesses the target and acknowledges the talents of the archer. There are smiles, singing, and dancing at both ends of the field before skills are praised, bolts bestowed, and friendly rivalries stoked with more than a few drops of local ara rice wine.

From the capital, I climb high above the valley, passing rumbling Indian-made trucks decorated in protective religious motifs, and at the summit of the Dochula Pass, I visit the solemn Druk Wangyal Chortens, a memorial of 108 stupas, notably dedicated to both soldiers and enemy rebels who fell during the Assamese uprising of 2003-04, the first military conflict ever for the Royal Bhutan Army. It is a telling monument to Bhutan’s respect for life and peace. 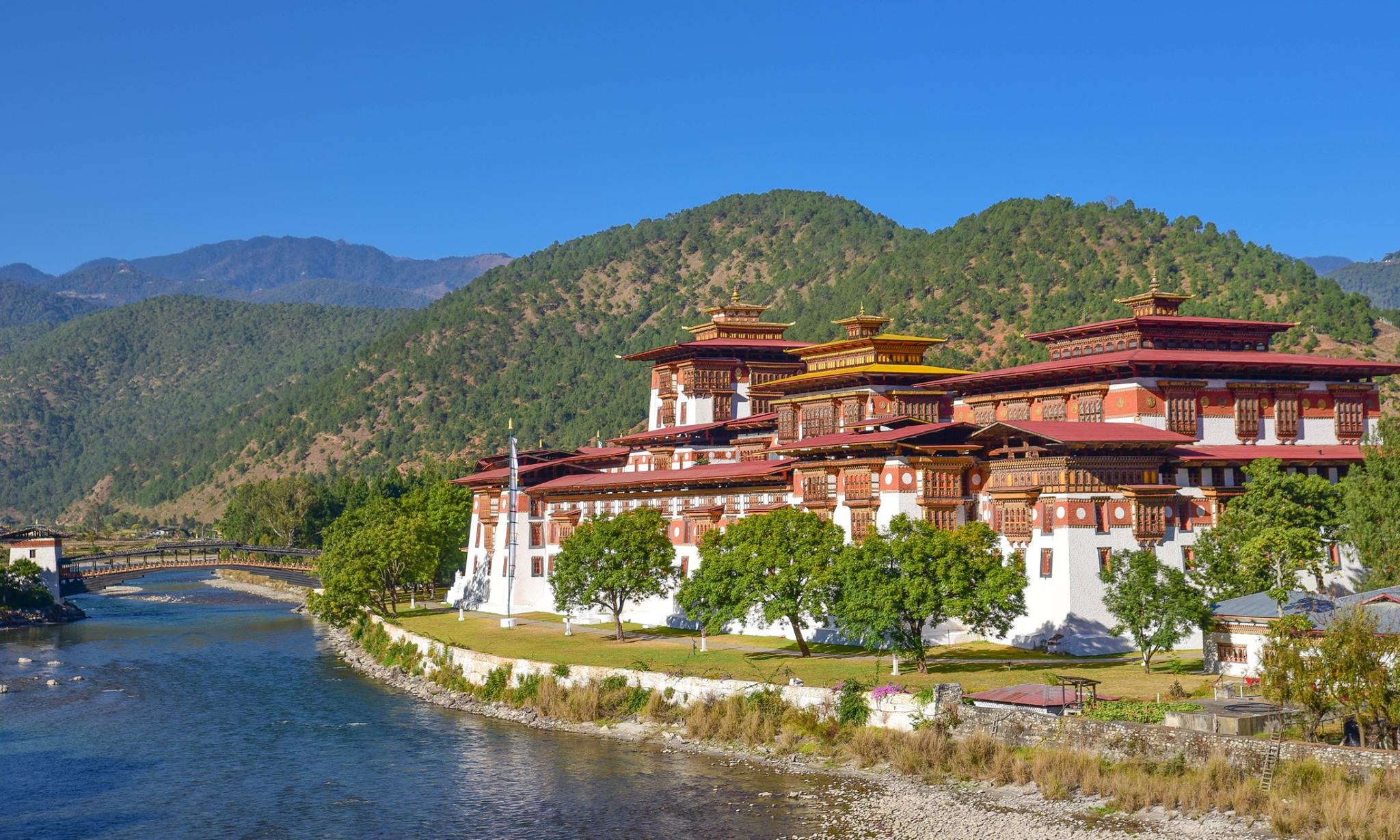 By dusk, we’ve weaved our way through the farming hamlets of the verdant Punakha Valley, where rice paddies are being replanted and water buffalo slosh through the mud, and I’m in my spacious suite, one of 11 at Como Uma Punakha (below), a luxurious mountain retreat designed by architect Cheong Yew Kuan that overlooks the meandering Mo Chu River. There’s timeless sheesham-wood furniture, a wood-burning stove, and a deep-soak tub that’s perfect for Punakha’s frosty nights. Nearby, the retreat’s dining room (a favorite with passing Bhutanese royalty), produces inspiring local fare from organic produce sourced from surrounding farms.

Sated and rested, I set out the next morning to explore the valley. We first climb to Chimmi Lhakhang, a 15th-century fertility temple dedicated to Drukpa Kuenley, a Buddhist saint who is said to have defeated evil spirits with his ‘Thunderbolt of Flaming Wisdom’, earning him the nickname the Divine Madman. From this odd shrine, I head to the breathtaking Pungtang Dechen Photrang Dzong, the valley’s ancient fortress, which dates from 1637.

Beyond the fortifications, the fields are alive with color as a thousand Buddhist faithful assemble to hear a sermon by Trulku Jigme Chhoedra, the country’s religious leader. There are monks swathed in terracotta and tangerine kasayas; elders from the mountain villages in black ghos and white shawls with matching whiskers; giggling novices with freshly shaved heads; and wizened old women wrapped in silk scarfs the color of glacier water. We’re made to feel welcome, despite being the only westerners present, and I soak up the ambiance of harmony and peace like a thirsty man at an oasis. 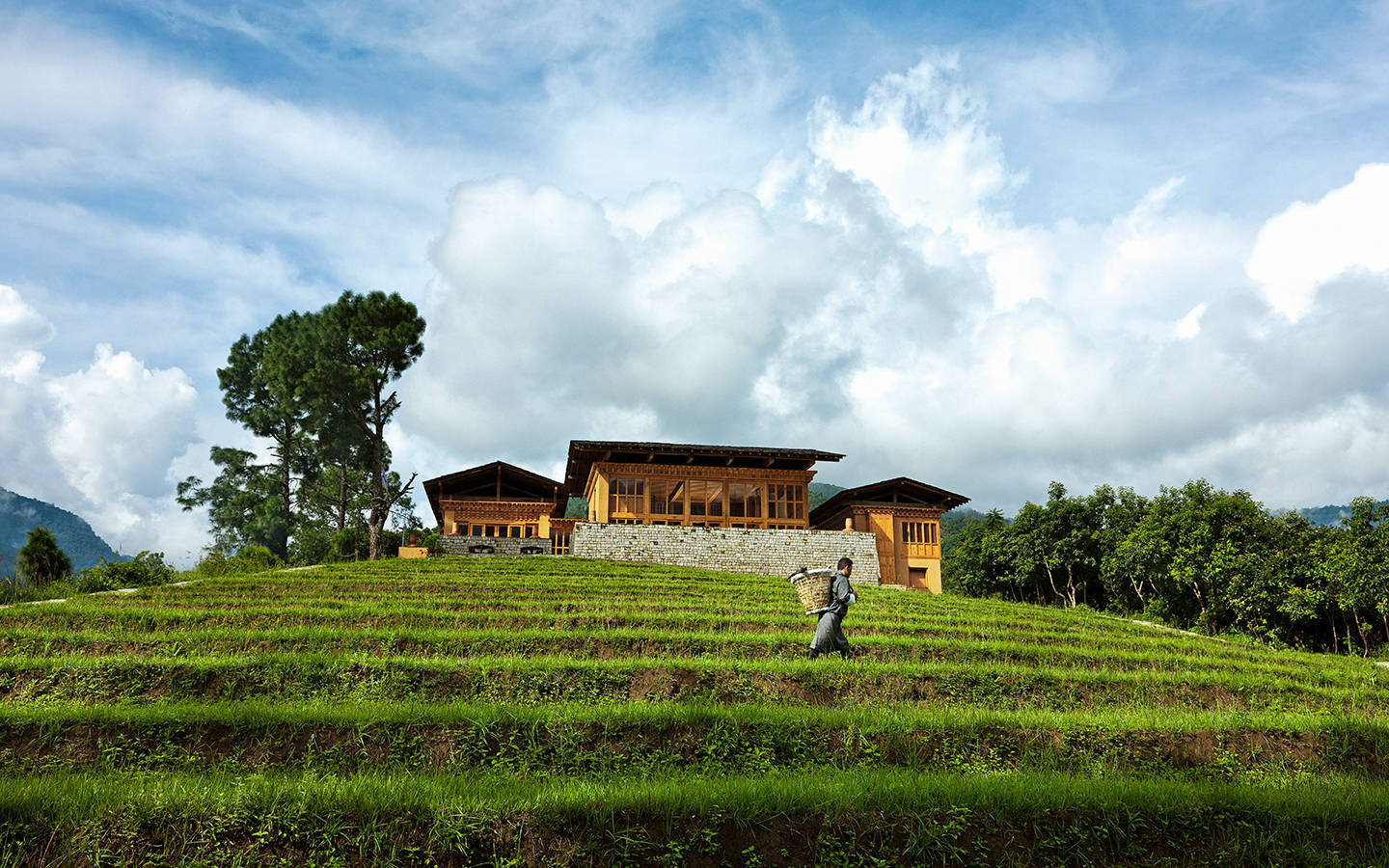 With the dawn, I’m headed down the dusty road from Como Uma Punakha to a field beside the river where a modern helicopter awaits. In a pioneering partnership with the Royal Bhutan Helicopter Service (the kingdom’s fledgling air ambulance fleet), well-heeled travelers staying at Como’s properties can now be among the first to visit some of the kingdom’s most remote corners as part of a six-night scenic heli-adventure that includes two flights – from Paro to Punakha via the rarely-visited Laya Valley, and from Punakha to Paro via Utsho Tsho, the ‘Turquoise Lakes’ of the Labatama Valley. I’ve managed to hitch a ride in the opposite direction, visiting Laya en route to Paro’s international airport.

With a roar from the turbines that reverberates off the mountainsides, British captain Nik Suddards pilots the new Airbus helicopter up Punakha Valley, offering a bird’s eye view of the Nalanda Monastery and the sacred peaks of Jigme Dorji National Park, home to snow and clouded leopards, Himalayan black bear, red pandas, and ancient glaciers. After 40 minutes in the air, we circle the tiny village of Laya, the Kingdom’s highest settlement at 13,500ft (4,115 meters) above sea level. 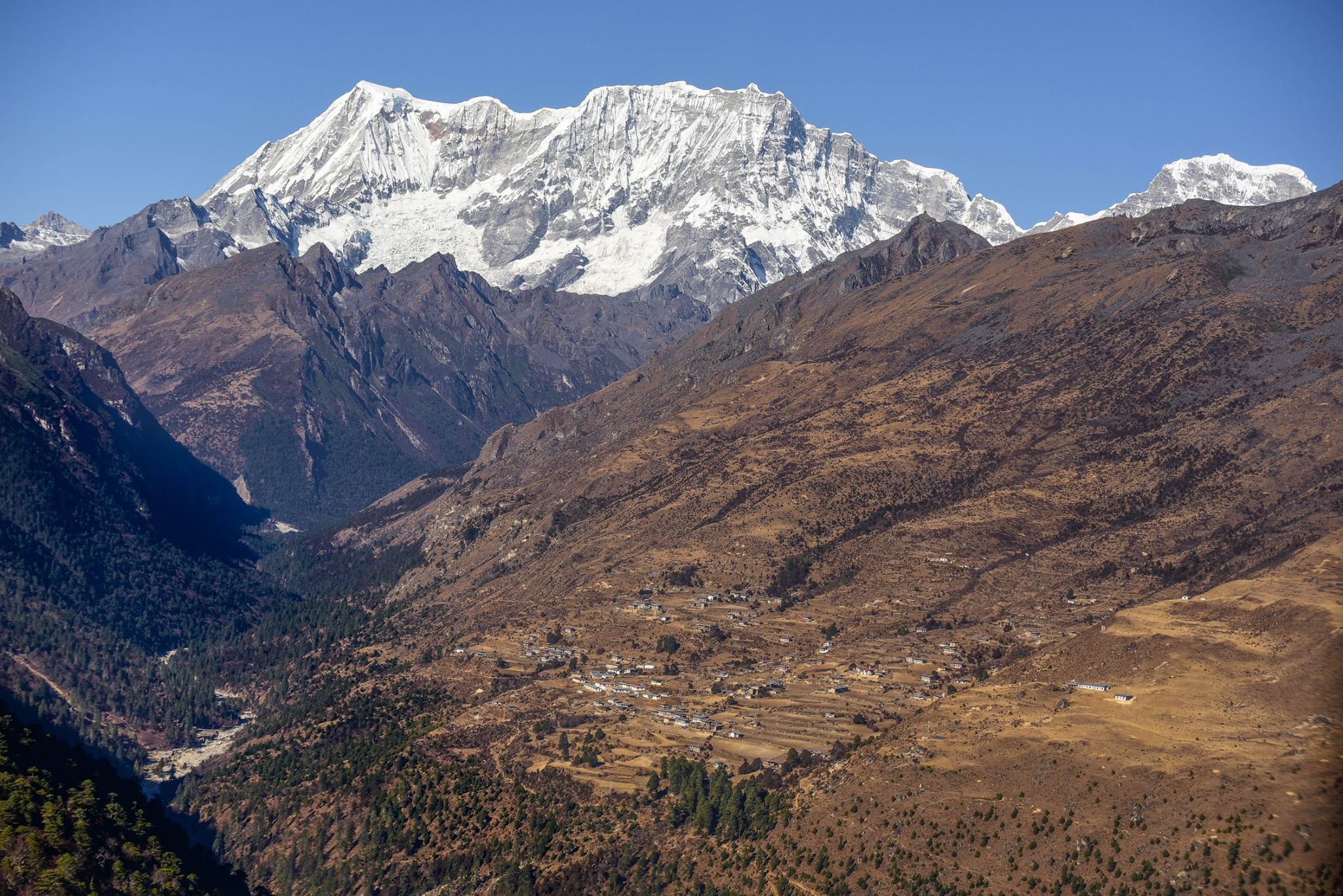 Located in one of the most remote and least developed parts of the country, Laya (above) is home to the semi-nomadic Layap people, a relatively affluent community that harvests cordyceps, a rare fungus used in Chinese and Tibetan traditional medicine. Their Bey-yul, or hidden paradise, is protected from mischievous spirits by an ancient gate at the village entrance. Foreigners are extremely rare in Laya, as are helicopters, and after landing above the village, we’re greeted by curious locals, including two young and very shy sisters leading a trail of hardy mules – I’m the first foreigner they’ve ever seen.

Our last day is spent climbing to the Taktsang Palphug Monastery (below), a prominent Himalayan Buddhist site also known as the Tiger’s Nest that’s set on the side of a dramatic cliffside. Reaching the top is not as challenging as it was when the monastery was built in 1692, when pilgrims had to risk life and limb on tiny footholds set into the rock of the canyon that plunges between trail and destination. 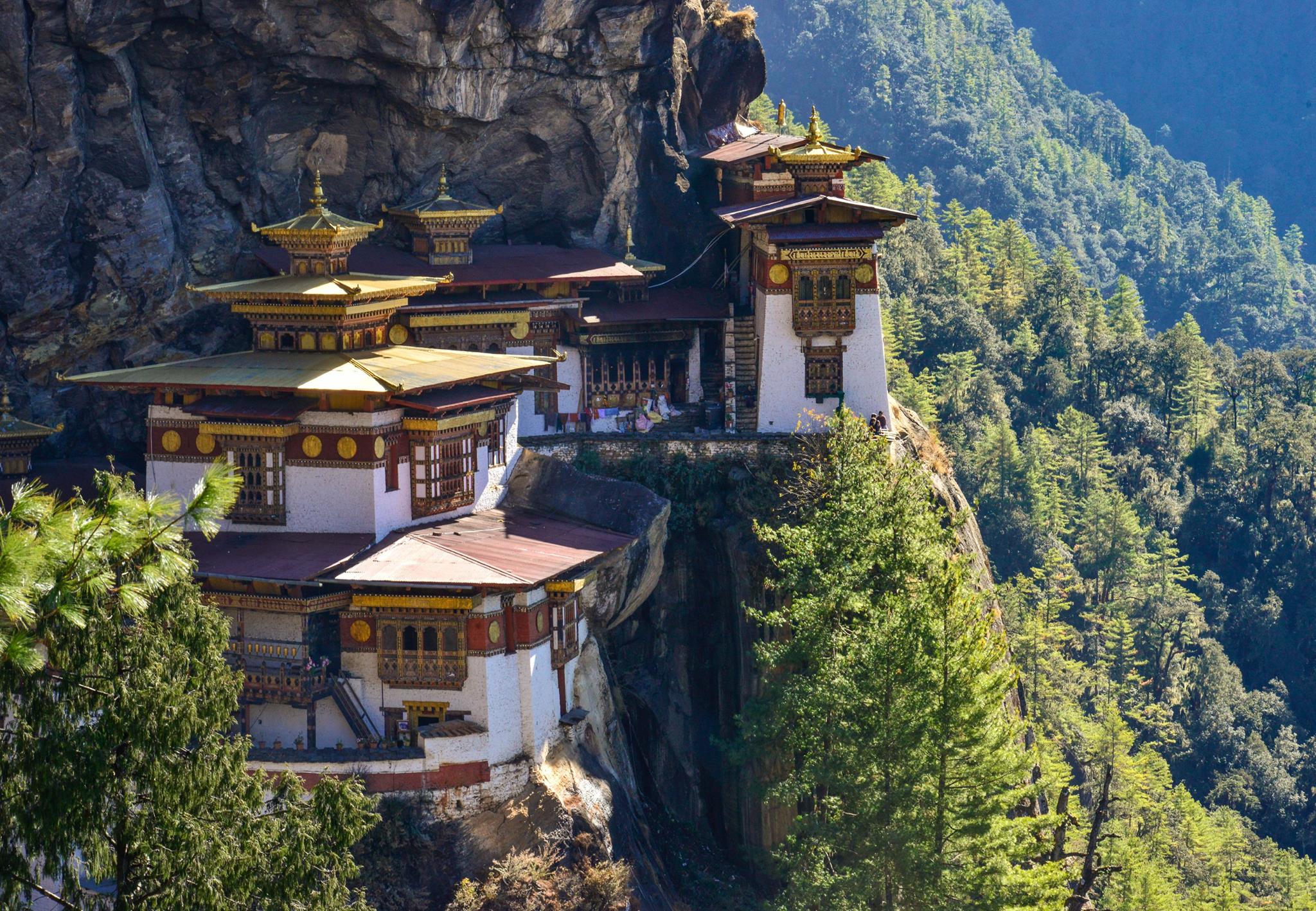 However, it’s still a minor feat for me, with a steep climb up one peak followed by 700 steps down to the canyon base and back up again to the monastery (stairs that need to be repeated on the hike home). Thankfully, once you make it to the shrine and take in the soaring views across the Kingdom’s mountainous interior, you’re guaranteed your biggest Bhutanese smile yet.