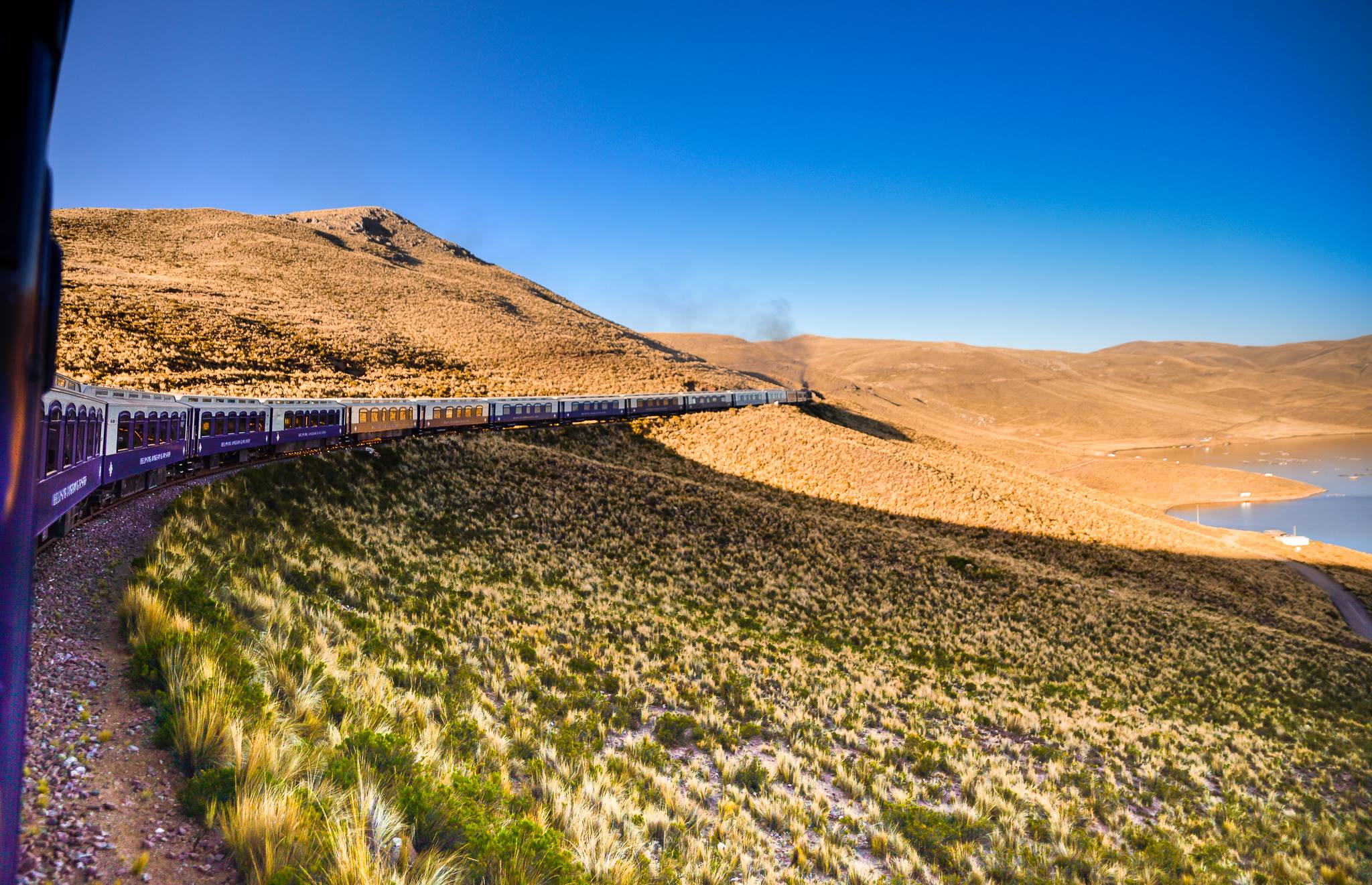 With the launch of the Belmond Andean Explorer, Peru finally welcomes its own golden age of rail travel, discovers Nick Walton.

If I ever needed a Panama hat, a linen suit, and perhaps even a carnation, this just might be the time. As I run my hands down the gleaming midnight blue and ivory coachwork of the new Belmond Andean Explorer train, the morning sun catching her brass accents as she sits at Cusco’s dusty Wanchaq Station, a dance troupe begins striding its way through the Peruvian Marinera Norteña courting dance to a trio of acoustic guitars, and the station master rings the bell for boarding. Our adventure across the Peruvian Highlands is beginning.

READ: This Downunder Wildlife Lodge Will Blow You Away

It’s a timeless scene that belongs to the beginning of every great rail journey, one filled with anticipation of the road ahead, a healthy dose of pageantry and promise, and a hint of the romance of life on the rails. It’s also a moment that’s taken a little longer to reach South America than other parts of the map. However, with the May launch of the Belmond Andean Explorer, South America’s first luxury overnight train, Peru can finally celebrate its own golden age of train travel, just in time for the world to fall in love with slow travel all over again.

I join my fellow passengers in the train’s outdoor observation car, which is adjacent to the Observation Lounge, one of two bar cars, to sip silky pisco sours and soak up the crisp alpine air of the Incan capital as it wakes, the music slowly being replaced by the buzz of traffic, the calls of stallholders at morning markets, and the squealed greetings of children in vibrant woollen caps waiting at rail crossings.

I love travelling by train, I always have, and clearly, I’m not alone. The night before, at Belmond’s breathtakingly-beautiful Hotel Monasterio, a former monastery dating from 1592, where I stayed for a night to acclimatise to the altitude of the world’s second-highest plateau, I met some of my new travelling companions over drinks in the verdant courtyard. There’s a Cuban music executive from Miami travelling with his family; a couple from Britain ticking off the world’s greatest rail journeys from their bucket list; an Indian couple from New York treating their parents to a South American adventure, and a Swiss couple travelling with their adult children.

The excitement in the air is palpable – many booked their train adventure more than 18 months ago, when Belmond, which operate some of the world’s most iconic trains, including the Venice-Simplon Orient-Express, the Royal Scotsman, Asia’s Eastern & Oriental Express, and the new Grand Hibernian in Ireland, first announced the new Peruvian project. Many had already travelled on the Hiram Bingham, a Belmond day train launched in 1999 that travels between Cusco and the Incan ruins at Machu Picchu, so expectations were high.

As we leave the suburbs behind the next morning and delve into a series of deep rocky valleys, Andean condors soaring high above, I leave the observation car to explore my new confines. The Belmond Andean Explorer is the newest incarnation of the Great South Pacific Express, a Belmond train which ran between Sydney and Kuranda in Queensland from 1999 until 2003. The train was shipped to Peru and reimagined by interior designer Inge Moore of London’s Muza Lab, who retained many elements of
the original train, which was itself designed around the glamourous heyday of rail travel in Europe.

READ: We Put Etihad’s 787 Business Class Through its Paces

Consequently, my 13sqm double bed cabin, one of 24 staterooms catering to just 48 passengers, features a private ensuite, twin picture windows, and a duo of armchairs, in addition to moulded facades, gleaming Art Deco-inspired air vents, fleur-de-lys marquetry, and vintage light switches that have survived to light another day. Sadly, the only thing missing was the promised wifi, a point of some contention with some social media-starved passengers.

It’s from my cabin that I watch the light drain from the sky as we climb into the Andes, the last rays of golden light flickering above a horizon dominated by brooding, mountainous silhouettes, leaving behind glowing, violet dusk. We chug to a stop at La Raya, at 14,250 feet above sea level the highest point on the train’s two-night 700-kilometre-long Peruvian Highlands itinerary, one of four offered by Belmond. As guests leave the train, stretching their legs, and exploring the tiny, whitewashed chapel that stands beside the tracks, the train’s waiters, immaculate in white shirts and leather suspenders, serve mugs of piping hot almond milk, the steam from our excited conversations suspended like speech bubbles in the chilly evening air.

“There’s nothing quite like being at the top of the world,” says train manager Christopher Mendoza as we marvel at the towering peaks that surround us. “Maybe it’s the air, maybe it’s the lack of air, but there’s just something magical about the Andes.” When it’s time to leave La Raya, we return en masse to the outdoor observation car again, enthralled by the transition of day into night high in the Andes, fending off the night’s chilly fingers for as long as we can with a barrage of baby alpaca shawls and dirty martinis, before eventually retreating inside and making our way to dinner.

READ: A Safari to the Land the Moves Forever

It’s not just the vistas that capture imaginations on the Belmond Andean Explorer. The inspired cuisine of executive chef Diego Muñoz (of Astrid y Gastón fame) is packed with flavour, colour and innovation and runs the gamut from lingering breakfasts, served as the train rides the soaring ridges above Lake Saracocha, and sun-kissed lunches backdropped by the three volcanic peaks which ring the White City of Arequipa, to indulgent wine-paired dinners that are packed with locally-sourced produce. Corvina a la
plancha, seared seabass with Andean mint-scented broad beans; caracara, local citrus, poached with cardamom and thyme; and, for the intrepid, al dente alpaca tortellini, all grace the menu and are expertly matched with South American wines.

The brilliant service of the Belmond Andean Explorer also extends well beyond the dining car; the crew is ever-attendant, ever-resplendent; a fortifying pisco sour, a pot of muña tea to relieve altitude sickness, or even an indulgent refill of your cabin’s personal oxygen tank is only ever a push of a button away.

The next morning, I rise early and delve into the chilly air with the train’s silver-tongued excursion manager Ari as he hosts a spectacular sunrise photo-op over the tranquil waters of Lake Titicaca. The Belmond Andean Explorer had rumbled into the waterfront town of Puno as we slept, and now we’re perfectly positioned for a day out on the world’s highest navigable lake. Docked beside the train, the beautiful steamship SS Ollanta was the largest vessel to ply Titicaca; built in the UK in 1929 and reassembled in Peru, there’s talk that Belmond intends to restore the vessel and employ her on the lake in the coming years.

A clutch of excursions along the route between Cusco and Arequipa – some included in the tariff, some additional – help break up hours swaying and bouncing down Peru’s undulating tracks, and include a visit to the Incan ruins of Raqch’I, and in the desolate beauty of the National Reserve of Aguada Blanca and Salinas, a chance to gaze upon the 7,000-year-old rock art of the Sumbay Caves.

Under a blazing sun, we set off in a flotilla of local boats, first paying a visit to the Uros people of Lake Titicaca, famed for their floating totora reed villages, before journeying on to the idyllic, Unesco-listed island of Taquile, renowned for its pre-Incan terraces. We climb up stony paths from the beach to meet some of the island’s 2,000 inhabitants and learn about their rich textile heritage. On the island, which follows strictly-controlled sustainable farming practices and has no transportation, motorised or other, knitting is exclusively performed by men and is taught from a young age. Different woollen caps, different designs, and different colours tell the story of the wearer, his family origins, and his marital status.

As elders perform traditional dances in a sun-kissed courtyard, we take a perch on vintage chairs that once graced the lounge car of the Great South Pacific Express and dine on locally-grown quinoa and rainbow trout from the lake, the imposing glaciers of neighbouring Bolivia visible across the water. We return to the pier, sunburnt and sated, for afternoon tea, served in a restored warehouse, the train ready to depart only steps away, the sun already ducking behind the peaks that ring Puno.

The next day, after another early wake-up call, this time to capture the sunrise over Lake Saracocha, the train weaves its way along vertiginous ridges bathed in rich golden light, before diving into the dramatic
landscape of the desert, the volcanos Misti and Chachani dominating the horizon.

I’m sad to leave the train, sad to leave its gentle (and sometimes not so gentle) samba, the tranquility of my cabin, and the cool evening breeze of the observation car, but at Kilometer 93, a staging point in the middle of a volcanic desert populated by llamas and skittish, ginger-coloured vicuña, I leave with a handful of other guests. This point is closest to the highway to the Colca Canyon, one of the deepest in the world, and the Belmond Las Casitas which clings to its ancient pre- Incan terraces.

However, I’m content in the knowledge that finally fellow lovers of slow travel can explore this unique destination as travellers have for generations, one stretch of track at a time.

Fly: American Airlines connects Europe, Asia, and the US with its extensive Latin America network.

Train: From US$1,800 per deluxe cabin, twin share, for the one-night Spirit of the Water itinerary and US$4,630 per deluxe cabin for the Peruvian Highlands itinerary, inclusive of meals, and beverages. Surcharges apply for some excursions.