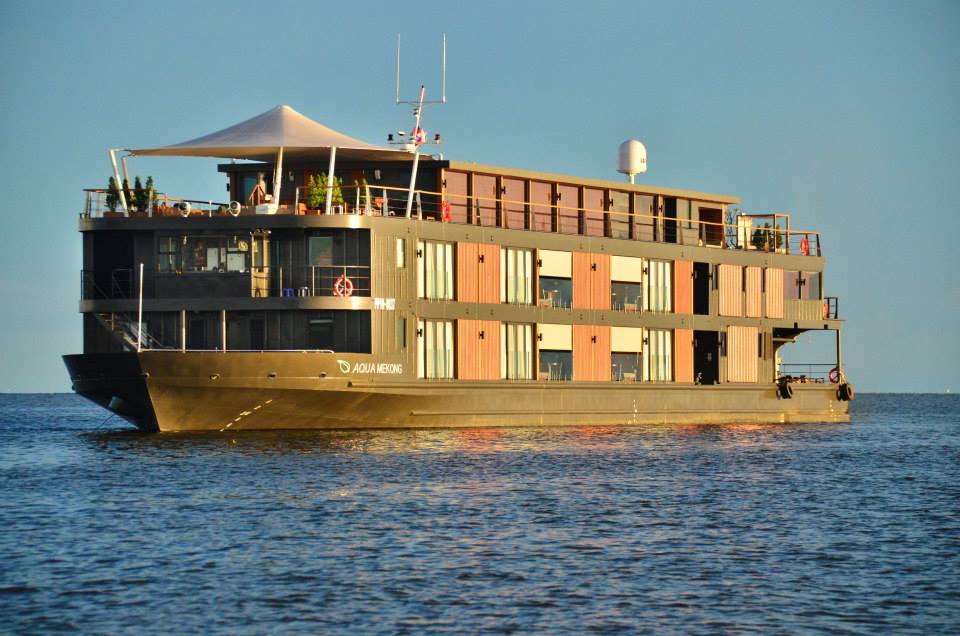 It’s cocktail hour and in the dimly lit lounge, a bartender shakes up a storm as the last brushstrokes of the day fade on the horizon. Darkness comes quickly on Cambodia’s Tonle Sap Lake, as if a giant vacuum has sucked up all the light, leaving only inky darkness punctuated by the bumblebee sounds of fishermen’s long tail boats as they head out on the night’s catch. It’s a breathtaking transition, enjoyed from a unique perspective; the beautifully-styled Aqua Mekong river cruiser is by far the most luxurious way to experience Tonle Sap and the mighty Mekong River, two waterways that are vital to Indochina. Combining the chic décor and personalized service of an inner-city boutique hotel with the cultural immersion that comes with life on the waters of Cambodia, Aqua Mekong heralds a new era in high-end tourism for one of Indochina’s least visited corners.

It’s the first night of our four-night itinerary as we cruise from Siem Reap, home to Angkor Wat, Cambodia’s tourism legacy, across the ocean-like lake and down to the capital, Phnom Penh, from where the ship continues on the Mekong into Vietnam. The route and the many excursions along the way are explained by the ship’s team of Cambodian and Vietnamese guides during the first nightly briefing. In the comfort of the ship’s intimate lounge, with its polished wood floors, floor-to-ceiling windows, and bespoke furniture, the guides map out our progress east and south across the vast expanses of Tonle Sap as the captain raises the ship’s anchor beyond, and we begin to cruise into the darkness. 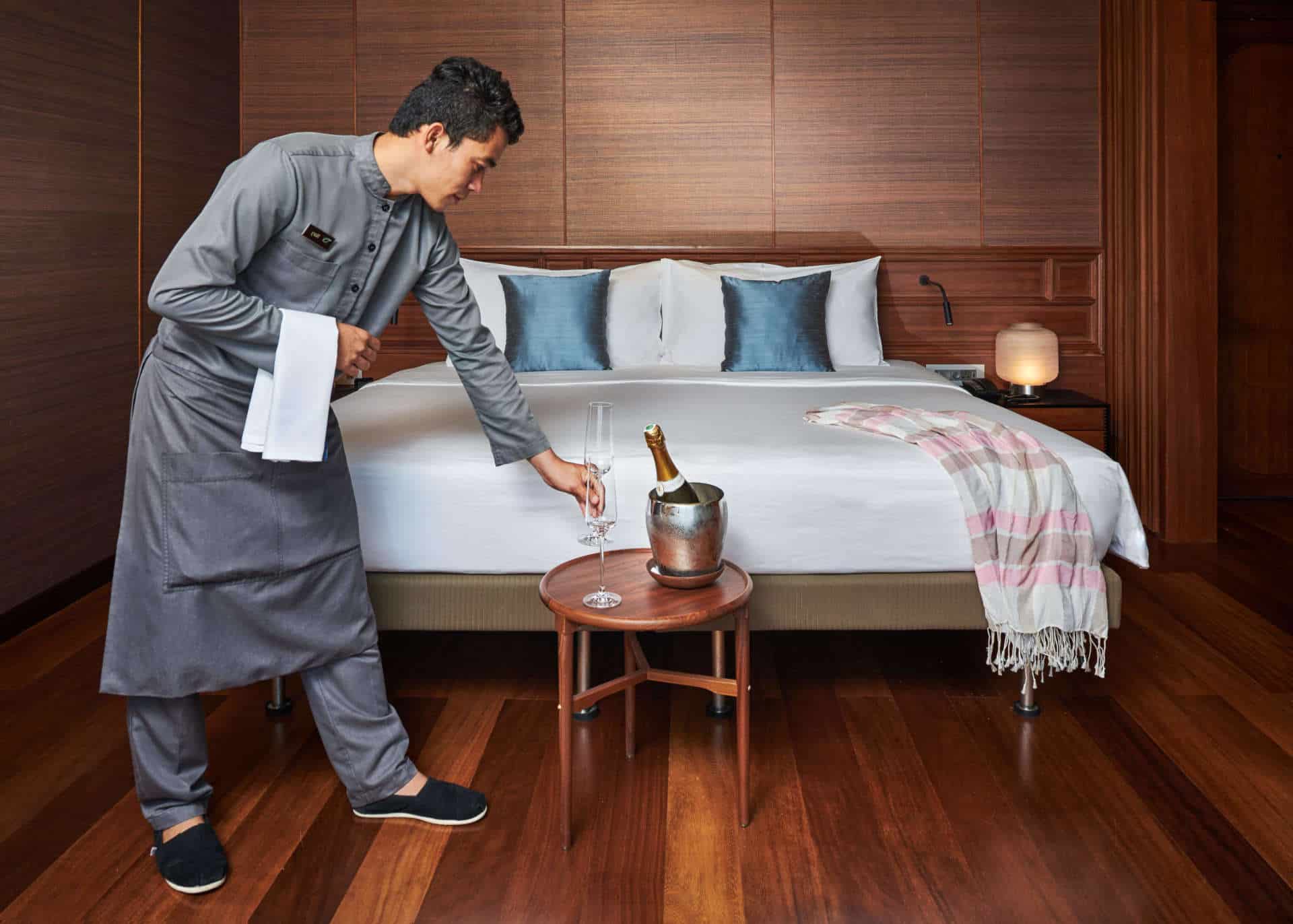 Tonle Sap Lake is perfect for expeditionary cruising. A vast, dumbbell-shaped body of water, it’s a crucial ecosystem, and home to over a million people whose lives and livelihoods ebb and flow with the lake’s waters. During the wet season, when flood waters from the Himalayas expand Tonle Sap to 12,000 square kilometers, making it one of Asia’s largest freshwater lakes, its floating fishing communities move together into deeper water. During the dry season, when we visit, the lake shrinks to 2,500 square kilometers, its villages returning to the lake banks en mass and the waters of the Tonle Sap Lake reversing in a unique hydrodynamic phenomenon that can be seen from the ship.

Aqua Mekong is operated by Aqua Expeditions, an expeditionary cruising company owned by Italian-American Francesco Galli Zugaro that has vessels in Cambodia, Indonesia, the Galapogas Islands and on the Amazon. His passion for expeditionary cruising was forged during years working with a cruise line in the Galapagos Islands and many of my fellow guests, who number just 27, have cruised with the company before.

Designed by Saigon-based architect David Hodkinson and built in shipyards in Singapore, Aqua Mekong was the first five-star vessel on the Mekong, a river that’s increasingly sought after by intrepid travellers.  Dressed in the natural tones of polished wood and locally-sourced fabrics, the Aqua Mekong is spacious, airy, and modern without being flashy. The ship’s 20 Design Suites – eight of which feature private balconies – weigh in at a surprising 30 square meters and are minimalist yet welcoming, with plush twin day beds wreathing French door-styled windows, addictively-good king sized beds and walk-in rain showers. It’s also the little touches that go a long way, from the Nespresso coffee machine and built-in USB connectivity to the complimentary WiFi service and a triple-fold turndown service that makes coming back from excursions and dream. For the ultimate indulgence, interconnecting suites may be booked together to create private living rooms and multiple bedrooms. 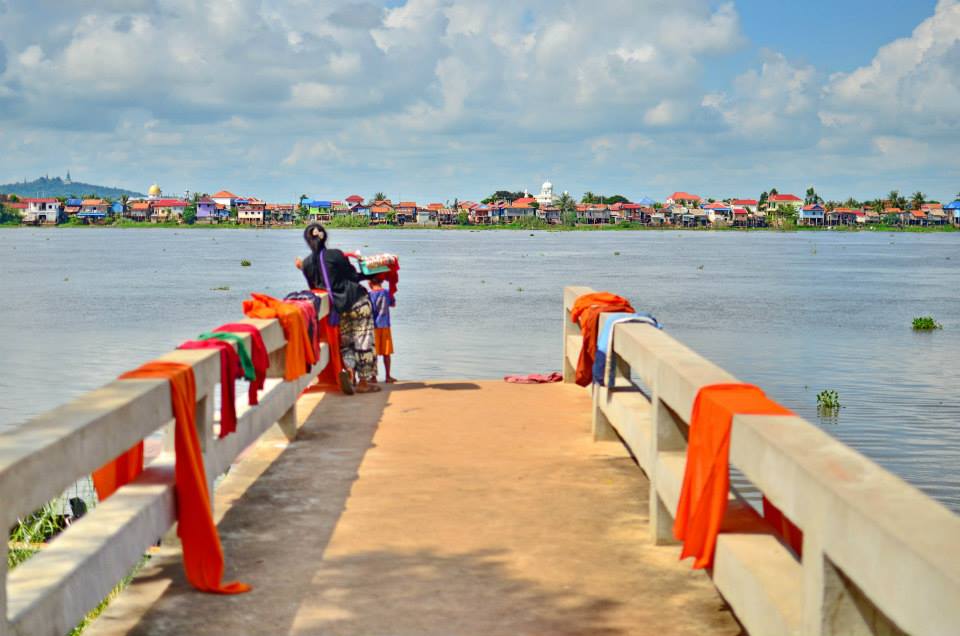 Despite its expeditionary credentials, modern touches extend throughout the Aqua Mekong, from the bar on the top deck, with its collection of small-batch rums and inventive evening cocktails, to the plunge pool perched above the bow, to the intimate day spa. A crew ratio of 1:1 and a menu created by Michelin-starred chef David Thompson ensure this is no simple river meander.

Early the next morning, we depart the ship on the modern skiffs that had brought us from the pier outside Siem Reap. These powerful vessels – the only ones of their kind on the lake – are a signature of the Aqua experience and offer guests a chance to explore deep within this unique aquatic landscape. Loaded with cameras and Aqua water thermoses – one of many green initiatives created by the company – we set off, bound for the flooded forests of the Prek Toal Bird Sanctuary, a fundamental component of the Unesco-recognised Tonle Sap Biosphere Reserve which encompasses Cambodia’s Great Lake.

Regarded as the single most important breeding ground in Southeast Asia for many threatened waterbird species, the sanctuary covers an impressive 31,282 hectares in the lake’s northwest corner and is the perfect first excursion for Aqua Mekong’s newest guests. The company has entered into a partnership with the sanctuary’s research station that allows the ship to use its own skiffs rather than the station’s rather dubious options. The Mercury engines of the skiffs run almost silently, and we cruise through the flooded landscape with breaths caught as we spy flocks of great egrets and Indian shags. Atop trees slowly dying from their guano, Oriental darters parade before us, their outstretched wings drying in the sun, while squadrons of giant pelicans patrol above, their expansive wingspan allowing them to glide high above the flooded vista with ease. 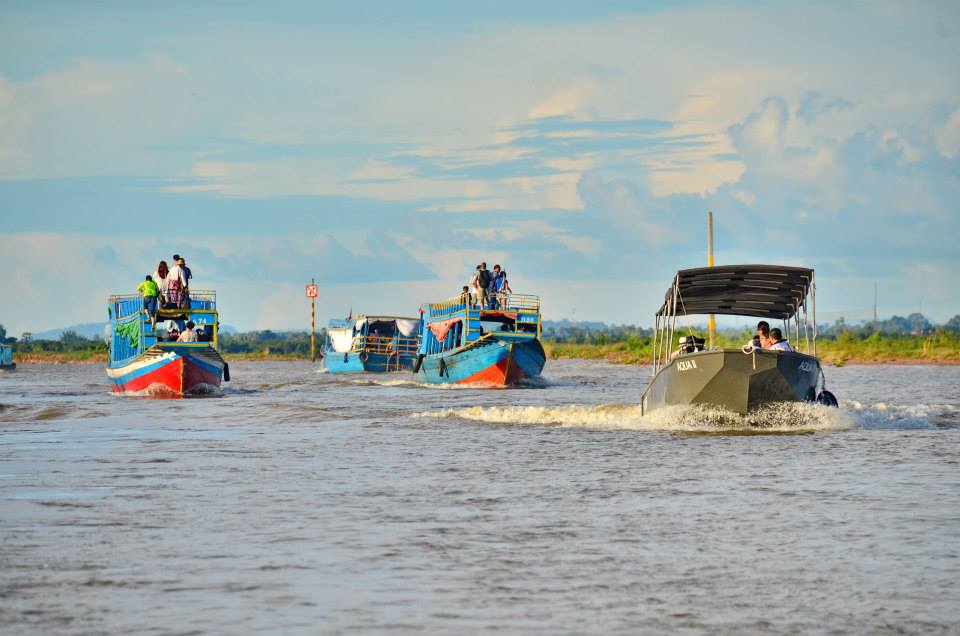 Under one large water-wreathed tree, we chat with three poachers-turned-rangers; the sanctuary is home to many endangered species, and hunters who once preyed on the migratory visitors now protect them at 36 ranger stations. Armed with rifles and radios, and perched in tree houses for days at a time, the rangers maintain passage through the sanctuary, guarding the many species passing through the submerged forests, especially during the dry season when the numbers of birds are highest. We keep one eye on the trees and another at their base in search of elusive Siamese crocodiles.

In the afternoon, as the heat of the day begins to ebb, we set out again, this time bound for one of the lake’s many floating villages. In tiny Kampong Khleang, children and adults alike glide through mirror-like waters on traditional long boats, leaving lingering wakes that wash against homes perched on pontoons. Fish farming is a core business on the lake, and each simple home is attached to netted tanks of thrashing catfish.

We head on, navigating by line of sign and GPS through the labyrinth of tree tops which reach over eight meters from the lake bed. Pure white herons burst from the foliage and into a sky that’s vivid blue as the floating village of Moat Kla emerges from a sea of green trees and reflected clouds, excited children rushing to doorways and waving frantically as we cruise by. Dusk begins to stretch across the sky as our pair of skiffs, a makeshift convoy of local boats in our wake, beeline for the village’s tiny floating temple, where a wizened old monk and three novices greet us with a blessing chant that dances across the water. It’s nothing short of magical. 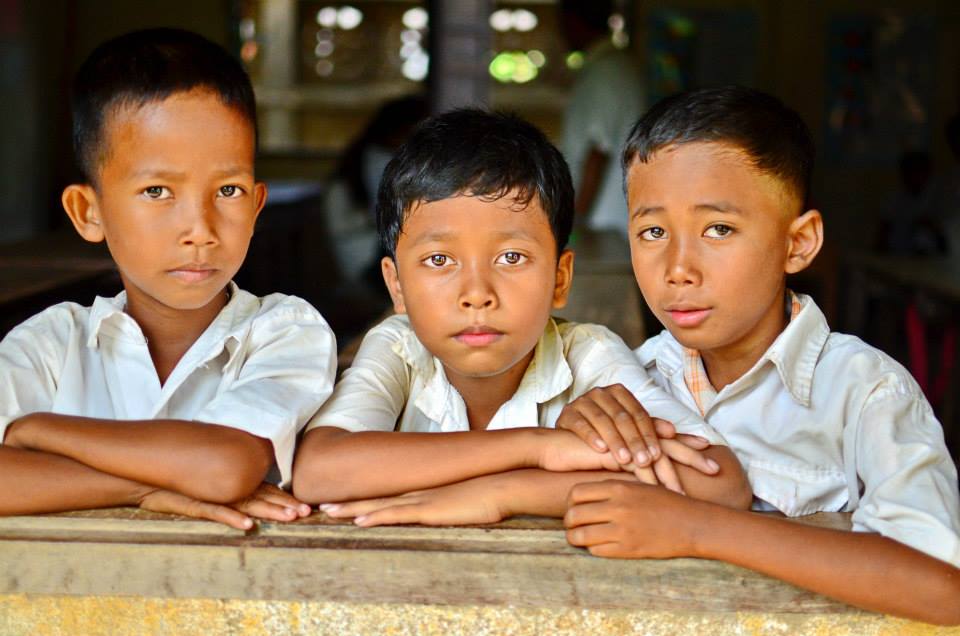 The inclusive excursions, combined with the comforts of one of the most modern ship on Asia’s rivers, make Aqua Expeditions’ offering unique. During the four-day itinerary, we visit floating and stilted communities, some thriving towns, others intimate, isolated villages; we visit families that have crafted silver and silk for generations, and are welcomed into homes to experience life on the lake first-hand. In Chnok Tru, I watch as massive ice blocks are shredded at a floating ice factory, and as homes and stores are formed into convoys to be repositioned in deeper water. In tiny Koh Oknha Tey, we visit a local school and take turns donating stationery supplies and sing with the children, and among the palm plantations of Kampong  Chhnang, we watch Angkorian pottery respun and sip palm nectar in the shade. It’s cultural immersion with creature comforts.

Of course, it’s no hardship returning each evening to cocktail hour in the lounge and David Thompson’s stunning cuisine in the ship’s intimate dining room. Famed for being awarded the first ever Michelin star for a restaurant serving Southeast Asian cuisine, on Aqua Mekong, Thompson serves up delectable dishes as sharing platters, the daily changing menus laced with signature favourites, from river prawns with tamarind and palm sugar served on betel leaves, to sticky ribs, green papaya salad and fiery coconut laksa. Locally sourced ingredients, including Khmer Kampot black pepper, Mekong River catfish and prawns, and fruit from the markets of Siem Reap and Phnom Penh ensure brilliant flavor combinations and insightful cuisine throughout our cruise, even if a few passengers had their palates – and spice tolerance – tested. 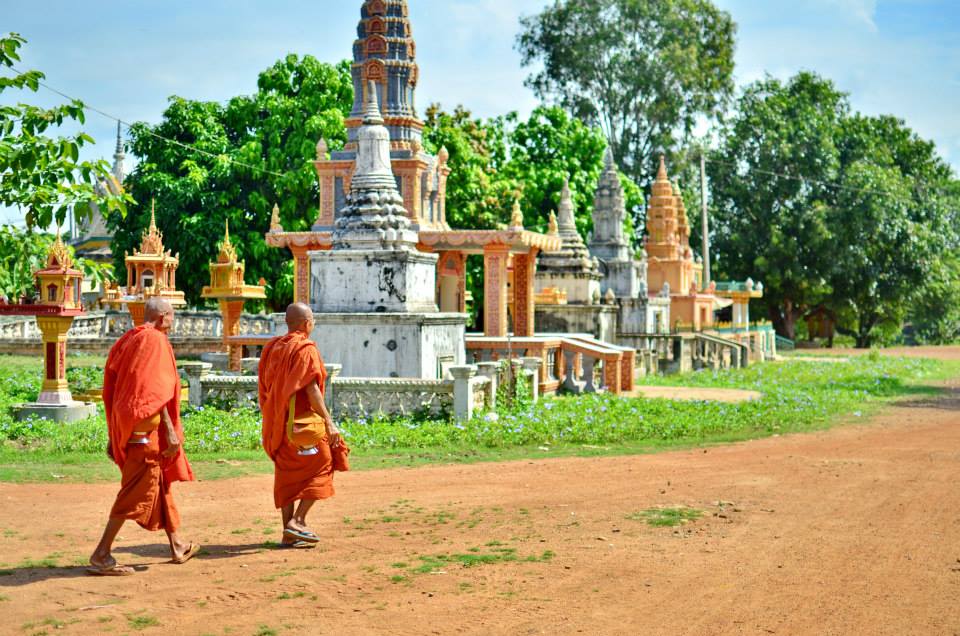 And then, each evening, it’s back to the lounge or one of two outdoor decks, to watch fisherman lure their catch with green fluro bar lights that sway in the evening breeze, and to listen as silence cascades across the Great Lake once more.