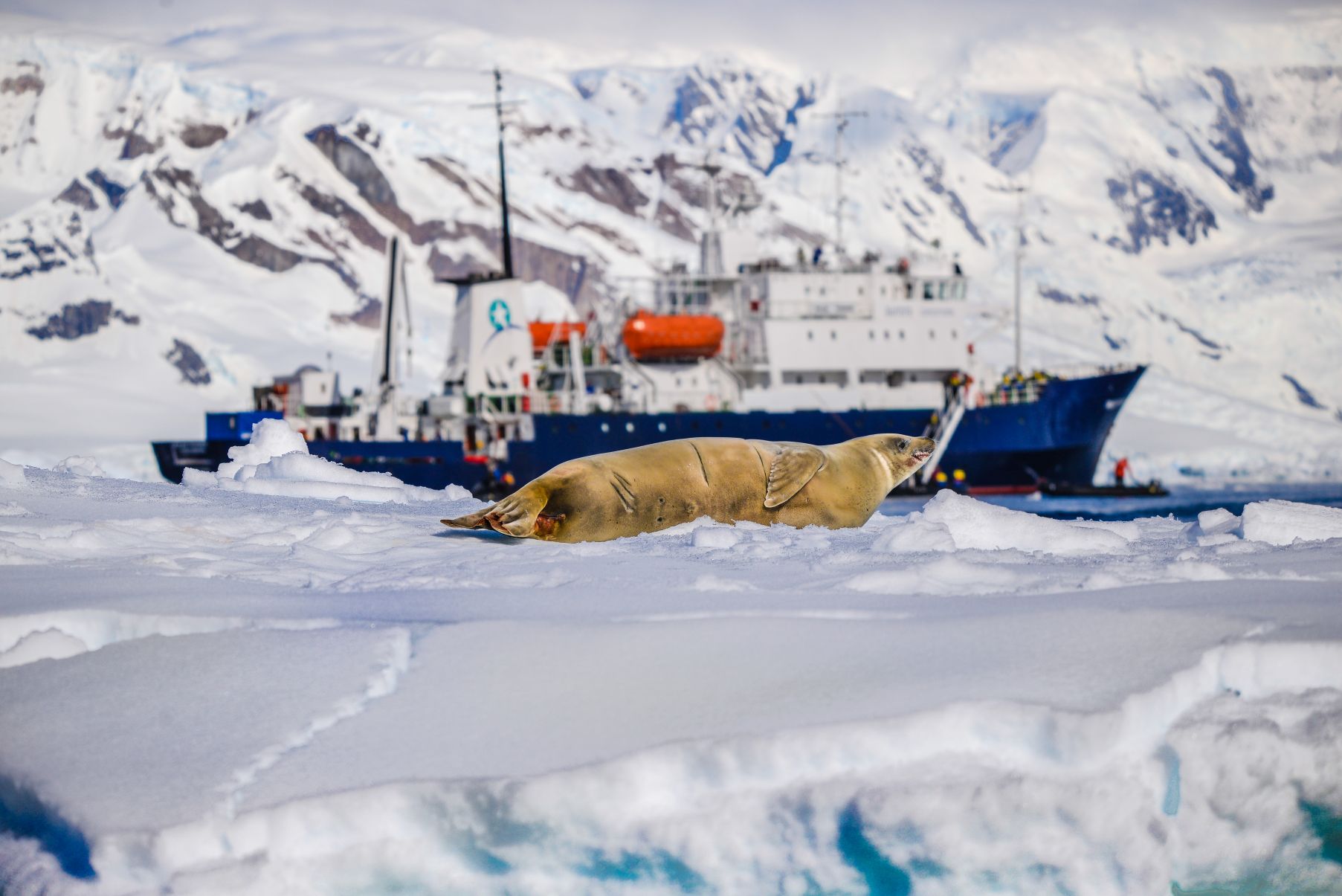 With steam billowing from my mouth and snow up to my knees, I summit the small hill on the largest of the Aitcho Islands, in the South Shetland chain, to a round of gurgling applause from the local Gentoo penguin colony.

As nice as it is to be recognised, approval from the residents on this desolately beautiful rock isn’t the only reward for the 30 hours flying and two days sailing it took to get here; the view across English Strait, which is bathed in glorious golden sunlight despite the late hour, is truly magnificent. If I was an explorer of old, glaring out from thick, round goggles, my beard flecked with icicles, I’d be looking for a good spot to raise my flag. I settle for erecting a tripod instead, as black and white chinstraps and gentoos the size of house cats fuss around my feet, oblivious to the wonder of their home or the captivated imagination of its newest visitor.

Tiny, unassuming Aitcho is the first dry land we’ve encountered since our ship, Aurora Expeditions’ pint-sized Polar Pioneer, left Ushuaia, at the southern tip of Argentina, three days before. There, the port was busy with ships bound for the Falklands, South Georgia, and the Antarctic Peninsula as an ever-increasing number of affluent and intrepid travelers make for the White Continent and its unique, awe-inspiring landscapes.

Our first day aboard is more reminiscent of a weekend pleasure cruise to some secluded picnic spot than the beginning of an epic expedition as we ply the calm waters of the Beagle Channel, enjoying glorious sunshine and views of the snow-dusted peaks which ring Ushuaia’s harbor. We mingle with fellow explorers from across the globe, pose for photos on the Pioneer’s bow, and trace the flight paths of sheathbills and sleek cormorants as they race across the glistening water in formation, their reflections never quite catching up.

Just after dinner, our expedition leader Dr. Gary Miller, a veteran of the polar regions, announces our arrival at the Drake Passage and it’s time to batten down the hatches as we enter some of the most tumultuous waters on the globe.

There’s nothing quite like five-meter swells and 40-knot winds to bring out the explorer in you, and Aurora’s open bridge policy ensures those who venture up the ship’s narrow staircases feel like part of the Russian crew as they cling to supports and watch whitecaps slam against the hull, a cascade of cold, green sea pounding against the bridge’s windows. That’s what Antarctica cruising is all about; it’s a journey to a remote land wreathed by turbulent seas and capped with inhospitable ice, ensuring only the most willing ever venture this far south.

The Drake Passage and the icy environment are not the only detractors; international conventions strictly enforce rules on the number of tourists allowed to visit each season, ensuring the White Continent remains pristine.

The few cruise companies that are allowed to land passengers on the continent (most of the estimated 40,000 visitors annually arrive by ship, with many on ‘cruise by’ itineraries that never actually land) are regulated by the International Association of Antarctic Tour Operators and the number of travelers allowed on the ice at any one time, and what they do
when they arrive, is all strictly monitored.

Aurora Expeditions has been cruising to the Antarctic Peninsula, as well as many other remote locations, since the 1990s, and offers a truly authentic take on polar exploration for a lucky handful of travelers; the Polar Pioneer, a former Russian spy ship that’s much smaller than many of the other vessels that venture so far south, is far from luxurious. But instead its hardy crew, comfort cuisine, and compact but practical cabins offer a true sense of how the many scientific teams live as they visit the White Continent.

In fact, Aurora’s marine crew is complemented by a dedicated team of polar junkies – naturalists, biologists, and photographers – on hand to lead visitors through this truly unique encounter with guided excursions and insightful onboard briefings.

The atmosphere is positively electric through the ship’s narrow confines two days later as the swells finally relent and Gary announces that we’ve made good progress through the ‘Dreaded Drake’ and have arrived in Antarctic waters with time for an evening landing in the South Shetlands. Our complement of 50 passengers scrambles into thick rubber moon boots and bright blue Aurora Expeditions jackets, cameras at the ready as they line the decks waiting for their turn to clamber down the gangway to a waiting zodiac, and the prospect of our first steps on Antarctica.

The few hours spent on Aitcho are the first of a dozen such excursions that come part and parcel with an Aurora Expeditions cruise. By night the ship navigates the frozen coastline, through the South Shetlands, and then on to the Antarctic mainland itself, giving guests a chance to walk, climb, and even – in a rare opportunity only offered by a few expeditionary cruise lines – camp a night on the ice.

At Hydrurga Rocks, two small, snow and ice-covered rocky islands in the Palmer Archipeligo, we watch Weddell seals and a solitary leopard seal lounging on the ice, the sensational views of the Buache and Modey Peaks, towering mountains on nearby Two Hummock Island, acting as a dramatic backdrop. In narrow, sheltered Neko Harbour, on the west coast of Graham Land on the Antarctic Peninsula, passengers who had signed up for climbing follow their guides high above the bay, while the rest of us tour a sea of towering icebergs by Zodiac, serenaded by the penguins of a vast Gentoo colony perched on rocks overlooking the harbor as the noisy birds warn off dark green skuas hoping to steal from their nests.

After our Russian captain crushes and barges our way through the ice of the mesmerizing Lemaire Channel, with virtually every passenger stooped over the rail on the ship’s foresail to watch the ice floes crack and capsize in our wake (we were the first ship to pass through this ice gauntlet in over a month), my brother Dan and I board a zodiac driven by Norwegian expedition photographer and bird fanatic Eirik Grønningsæter.

We leave the Polar Pioneer behind, its profile is quickly hidden by icebergs the size of double-story houses, and follow the reflection of the valley’s snowy peaks towards an endless expanse of ice floes. Here in the silence and majesty of Antarctica, we trace the wake of an inquisitive minke whale, capture the turquoise brilliance of freshly turned icebergs, and disturb the afternoon slumbers of a crab-eating seal, the sunshine setting his fur a brilliant golden hue.

We meet fellow explorers in Port Lockroy, one of the Peninsula’s most beautiful natural harbors and one that is ringed by the jagged, brutal peaks of the Seven Sisters to one side, and the imposing yet magnificent 1,415-metre high Savoia Peak on the other. Here, four scientists work through the summer months, tasked by the British Antarctic Heritage Trust to maintain and restore past settlements on the Peninsula, including historic Bransfield House, where the young scientists live.

Bransfield is part museum, part science camp, part gift shop, and we take turns leafing through the preserved kitchen’s cookbooks – which detail methods of cooking seal stew and penguin pie employed by early explorers – and send letters from the only post box in Antarctica. Beyond the tiny camp, whale skeletons reach up from the snow, penguins stumble their way across billiard table-flat sea ice, and blue-eyed shags take turns to race across the water and glide through the frozen thermals above the harbor. That night, a duo of humpbacks escort our ship, slipping effortlessly through the mirrorlike waters of the Gerlache Strait.

Finally, it’s our time to play true polar explorer, with two of Aurora’s most popular experiences, ice camping, and the polar plunge. The latter takes place on our afternoon in the Lemaire Chanel, where, under a dazzling sun, passengers of all ages leap from the ship’s deck, GoPro cameras at the ready, into the frozen waters, to rounds of applause from crew and guests alike. After the blinding cold of the Antarctic sea, the warmth of the sun is glorious and many passengers wander the decks in their swimming trunks, forgetting they’re on the cusp of the Antarctic Circle.

The ice camping is a much hardier experience but one that still seduces 80 percent of the ship’s contingent. Camping under the stars is one of the most popular in a raft of activities now offered by Aurora Expeditions; travelers can climb frozen mountain passes, kayak with specialist guides through fields of blue-white icebergs, and even snorkel and scuba dive on selected trips. While other companies offer a camping experience with tents and creature comforts, Aurora guests are encouraged to ‘rough it’ with nothing but sleeping bags between them and the awe-inspiring setting of an Antarctic summer night.

The crew ferry passengers loaded up with special sleeping bags and bedrolls to Useful Island, in the Gerlache Strait. Our little group works up a sweat digging a trench in the wind-hardened ice, piling the snow in a foot-high wall that will help protect us from the whipping polar gusts. Then we settle in for a night under summer skies, inquisitive Gentoos stumbling across the ice to take a peek, great waves of cloud spilling over the mountain tops ton the horizon, all of us snug in our sleeping bags basking in the silence of Antarctica.

We wave goodbye to Antarctica a few days later as the ship slips back into the tumultuous Drake Passage, the first heaving waves arriving mid-way through dinner. But the ice camping isn’t our last chance to explore the wonders of the deep south; after a rare landing at Cape Horn, where we climb the steep staircases to the top of wind-whipped sea cliffs and visit the sole Chilean naval family that protects this last outpost, the Polar Pioneer berths at Porto Williams, the first commercial cruise ship to ever conduct an itinerary turn around there.

The remote Chilean town aspires to compete with Ushuaia, another 50 kilometers down the Beagle Channel, and our band of now seasoned explorers makes history as the first polar tourists to disembark at its tiny pier. It’s a fitting end to an unforgettable adventure to the world’s last frozen frontier.