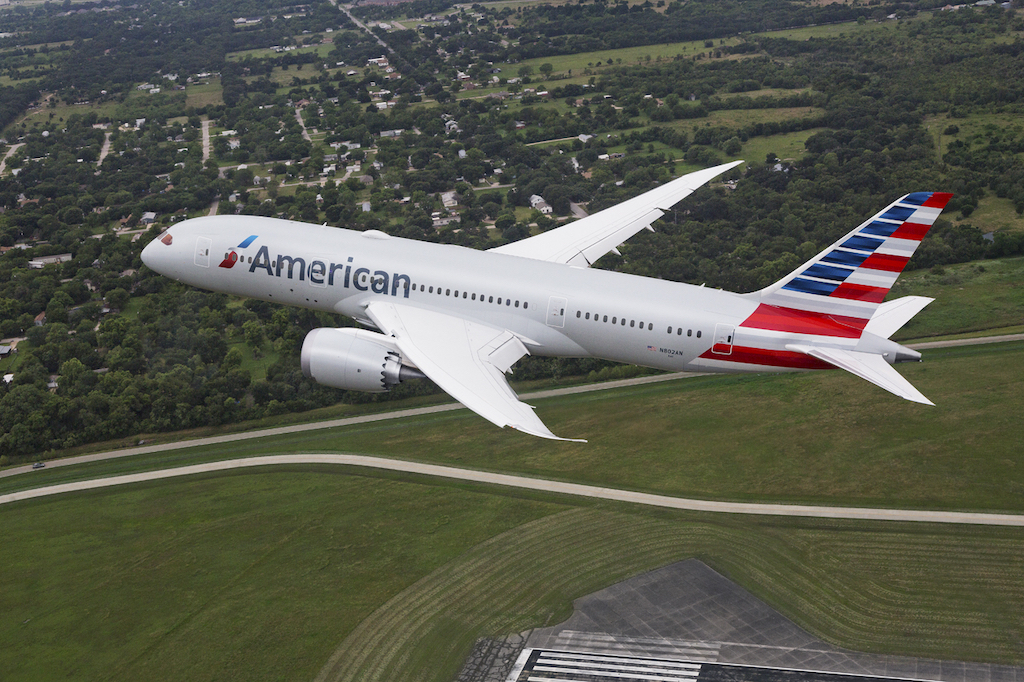 American Airlines is making moves to become North America’s leading carrier, and the new 787 Dreamliner is one of the most vital new additions it the carrier’s toolkit, discovers Nick Walton on a recent flight.

As I had checked in for my flight at my origin, Hong Kong, I made my way from my arrival gate directly to American Airlines’ Admiral’s Club in Terminal D. This spacious and well-used lounge features well-appointed shower suites, as well as a novel (and appreciated) guacamole stand, a sit-up cocktail bar, ample lounge seating overlooking the apron, and if you’re lucky enough to be flying in the airline’s Flagship First cabin (only available on selected long-haul routes) a signature dining room.

We boarded the two-class (although it also has the airline’s Main Cabin economy option) 787-8 at gate D33, entering the first of the aircraft’s two business class cabins, which boasts 20 of the 28 business class seats. Like many new business class products, the cabin initially looked very cramped, especially with the overhead bins open, but once you take a seat you realize there is an intelligent design at work. The cabin quickly filled up for the nine-hour overnight flight to Santiago, Chile.

This was my first time flying American Airlines’ newest generation business class product aboard the 787-8 and only my second ever time flying backward – the staggered 1-2-1 configuration means some seats face forward and some backward, although in a far more comfortable style than the fiasco you’ll find on British Airways’ A380.

My seat, 6L on the port side, facing the rear of the aircraft, is clearly well constructed and thoughtfully designed; there’s direct aisle access (which is infinitely better than the side-by-side window seats on United’s 787s), a large personal monitor, wide armrests on both sides, space for shoes under the ottoman-styled extension, slots for tablets or magazines, a pair of AC power points, as well as two USB ports, and two beautifully-large windows with electric ‘blinds’. 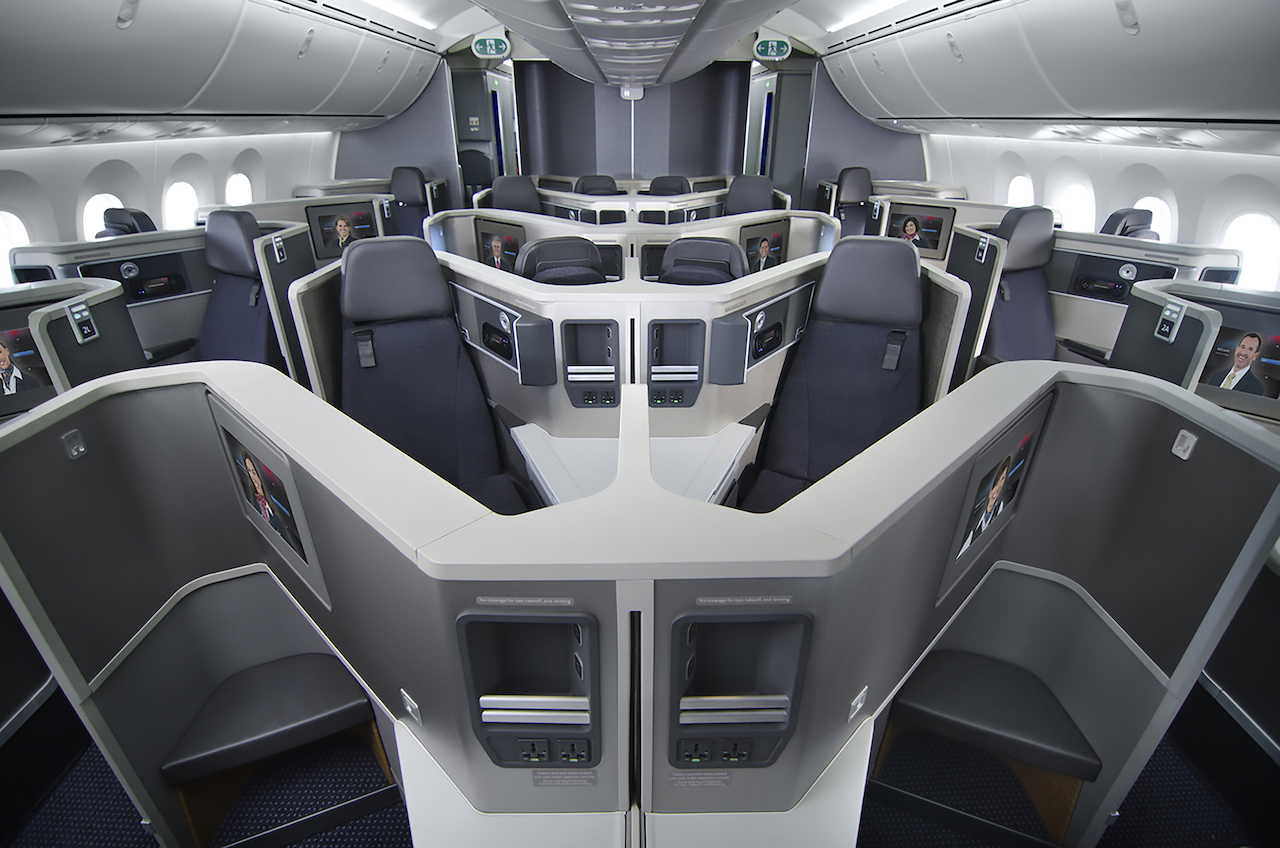 To one side is a pair of American Airlines’ signature Bose headphones, a bottle of water, and a chic amenity kit by Cole Haan. Two touchscreen panels, one with buttons, control the seat position, and inflight entertainment system.

There is a tradeoff – seats facing forward have armrests that can be lowered, thus increasing the seat’s 21-inch width to 26-inches, but backward-facing seats have more work surfaces. In addition, for couples traveling together, on rear-facing seats the privacy screen between center seats is permanently up, while on the forward-facing seats it’s permanently down, so make your seat choice accordingly.

After dinner, I converted my seat into a heavenly bed, complete with a warm duvet and a pair of pillows. Although the seat is a little shorter and narrower at the feet and shoulders than its brethren on the 777, it still all-but-guarantees a great sleep.

The dinner service on this south-bound flight began with a well-made gin and tonic and a bowl of warm nuts (although it did take quite a while to arrive as you’ll read below). As I had snacked in the Admiral’s Club before the flight and wanted to get as much sleep as possible, I decided to just enjoy the dinner entrée, a beautifully balanced dish of cold chicken with grilled five-spiced pineapple and watermelon that was accompanied by a loose-leaf salad with spicy sesame vinaigrette, and the cheese plate served with crackers and a glass of port.

As the business class cabin filled up crew offered sparkling wine and dinner menus. Unfortunately, after takeoff, the cabin attendant handling our side of the plane advised that because crew had not taken orders on the ground, the popular Express Option would not be available but she said she would try to get meals out as quickly as possible.

Many passengers chose instead not to have a late dinner or the early breakfast offered. Despite the hiccups, the dinner service was quick and efficient and friendly enough when it did start. 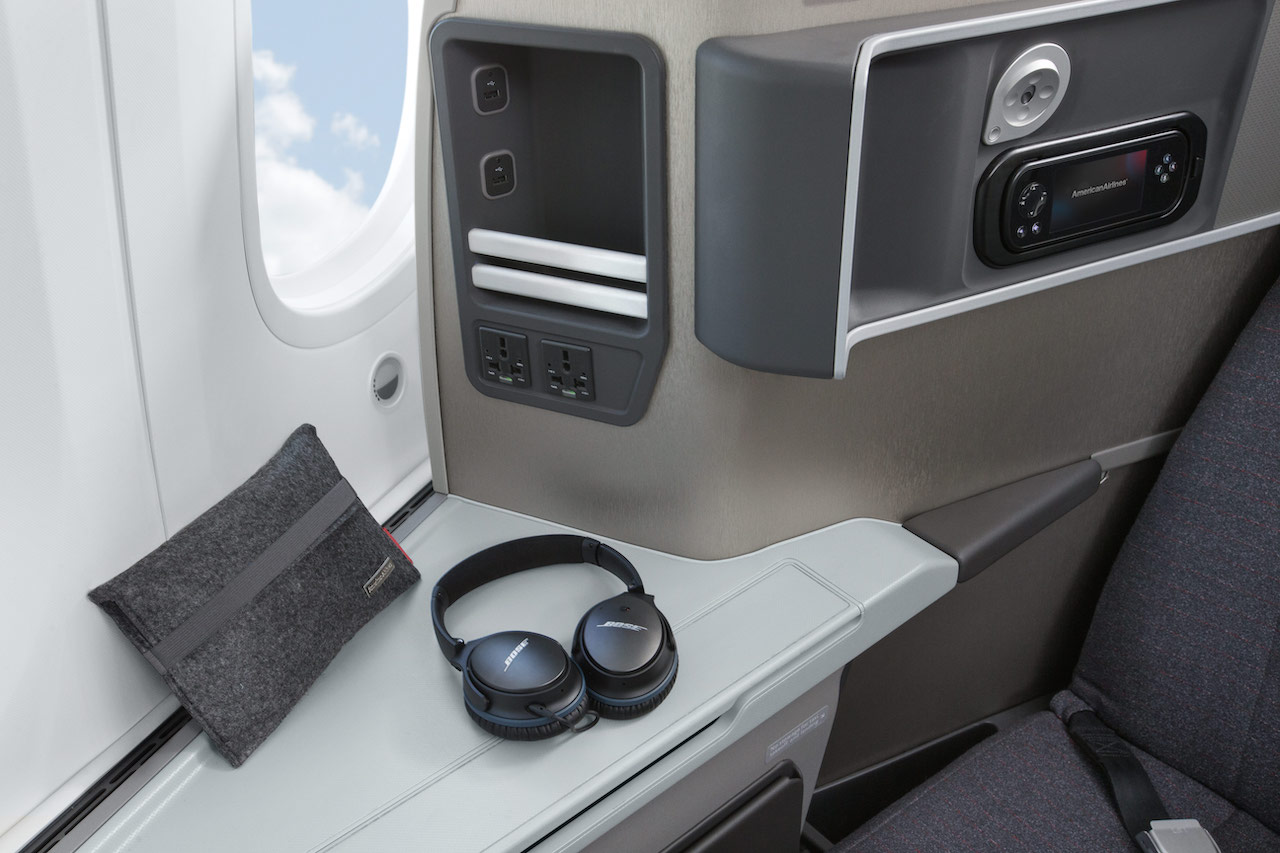 As with most overnight flights as soon as the lights were dimmed crew retreated to the galley, which was fine with me as I wanted to make the most of my seat-bed. I slept much of the flight and arrived in South America beautifully rested.

Latin and South America is American Airlines’ turf and the world-class 787 business class product is a sure way to maintain loyalty across the airline’s extensive network.

Headed for a European river cruise? Spend a couple

Discover the World has launched a series of new Eu

If you’re a fan of the chilly months, take a clo

Which lucky soul would you take here?

The luxurious Bulgari Hotel Paris opens on the cit

Escape to wine country with the opening of the all

The founders of Great Plains have created a line o

Looking for the ultimate Christmas celebration? Am

Perfect for travel, Sony has released its new Alph