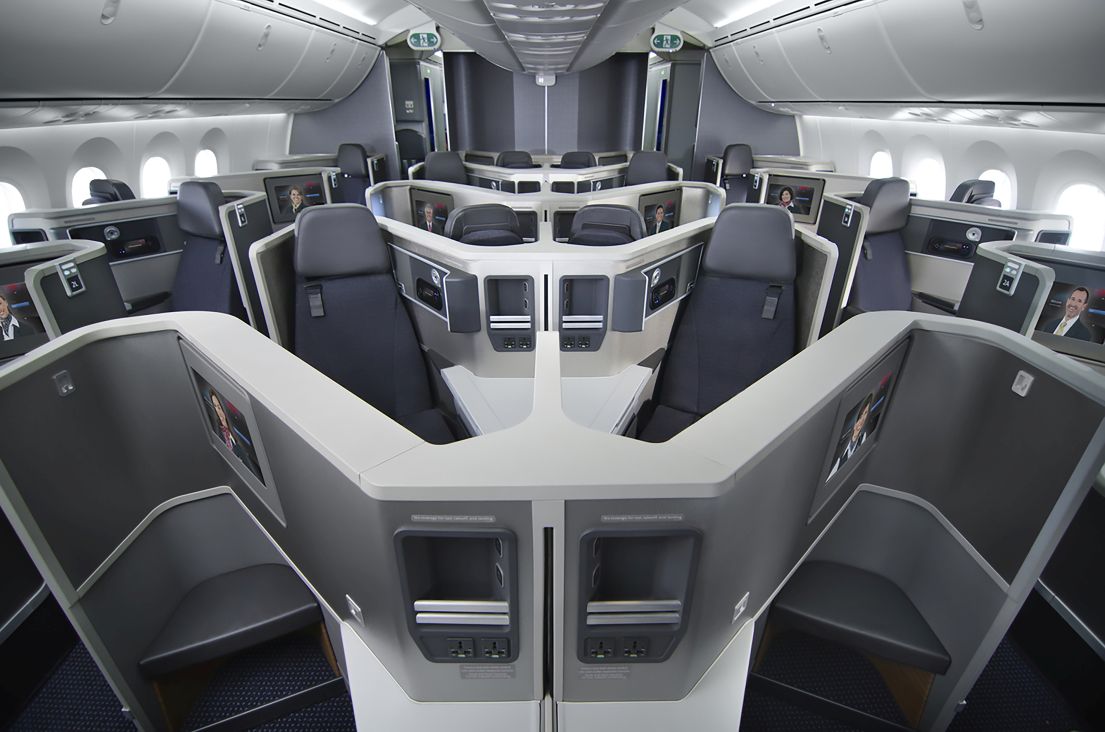 The new American Airlines Boeing 787 Dreamliner adds new levels of sophistication to the airline’s routes across Latin America, discovers Nick Walton on a recent flight between Dallas and Santiago.

There’s nothing like that new plane feel, which was evident as we boarded the American Airlines 787-8 at Dallas/Forth Worth International’s gate D33, entering the first of the aircraft’s two business class cabins, which combined boast a total of 28 business class seats. Like many new business class products, the cabin initially looked cramped, especially with the overhead bins open, but once you take a seat you realize there is intelligent design at work. The cabin quickly filled up for the nine-hour overnight flight to Santiago, Chile.

READ: This Downunder Wildlife Lodge Will Blow You Away

This was my first time flying American Airlines’ newest generation business class product aboard the 787-8 and only my second ever time flying backwards – the staggered 1-2-1 configuration means some seats face forward and some face aft, but AA has made it work.

My seat, 6L on the port side, was clearly well constructed and thoughtfully designed; there’s a large personal monitor, wide armrests, space for shoes under the ottoman-styled extension, slots for tablets or magazines, AC and USB ports, and two beautifully-large windows with electric ‘blinds’. Two touchscreen panels, one with buttons, control the seat position and inflight entertainment system. Already presented were a pair of American Airlines’ signature Bose headphones, a bottle of water, and a chic amenity kit by Cole Haan.

After dinner, I converted my seat into a heavenly bed, complete with a warm duvet and a pair of pillows. Although the seat is a tad shorter than its brethren on the 777, it still all-but-guarantees a great sleep at 38,000ft.

The dinner service on this south-bound flight began with a well-made gin and tonic and a bowl of warm nuts (although it did take quite a while to arrive as you’ll read below). As I had snacked in the Admiral’s Club in Dallas before the flight and wanted to get as much sleep as possible, I decided to just enjoy the dinner entrée, a beautifully balanced dish of cold chicken with grilled five-spiced pineapple and watermelon that was accompanied by a loose-leaf salad with spicy sesame vinaigrette and followed by a well-curated cheese plate.

Had dinner service been a bit quicker or the Express Option been available I would have opted for that. I also opted to just have coffee and yogurt as breakfast was served 90 minutes out from Santiago and I still had another flight to catch onwards to Punta Arenas.

As the business class cabin filled up in Dallas, crew offered sparkling wine in plastic glasses (something I still find curious and which is distinctly American Airlines) and dinner menus. The menu featured an Express Option (perfect for our 8 pm departure), and it was evident that many passengers would opt for it. Unfortunately, after takeoff, the cabin crew advised that because they had not taken orders on the ground, the Express Option would not be available. Consequently, many passengers chose not to dine.

Despite the hiccup, dinner service, when it did begin, an hour into the flight, was quick and efficient. Midway through the meal, crew dimmed the lights and the cabin took on a cozy, infinitely relaxing ambiance that helped passengers looking to get a full night’s rest.

The 787-8 seat may not quite offer the market-leading dimensions of its sibling aboard the airline’s 777-300ER, but it’s still an inspired piece of hardware and a sign of great things to come at American Airlines.

The only niggle about the 787 seat is that there is no compartment in which to store the sizable AA headphones, which are stowed in their own hard case. Service needs to be a bit more organized.

READ: We Put the Etihad 787 Business Class Through its Paces

Latin and South America is American Airlines’ turf and the world-class 787 business class product is a sure way to maintain loyalty across the airline’s extensive network.

American Airlines business class Dallas/Fort Worth – Santiago return from US$5,400 per person.